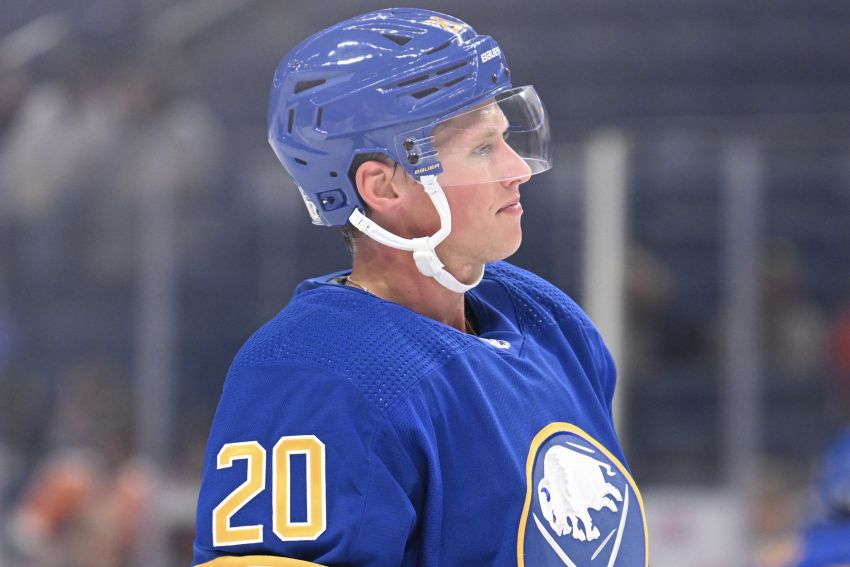 BUFFALO – Sabres defenseman Lawrence Pilut chose his words carefully, refusing to dwell on the past.

In 2020, Pilut bolted overseas, leaving the Sabres to join Chelyabinsk Traktor, a Kontinental Hockey League team in Russia. His decision stunned the Sabres’ old regime, which believed the Swede was on the cusp of securing regular NHL duty.

“I don’t want to talk about that too much,” Pilut, who reportedly wanted a one-way contract as a restricted free agent at the time, said of departing. “We kind of … butted heads a little bit. That’s how it is sometimes. But I felt what I did is best for me at that time.”

Chelyabinsk utilized him in every situation, playing him more than 20 minutes a game. He said he grew as a player and person, developing a stronger voice and becoming a leader, a role he takes pride in.

“You kind of find that stability in your game that you can go out and show every night, day in and day out,” Pilut said following Wednesday’s session of training camp at KeyBank Center. “And I think that’s something I’ve worked on, especially these past two years. … I feel coming back now I’m more confident in my game and comfortable out there.”

Still, Pilut, needed to get out. To return to Buffalo, he had his KHL contract voided.

On July 15, almost five months after Russia invaded Ukraine, he signed a one-year, two-way deal with the Sabres worth $750,000 in the NHL.

While he wouldn’t say much about leaving Chelyabinsk, he acknowledged it was a hard decision. Of course, many KHL imports had their contracts terminated and looked for work elsewhere after the war in Ukraine started.

This week, shortly after Russian President Vladimir Putin ordered a partial mobilization of Russian men to fight, the U.S. government again told Americans in Russia to leave the country.

“You just got to do what’s best for yourself in that moment,” Pilut said of his decision to return to Buffalo.

Through the first eight days of camp, the 5-foot-11, 184-pound Pilut has been one of the Sabres’ standouts.

In Sunday afternoon’s preseason opener, a 4-3 overtime road win against the Washington Capitals, he skated a game-high 22 minutes, 33 seconds and registered two assists. He also played in Tuesday’s 2-1 home win over the Philadelphia Flyers.

He could dress again in this afternoon’s home game against the Pittsburgh Penguins or Tuesday versus the Carolina Hurricanes.

Pilut has joined one of the league’s youngest blue lines. Of the 12 defensemen in camp on an NHL contract, he’s the second-oldest behind Ilya Lyubushkin, who’s just 28.

“I want to think of myself as still young,” said Pilut, who first signed with the Sabres as a free agent in 2018. “But, I mean, coming in and you see all these young guys and how well they’re doing here and how good they’re playing and how hard they’re competing, it’s awesome. I followed a lot of the team when I was away, I know a lot of the guys from when I was away, obviously, and their success has been awesome for me.

“And now coming back seeing … it’s just awesome to be back here with them.”

The excitement for the season can be heard in Pilut’s voice. Right now, he probably ranks eighth on the depth chart. Having played 46 career NHL games, he can be assigned to Rochester, where he spent parts of two seasons piling up points and starring for the AHL Americans, without waivers, according to capfriendly.com.

His early performance in camp and affable personality have made an impression on Sabres coach Don Granato, who was an assistant in 2019-20. As a puck-moving defenseman, he fits the Sabres’ style.

“I know we wanted him back and we were excited that he was coming back, and all of a sudden, he ended up in the KHL, which was very unfortunate because we were excited at the potential he had,” Granato said. “But he’s another guy that’s determined, he’s quick, he’s agile. His attributes fit the style we want to play – more aggressive, more assertive, more skating – out of our defensemen.

“And he fits the personality, too. I think he fits (in) our locker room very well. So I’m just excited, as anybody else, to watch him and continue to evaluate where he is and what he can do. It’s within a context of a training camp; it’s not within the context of regular-season NHL, so there’s still a curiosity on my side but a definite optimism.”

“The way he handles every player, comes up and speaks to us and helps us every day in and day out,” he said, “I feel it’s been great so far how he pushes us and how he wants us to play.”

One thought on “After two years in KHL, Lawrence Pilut returns to Sabres mature defenseman”