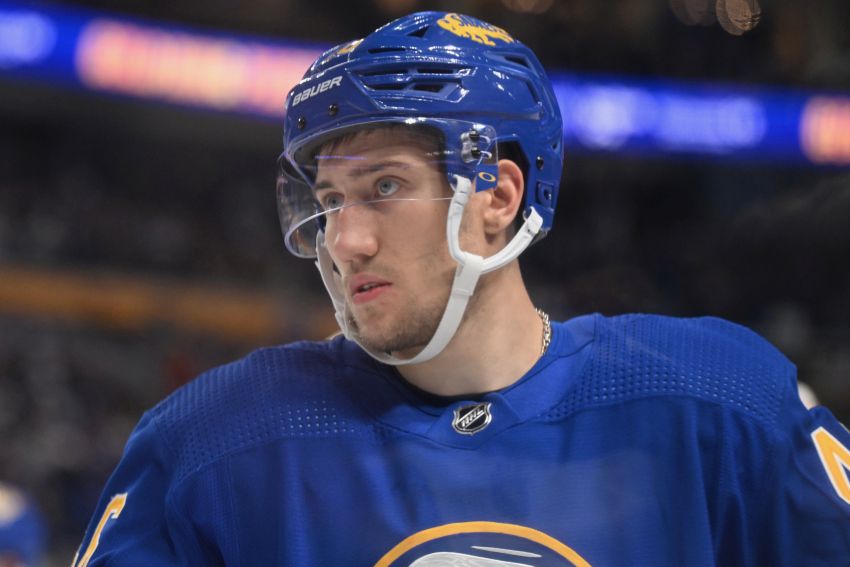 There’s the gritty, high-octane defenseman who’s detested by opponents. When Lyubushkin’s on the ice, you better have your head on a swivel.

“He’s a Russian bear,” captain Kyle Okposo said Monday in KeyBank Center after the Sabres prepared for tonight’s road game against Connor McDavid and the Edmonton Oilers. “We enjoy having him on our side, for sure. He plays a hard game, he plays a heavy game. That’s his game, that’s his job and he does it really well, and it bothers the other team.”

Off the ice, however, Lyubushkin, 28, is much more reserved. Jacob Bryson, his defense partner, called him “nicest guy” on the team.

“He comes in every day with a smile,” he said.

And, apparently, some jokes.

In his first weeks here, Lyubushkin has quickly fit in, giving the Sabres the physical defender they coveted and another popular presence in the dressing room.

“(There are) amazing guys here, (the) best teammates, all staff, all coaching staff, I enjoy being here,” said Lyubushkin, who signed a two-year, $5.5 million contract on July 13. “I feel like I’m back at home with (my) KHL team, Yaroslavl Lokomotiv.”

The 6-foot-2, 208-pound Lyubushkin is a relative newcomer to North America. He spent five seasons with Lokomotiv before joining the Arizona Coyotes in 2018. After three and a half years in the desert, the Coyotes traded him to the Toronto Maple Leafs last season.

The Sabres’ shopping list was short this offseason. Besides a goalie, they needed a veteran right-shot defender who possessed a different skill set than the rest of the blue line.

“He does what we don’t really have on our team, (that) is hit a lot of guys,” Bryson said of Lyubushkin, the Sabres’ oldest defenseman. “And he loves to play physical.”

Through two games, Lyubushkin has performed as advertised, registering a team-high seven hits and constantly annoying the opposition.

“He gives the group around him more confidence, more security because he plays with a lot of bite and grit,” said coach Don Granato, whose Sabres open a four-game, eight-day western road trip tonight. “And that is seen and felt by the rest of his teammates. You can see it on the bench, feel it on the bench. So we want him to be as physical as he wants to be. We will adjust what we need to from a systems standpoint to allow him to be physical.

In Thursday’s 4-1, season-opening win over the Ottawa Senators, Granato said Lyubushkin and Bryson, the third defense pairing on paper, outperformed the Sabres’ other combos.

Their Corsi For ranked first and second, respectively, among defensemen, with Bryson registering 65 percent and Lyubushkin recording 64.7 percent, according to NaturalStatTrick.com.

“They competed very, very well,” Granato said Friday. “They look another level in sync playing together in unison which early in the season you’re trying to build your system, build your team cohesiveness. Those two, to use a term, they played as a pair very well. Better than the other two pairs (Thursday). They were a little clunky, the other guys. We needed them. They were effective for us.”

Bryson, whose puck-moving skills are his greatest assets, said Lyubushkin is “easy” to play beside.

“He keeps it very simple, and I think that’s been the mindset of both me and him through the first two games is keep it simple,” he said. “We’re playing against the third, fourth line usually, it’s been effective.”

Lyubushkin said: “We’re just used to it and now know how we can play.”

Granato, however, wants Lyubushkin to reign in some of his aggressiveness.

“He is a gamer in the sense he competes, he competes to win, he really cares about his performance for the team,” he said Wednesday. “He’s a very team mindset guy. Takes his job very, very seriously. And my personal feeling is sometimes too serious, where he deserves a bit more calm in his game and he’ll play tight. But it matters so much to him.

“And, obviously, the physicality, the energy he brings, the personality he brings are all things we had heard about, we watched and we certainly like now that we’ve seen him here.”