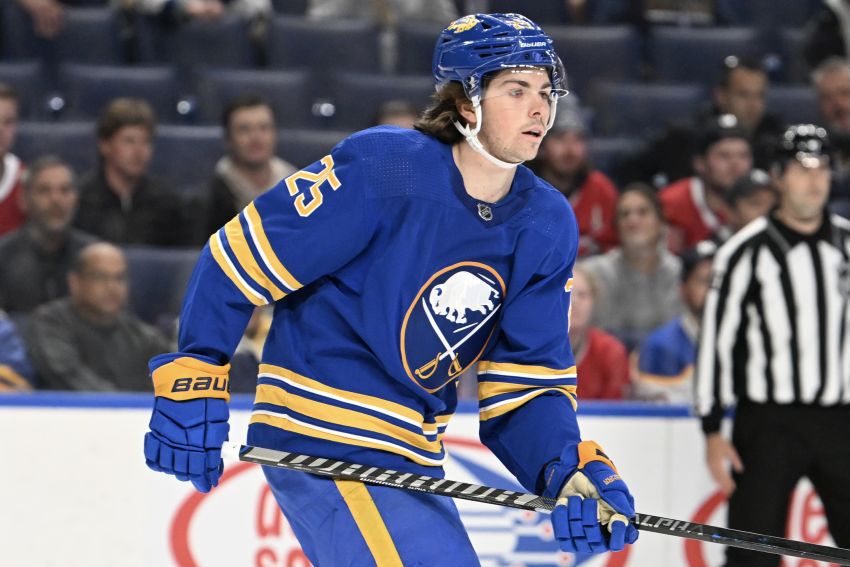 BUFFALO – As the seconds ticked down and the crowd grew restless, Sabres rookie Owen Power stayed calm, displaying poise that belies his age.

Power, 19, said he initially wanted to shoot when winger Victor Olofsson passed him the puck above the left circle. But he had a little space, and when he saw a seam open up, he adroitly fed Rasmus Dahlin, his defense partner, in the right circle.

“So many guys feel the pressure in the heat of the moment, they lose sight of plays that are on the ice and vision,” Sabres coach Don Granato said following Friday’s practice. “He didn’t on that play. That was a spectacular but subtle indication of how high is potential is, how high his talent is.”

Power struggled much of the night, as did most of his teammates. Still, the 6-foot-6, 218-pound youngster stands out more than many of the Sabres thanks to his size, status as the first overall pick in 2021 and position.

As a defenseman, he’s usually the last layer of help before the goalie. His mistakes become highlighted while those committed by others can often be blamed on him.

While none of Montreal’s goals can be directly tied to his miscues, Power was on the ice for all three of them.

Montreal’s first goal bounced off Power’s skate in front of the net after goalie Eric Comrie’s save. Seconds before the third one, he knocked Comrie’s rebound out of the air with his glove before Josh Anderson scored.

“Yeah, he was off, but so were about 12 others,” Granato said. “And if you say 12 other guys and nine of them are the guys in front of you, you’re picking up way more baggage that they left behind.”

At the end of the night, however, Power made a dynamic play that almost made everyone forget about anything that transpired earlier.

Injuries to Mattias Samuelsson and Henri Jokiharju have forced Granato to try several different defense pairings in the past week. Power, who started the season beside Jokiharju, played with Dahlin on Thursday.

“We had Owen and Dahls together for offensive reasons, they can possess the puck so well together,” Granato said.

Lawrence Pilut would be the odd defenseman out.

“Casey is very familiar with how we want to play, which I think is a help, obviously, right shot, left shot,” Granato said of why he paired Power with Fitzgerald. “… We’re going to split (Dahlin and Power) up tomorrow and hope that we can get a little bit more balance through the six by virtue of that. I think Fitzy’s a good complement.”

The Sabres, of course, expect Power will keep maturing. He has enjoyed a remarkable start to his career. Teenage defensemen, if they’re lucky to enough to experience the NHL, usually don’t have an immediate impact.

Less than a month before his 20th birthday, Power, who played his first eight games late last season, is averaging 22 minutes, 44 seconds of ice time a game this year.

Beyond his talent and smarts, Power’s drive has helped him develop into a special player.

Fitzgerald said Power’s teammates must “drag him off the ice sometimes.”