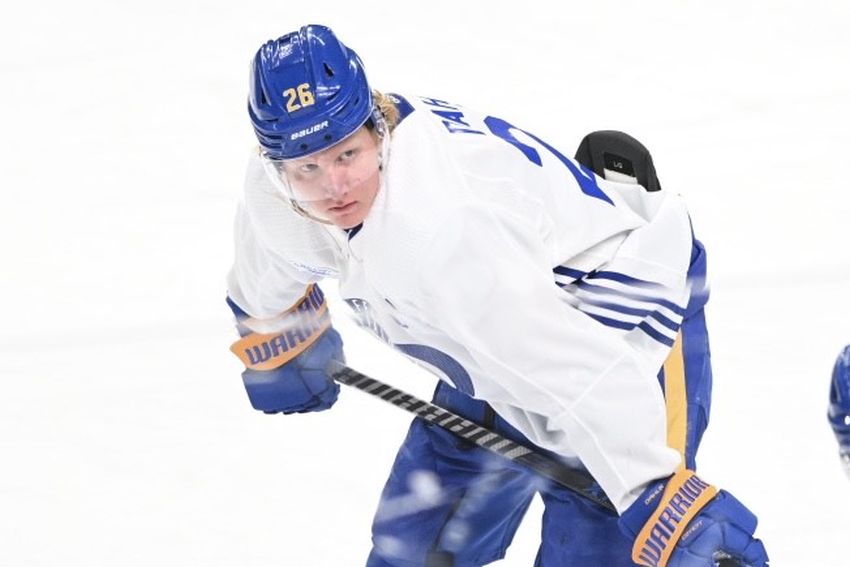 BUFFALO – Sabres defenseman Rasmus Dahlin can’t remember when it finally clicked for him, but at some point early last season, he stopped trying to impress others. He no longer cared what they thought about him.

Dahlin, 22, became comfortable in his own skin and quickly developed confidence. His play took off, and by February, he had earned his first spot in the NHL All-Star Game.

“I realized early last season that if I’m myself and not trying to be anyone, that’s going to help me on the ice,” Dahlin said Thursday following the first sessions of training camp at KeyBank Center. “I just keep doing that every day. Some guys are probably not going to like it. Some guys love it. I don’t know. I don’t really care.

“I just want to try and be myself. That helps me on the ice.”

On the ice, Dahlin, the first overall pick in 2018, possesses so much talent he could soon rank among the NHL’s elite defenseman. He’s one of only a handful of players capable of taking over a game when he grabs the puck.

Last year, the Swede, who’s beginning his fifth season, settled down and began to understand just how good he can be. For years, his competitiveness got the best of him. He put too much pressure on himself and had trouble letting go of mistakes.

“I sure have a lot of years in the league now,” Dahlin said. “It’s great because now I feel more comfortable. I’m not as nervous. I can prepare myself more and better now and I know what’s to come. I’m a little bit calmer nowadays.”

“What I saw from Rasmus was a maturity last year that even if things maybe weren’t going perfectly for him, there was a calmness and a belief that, ‘OK, I’m going out the next shift,’” he said. “I give … the coaching staff a lot of credit for that, because he had the confidence from them.

“If you made a mistake, you’re going right back out there, and you’re gonna fix it and he did. He self-corrected really well. He wants to learn.”

Adams said Dahlin has a “quiet swagger.” Sabres winger Kyle Okposo agreed, saying he has “quiet confidence about him.”

“The biggest thing that I noticed is that he’s comfortable in his own skin,” Okposo said. “He just looks like he’s matured about three years in the last 12 months. And that’s a really positive thing. It’s like he knows he doesn’t have to say stuff now and he’s not forcing it. It’s just who he is. He’s just competitive.”

Okposo, 34, said players must be comfortable enough with themselves to make difficult decisions.

“There’s times where young guys, they try to fit in and they try to do something that they’re not comfortable with because they feel like the group will accept that behavior,” he said. “And for him, to hear that quote (about no longer caring what others think) and for him to come to that realization is a huge thing. And I think it’s something that probably freed him up mentally and allowed his game to take off to another level.”

“Swagger to me is a confidence with a willingness to earn and re-earn it,” he said. “When you’re cocky, maybe you don’t feel you have to earn it, you earned it already. Rasmus is willing to earn it. He chirps another teammate in practice, he’ll go harder than them. He knows, he’ll challenge the guys in practice and call him out, and then he’ll hop in line and go one-on-one against him and say, ‘I’ll show you what I’m talking about. You, you’re not going hard enough and you’re not competing hard enough.’

“So he’ll back what he says. In my mind, you’ve earned that swagger. That’s a good, healthy swagger.”

Dahlin, of course, wants to experience the postseason badly. Right now, the Sabres have a record 11-year playoff drought.

He’s so competitive that simply watching some playoff games during the spring fired him up.

“I don’t really want to watch the playoffs but I can’t not watch it,” Dahlin said. “It’s such great hockey and you’ve got to follow it if you’re in the league, I feel like. It (ticks) you off, for sure. It’s not fun to see all the other teams succeed. I want to be in those shoes. It’s a love-hate relationship with the playoffs when you’re not in it.”

He added: “I am (ticked) because I’m jealous probably. I want to be in those shoes. I’d rather have myself there than anyone else.”