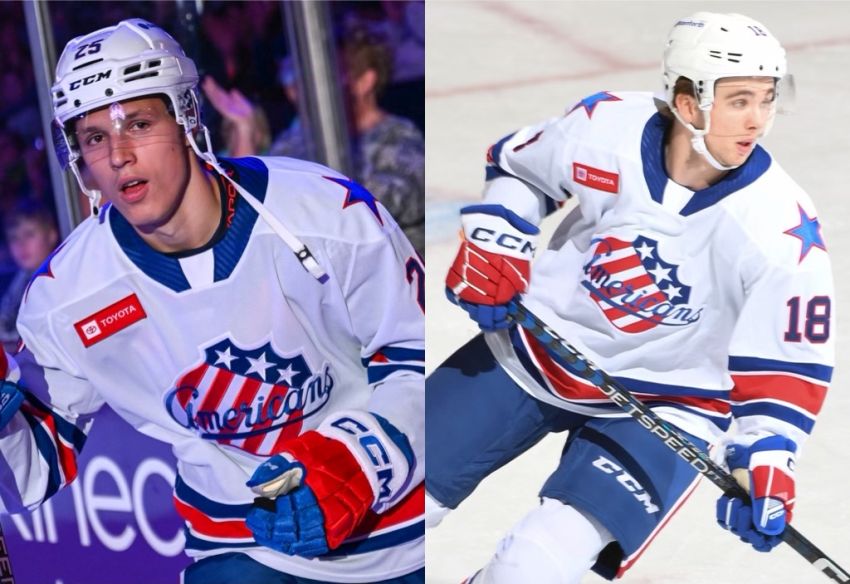 Before Buffalo Sabres prospects Jiri Kulich and Isak Rosen left Rochester to join their respective countries at the World Junior Championship, Americans coach Seth Appert challenged the youngsters to rely on more than their skill during the tournament.

He said the AHL rookies have evolved over the past three months, displaying a willingness to play on the inside and attack the net. Without the puck, they’ve learned how to forecheck and about the physicality needed to thrive in pro hockey.

The teenagers have developed into more complete forwards and Appert wanted them to carry that mature style into the prestigious tournament.

“Don’t go back to being the players you were in the summer,” Appert said on a Zoom call prior to Wednesday’s game against the Utica Comets at Blue Cross Arena. “In the summer they were both very good and they both had good World Junior tournaments (last season), but they still had junior hockey habits and they were better with the puck than they were without the puck.

“And they’ve grown so much in these 25 games, you want them to go back and be more of a dominant, physically engaged presence, not just an offensive player.”

Well, so far, Kulich, 18, and Rosen, 19, have been among the most dynamic players in the tournament.

Entering Wednesday’s games, Kulich, having recorded a hat trick for the Czech Republic in Tuesday’s 9-0 victory over Austria, had a tournament-high three goals in two outings. Meanwhile, Rosen had registered two goals and three points for Sweden in two contests.

“What we’ve seen in the first couple of games from both Rosen and Kulich has been real promising, that they’ve been taking some of the habits they’ve been putting in their game here and applying it,” Appert said.

Appert liked the way in which Kulich, the 28th overall pick this year, utilized his array of talents to score.

“He’s got a lethal shot and he does a good job of finding ways to get that off,” he said. “One of the goals, he found a way to come around the top and found some open ice, on a power-play situation, hit a one-timer. Another goal he was able to kind of lurk and find open ice on the back side on a five-on-five situation. And then the breakaway goal (to complete the hat trick) just showed his explosiveness and how attacking in nature that he’s starting to become more and more. That’s the biggest thing for us.”

It was a fast flying night of goals for Czechia, including the first hat trick for Jiri Kulich. #WorldJuniors @narodnitym pic.twitter.com/H1wTywpssA

Of course, Kulich and Rosen, the 14th overall pick in 2021, are no strangers to international play.

Still, having come to play pro hockey in North America, Kulich and Rosen weren’t sure if the Sabres would let them leave for the tournament that is being held in Halifax, Nova Scotia, and Moncton, New Brunswick. They could rejoin the Amerks as early as later next week.

“You could see the excitement when I talked to them about we were going to support them,” Appert said. “We know how special it is to put the jersey on for your country.”

Their special experience will likely be enhanced by the leadership role they both earned as alternate captains.

“It’s also really neat to see both of those guys wearing letters,” Appert said. “It’s not easy to do, you’re representing your country – some of the best players from your country. Sweden’s loaded with first-round picks. They have a lot of guys to put letters on. So it was neat to see Isak was wearing an assistant captain letter.

“Jiri’s wearing a letter as an underage (18), and it’s difficult as an underage to be a leader, to be a driver of your team. Usually that tournament’s dominated by the older players.”

Tonight’s Sabres home game against the Detroit Red Wings will likely go on as scheduled. The Buffalo Common Council announced on Wednesday night the driving ban in the city that had been in place since last weekend’s devastating blizzard would be lifted at 12:01 a.m. today.

The Sabres announced earlier Wednesday night that general manager Kevyn Adams plans to talk to the media at 10 a.m. today at KeyBank Center, an indication the ban would end and the game would be played.

Only players within walking distance of KeyBank Center have been able to skate downtown. The Sabres haven’t practiced as a team since last Thursday, before they began their Christmas break.

The Sabres will have a tremendous competitive disadvantage against the Red Wings, who have practiced following the Christmas break and played Wednesday in Pittsburgh against the Penguins.

Two Sabres games – last Friday’s against the Tampa Bay Lightning and Tuesday’s in Columbus versus the Blue Jackets – have already been postponed. They haven’t played since Dec. 19.

Youngstown native Joseph Cecconi on Wednesday played his third game for the Amerks and first at home after coming over on Dec. 15 in a trade with the Dallas Stars.

Cecconi, 25, played for the Jr. Sabres, an organization Adams used to run, as a teenager. Appert said he offered the defenseman a scholarship seven or eight years ago when he coached RPI. He ended up attending Michigan.

He spent three years with the Texas Stars, Dallas’ AHL affiliate, before the trade.

“A lot of familiarity,” Appert said of Cecconi. “(I) know he has high character, high compete, he’s a great teammate, he’s a really good defender, right? So it’s a new opportunity for him. It doesn’t mean you weren’t playing well in Dallas’ organization. But sometimes you go through a cycle of two or three years and other prospects start becoming the new shiny toys for that organization, and this is a new lease on life for him.

“He gets to come home, play in front of friends and family and play for an organization that he dreamed about being part of when he was a little kid.”