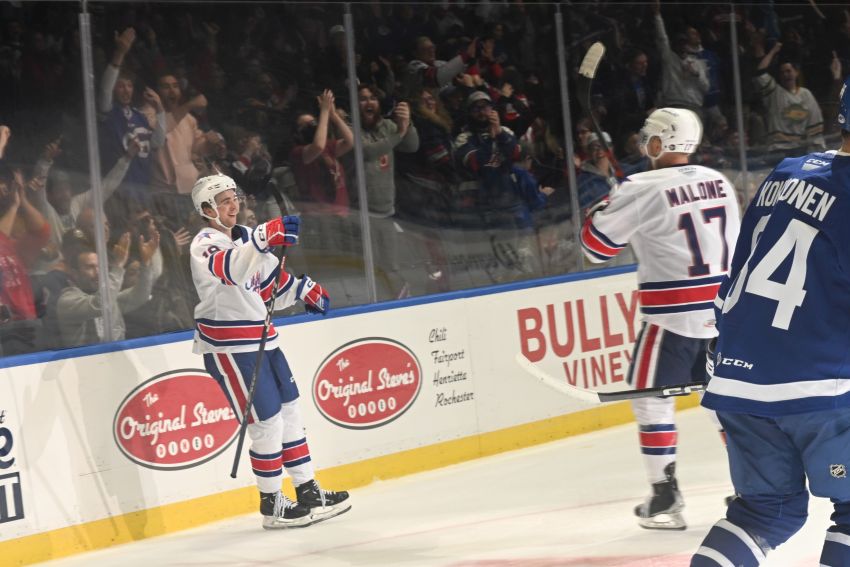 ROCHESTER – Americans winger Isak Rosen took off from the point, moving up as a penalty killer stumbled in his pursuit of defenseman Lawrence Pilut.

As Pilut fended off some hectoring, he fed the open Swede a soft pass in the right circle.

“Got it right into the wheelhouse,” Rosen said following Friday’s 4-2 win over the Toronto Marlies at Blue Cross Arena, his AHL debut.

“Not the hardest shot but it was a pretty good shot,” Rosen said.

The goal impressed Amerks coach Seth Appert a lot more than the rookie.

Having spent parts of the last three seasons in the Swedish Hockey League, the 5-foot-11, 163-pound Rosen possesses pro experience. Still, he must adjust to a faster, more physical brand of hockey in the AHL.

“I try just to adapt every shift on the ice,” he said. “It’s going to take some time.”

Malone pivoted JJ Peterka and Jack Quinn early last season as the rookies developed into two of the league’s most dynamic scoring threats. Peterka and Quinn, of course, earned promotions to Buffalo this season.

Appert believes putting Rosen with Malone can help him increase his tenacity.

“And so I think that’s an important aspect of Rosen’s game that’s we’re continuing to try to grow and develop is the puck battles and hunting the puck. I thought he did a really good job of that tonight.”