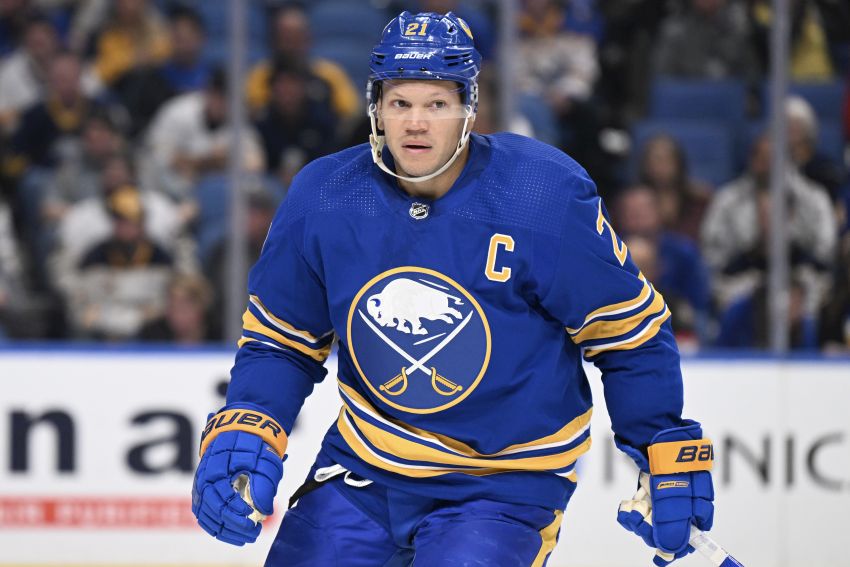 BUFFALO – Kevyn Adams’ mother-in-law lives about a half mile from him in Clarence, so on Christmas Eve, as a devastating blizzard ravaged the region, he decided to brave the elements and check on her.

“Wrapped up and got out there,” the general manager said prior to Thursday’s 6-3 win over the Detroit Red Wings at KeyBank Center, the Sabres’ first game since Dec.

The short walk ended up taking Adams two hours there and back.

“I’ve never seen anything like it,” he said of the ferocious storm.

On Friday, a day earlier, Sabres captain Kyle Okposo said his home lost power and his generator kept going in and out. After getting outside – no easy task – he hauled trash cans and plywood to the generator to keep the snow from clogging it while he spoke to the appliance company on the phone.

“Looking outside that first day, you’re walking down the stairs, you couldn’t see my neighbor’s house,” said Okposo, who scored a hat trick Thursday. “You know, it’s just the ferocity of it. And the staying power too was crazy.”

Sabres coach Don Granato said stepping into the wild weather felt like he was in a movie.

“You walked outside for a minute or two and that was it,” he said. “It felt like you were on a mountain top. So I can’t imagine the first responders and the people who had to deal with it.”

Following a week off, the Sabres returned to work Thursday in snow-ravaged Buffalo with heavy hearts.

The death toll in Erie County stood at 39 as of Thursday morning, according to county executive Mark Poloncarz, as the battered region continues to recover from the worst storm since the Blizzard of ‘77.

“I just want to offer my condolences to everybody who lost their lives in the storm,” Okposo said, echoing what Adams, Granato and his teammates said. “It … was horrific. It was terrifying at times. And I can’t imagine those families or people that lost loved ones.”

Prior to Thursday’s pregame skate, the Sabres hadn’t practiced as a team since last Thursday, when their Christmas break began. The storm forced the NHL to postpone Friday’s home game against the Tampa Bay Lightning and Tuesday’s road contest versus the Columbus Blue Jackets.

While every player who left town made it back safely, the driving ban in Buffalo, which was lifted Thursday, kept the team from gathering. Some players who live downtown walked to KeyBank Center to skate. Okposo said about eight players who live in the suburbs skated in Amherst at the Northtown Center.

The Sabres, of course, entered Thursday’s game with a huge competitive disadvantage against the Red Wings, who roared back from a 4-0 deficit Wednesday in Pittsburgh to stun the Penguins 5-4 in overtime.

Over 30 years and thousands of games coached, Granato said he had never experienced anything like Thursday’s contest. He said the storm has helped his players rally together “because they do feel part of the community.”

“This would be an unknown situation,” he said. “But what’s unique to me in all those games I’ve coached, there is some known here that would be unknown in all those other situations, and that is the deep sense of pride in being a Sabre right now by those guys in that room. They have embraced the challenge of our organization since I’ve been here over the last couple of years with pride that we’re going to do this, we’re going to get this thing going where it needs to go, we’re going to make people proud of this organization and what we do.”

Sabres defensemen Jacob Bryson and Owen Power, both of whom missed the last three games recovering from lower-body injuries, returned against the Red Wings.

To activate Bryson from injured reserve, the Sabres placed defenseman Lawrence Pilut on waivers prior to the game, according to capfriendly.com.

Pilut, who turns 27 today, compiled one goal and three points in 17 games during his recall. If he clears, he will likely be assigned to the Rochester Americans. He began the season in the AHL, playing three games.

The Swede returned to the Sabres organization this season after spending two years in the Kontinental Hockey League. He has recorded two goals and nine points in 63 career NHL games.