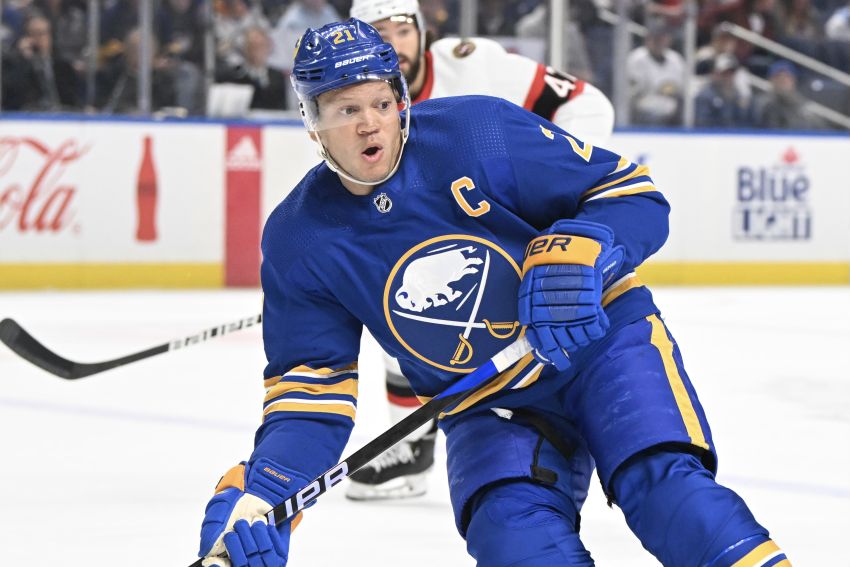 BUFFALO – Twenty-five games into his season, Kyle Okposo has beaten a goalie just once. While the Sabres captain has scored three goals, two have gone into empty nets.

The veteran winger started slowly after getting injured at the end of training camp. He has also left the lineup twice because of injuries, missing seven total games.

“Just trying to forge on and do whatever the team needs me to do,” Okposo said following Thursday’s practice at LECOM Harborcenter, the Sabres’ last before beginning their Christmas break.

These days, the Sabres, whose road game tonight against the Columbus Blue Jackets was postponed because of severe winter weather, don’t cast Okposo in much of a scoring role.

He usually plays on the third or fourth line, spots he produced offense from last season. The development of young forwards Dylan Cozens, JJ Peterka and Jack Quinn has recently knocked him off the power play.

“Last year, I got a boost individually from the power play,” said Okposo, who scored eight times on the man advantage last season. “But our power play’s rolling this year, and so more power to those guys and I’m super happy for them how they’re doing.”

Still, at 34, Okposo, the Sabres’ oldest forward, has remained a reliable presence whose leadership qualities and habits set a strong example for his younger teammates.

“He will eventually score more for us, but his work habits … everything that he does is geared toward performance and high-end performance, in the off-season and in-season,” Sabres coach Don Granato said. “So that’s what keeps him going. That’s what makes him a great leader and keeps him effective. He finds ways also, even if he’s not scoring, to be effective. Whether is just chipping pucks out or defending better or leading by example, which he does all the time.”

Overall, Okposo has registered 13 points this season, including one goal and two points in the last two games. He scored his first goal past a goalie, a power-play tally, on Dec. 9. After finishing with a healthy 12.1 shooting percentage last season, it has dipped to 5.9 percent this year.

“I’m just trying to play a smart game,” said Okposo, who has averaged 14 minutes, 58 seconds of ice time each outing this season. “When we have guys producing the way we do – we lead the league in goals – so when you have that production, your job becomes a little bit easier where you’re managing the game and trying to make sure you’re doing absolutely everything right and you’re not cheating the game. (I want) to set the example and to help the team create that identity. …

“(I) would like to produce a little bit more, but I think that especially over the last few games our line has been really solid.”

That line – Okposo plays right wing beside center Peyton Krebs and Zemgus Girgensons – has established itself as perhaps the Sabres’ third trio, showcasing a hard-nosed checking style. In one recent game, it drew three penalties.