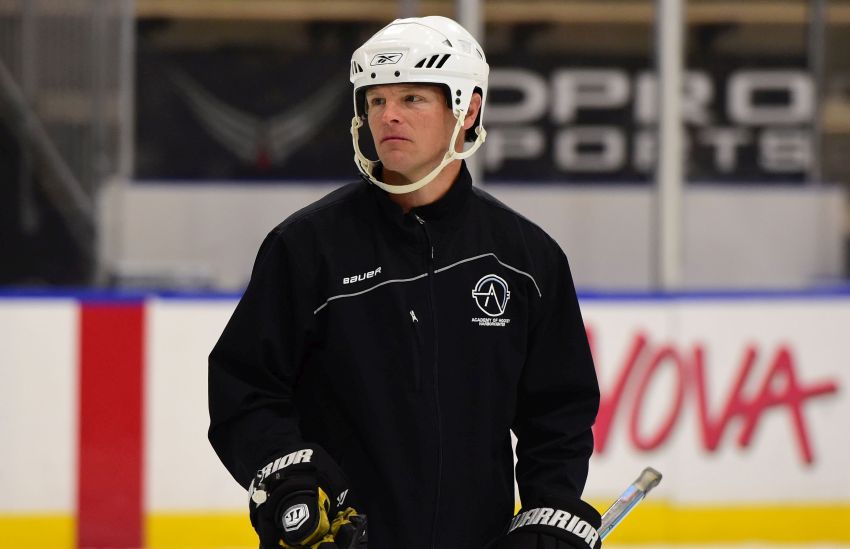 Kevyn Adams passed on other opportunities to run the Jr. Sabres. ©2018, Hickling Images

BUFFALO – When the Sabres dismissed Kevyn Adams in 2013 following a short run as an assistant coach, he said he kept asking himself the same question.

“How do I make the biggest difference over this next chapter of my career?” Adams would say.

Not surprisingly, Adams had options to stay in hockey. Adams, whose playing days ended in 2008, earned loads of respect carving out an 11-year NHL career, mostly as a fourth-liner with the Carolina Hurricanes.

One NHL team wanted to hire Adams for its front office, an offer he said he nearly accepted. But Adams, who won the Stanley Cup in 2006, also had an intriguing offer from Sabres owners Terry and Kim Pegula.

“What I kept coming back to was the opportunity that the Pegulas were presenting me was an amazing opportunity to make the biggest difference,” Adams said.

That opportunity was as a vice president and the director of the Academy of Hockey at HarborCenter, a new program the Pegulas were assembling for the state-of-the-art facility they would open in 2014. As part of those duties, Adams would run the Buffalo Jr. Sabres organization.

“I felt that we could do something really special that we could be proud of,” the Clarence native said. “I would be challenged, all the experiences that I had over the course of my life I’d be able to pass on to the next generation, and I’d also be staying involved.”

So the affable Adams passed on the NHL for what he called “a big unknown” of running the Jr. Sabres, an organization former Sabres defenseman Larry Playfair helped revitalize years earlier.

“Our goal being how do we put players in a position to develop to come out of Buffalo (as) elite-level players?” Adams said.

When Adams took over the program, the Jr. Sabres had three teams.

In the past two years, 11 players from the Jr. Sabres have committed to Division-1 hockey programs, according to the organization. Another eight plan to attend Division-3 schools. Also in that span, the United States Hockey League drafted seven players. The Ontario Hockey League, meanwhile, selected eight.

“We’re all about moving kids up to higher levels that they can go,” Adams said. “So to see kids get drafted in the USHL and be committed to colleges and all these things, it’s why we do what we do. It’s why Terry and Kim are so special, because they get the big picture. They realize how amazing and how life changing it can be for kids to have that opportunity.”

In April, the 15-and-under squad, a team coached by Buffalo native Jake Brozyna, won the national championship. Since those players started off as 11 and 12 year olds when Adams took over the organization, the title holds special meaning.

“So this was a group of kids that kind of grew up with us, and then we felt like we could really impact them, and then to see them go out on the ice and win a championship, it was amazing,” Adams said.

Adams, who finished his MBA before taking over, has put his imprint on the program. He and his staff installed what he called a “holistic” model – the whole comes from its interconnected parts – to development.

Every team has three on-ice sessions – one focused on skills and two practices – a week. Teams also have two off-ice workouts and one mandatory video session. All games are filmed and coded by a video coach, just like an NHL team.

“Even at 9 years old, we get the kids in the theater,” Adams said. “I’m a big believer that you can learn a lot of different ways.”

But Adams doesn’t simply give jobs to ex-NHL players.

“It’s more than just I played and think I know something about hockey,” he said.

He added: “Are they able to relate to what a youth hockey player’s going through, then 10 minutes later be able to have a conversation with a parent?”

Brozyna’s ability to do that impressed Adams, so he hired him. While Brozyna has no pro playing experience and isn’t a household name, he’s a junior coaching veteran.

“He really holds the kids accountable, yet at the heart of what he does is he teaches and he understands the game, and that’s not easy to do,” Adams said.

In 2011, former Sabres coach Lindy Ruff thought so highly of Adams he fired Brian McCutcheon, his longtime associate coach, to hire him as an assistant.

Back then, before his career took an unexpected turn, it looked like Adams would be an NHL coach a long time. Still, while Adams is fulfilling his passion, he hasn’t ruled out returning to the NHL someday.

“The balance of my family was extremely important to me, watching my kids grow up and being present day-to-day was a really important factor in all of this,” he said. “You know what? We’ll see what happens down the road. Once my kids are older, we’ll see what the next chapter is.”

One thought on “Jr. Sabres growing under Kevyn Adams’ watch at HarborCenter”