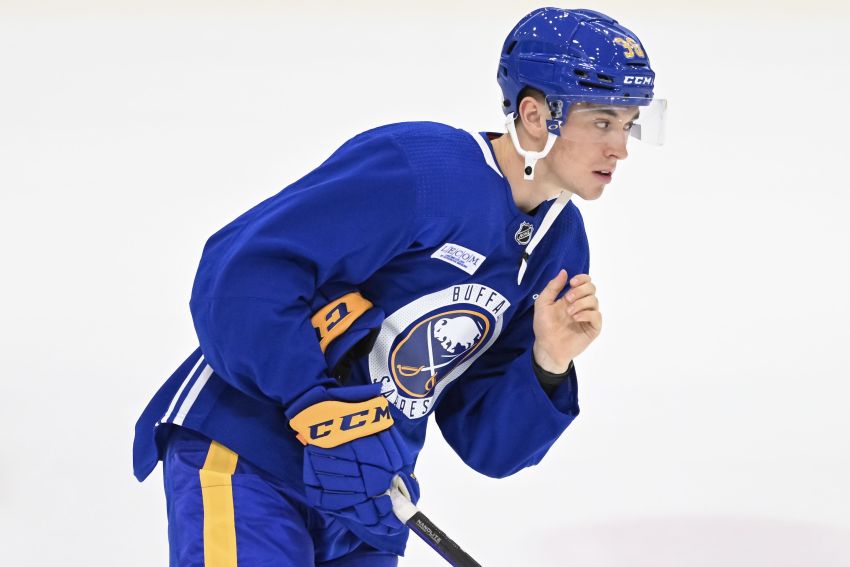 The night before Djurgardens’ recent exhibition game, Sabres prospect Noah Ostlund and his teammate, Jonathan Lekkerimaki, bet each other who would score the first “Michigan,” a lacrosse-style goal, this season.

The goal made famous by the Wolverines’ Mike Legg in the 1996 NCAA Tournament involves skill, timing and some luck. A player must lift the puck off the ice behind the net and quickly whip it over an unsuspecting goalie’s shoulder.

“(Ostlund) went out and did it like nothing,” Djurgardens general manager K-G Stoppel told the Times Herald.

That’s right, five minutes into Djurgardens’ contest against Tingsryd last week, Ostlund raised the puck behind the net and deposited it in the top of the cage.

“Right now, he plays with such a confidence, and I think it’s been good,” said Stoppel, who wasn’t sure what Ostlund collected for winning the bet. “He’s been focused for this start of the season.”

In his first days as a regular with Djurgardens, Ostlund, the 16th overall pick by Buffalo on July 7, has already assembled a sizzle of reel highlights while skating on the top line. The regular season doesn’t start until Sept. 23.

Ostlund, 18, scored three times in the preseason opener, a hat trick Stoppel said the Swede made look “so easy.”

“The way he acted on the ice, he never put himself in difficult situations, and that’s pretty abnormal with young players, because they think they can play the way they do against guys who are in same age (group) they played against growing up,” he said. “But he’s so smart (he can) find and handle each situation on the ice. So he never gets lack of time.”

“He makes the players around him better,” said Buffalo native Barry Smith, a former NHL assistant who coached Djurgardens part of last season. “He was able to come up and play at the SHL. He couldn’t play all season, 40-some games, because it’s too much physically. But he can come up and play and he wasn’t out of place.”

So far, Djurgardens has eased the 5-foot-10, 164-pound Ostlund into pro hockey. Instead of skating him at center, he has been playing right wing, a spot Stoppel said the team plans to keep him at.

“He’s skilled, but right now, he’s not that strong – hockey strong,” Stoppel said. “So we want to focus on his skills.”

He added: “He’s a really smart hockey player with good hockey sense, and has also the skills, (a) really good shot.”

Ostlund also has a notable mentor in NHL veteran Marcus Kruger, who won two Stanley Cups with the Chicago Blackhawks. Kruger, who came up in the Djurgardens organization, returned this season and plays on a line with him.

“Marcus Kruger is an incredible leader for the team,” Stoppel said. “He’s working (the) hardest of everybody. He’s first in locker room in the morning, he’s the last one leaving the locker room. He also sends the right note to every player on the team (to) follow me.”

Stoppel said Ostlund’s ability to stay in the moment has also buoyed his development. Ostlund, who signed his entry-level contract with the Sabres in July, isn’t thinking about the NHL.

“He’s here and now working with his progress,” Stoppel said. “Many talented players, they are a little bit too far away in the progress in what will happen instead of what will happen now. He’s really good to work (with) from day to day, this is my focus to be a better hockey player.”

When Ostlund visited Buffalo in July for development camp, he said he hopes to come play in North America in a year or two.

The Sabres on Monday hired Matt Smith as a video coordinator. Video coach Myles Fee left earlier in the offseason to take a position with the Florida Panthers.

Watch out Zegras, Noah Ostlund just made the Michigan and international sensation! pic.twitter.com/SheUnd9u84