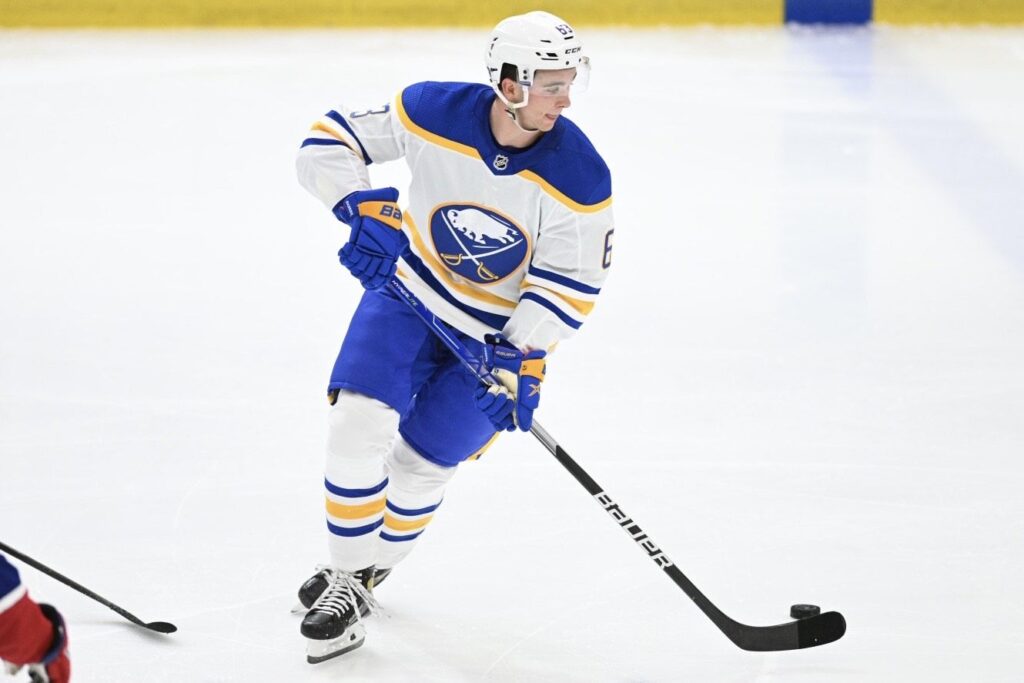 “He looks faster. He looks harder on the puck,” Rochester Americans coach Seth Appert said of Rosen’s rapid improvement since development camp ended in mid-July. “And his first step looks like it’s got either more pop or more assertiveness. So some of it’s physical.”

Rosen said prior to recording an assist in Thursday’s Prospects Challenge opener he has “become more self-confident” this summer.

“Part of why you train so hard is also what it does to you mentally,” Appert said before the Sabres defeated the Montreal Canadiens 4-3 at LECOM Harborcenter. “You know you’ve put the work in and you know you’re ready. … He looks like he knows that he had a great summer and he’s ready to attack.”

Having spent last season playing at home in Sweden – and with other talented young forwards in the organization – Rosen, 19, often gets overshadowed. But the Sabres are excited for the arrival of the slick winger they drafted 14th overall in 2021.

“When I came into World Juniors, I hadn’t played for like four months or something,” said Rosen, who assisted on center Tyson Kozak’s first goal Thursday. “I was pumped up to play again and playing with confidence.”

Rosen spent most of last year in the Swedish Hockey League, compiling two goals and four points in 28 outings with Leksands IF before suffering a season-ending hand injury.

“His speed is very impressive,” Appert said. “He … was clocked as like the second-fastest player at top speed in the whole World Junior tournament. He has explosive acceleration. He does it very effortlessly. So his skating is special.

“He has very good creativity with his vision. But he is a bit of a goal scorer, which is great to see for a young player.”

Rosen’s also willing to pay a price defensively. In the waning seconds Thursday, he blocked a shot to help the Sabres eke out a victory.

“What a blocked shot,” Appert said. “That’s winning hockey, right? That’s a first-round pick, that’s a skill player, that’s an offensive-minded player that did a lot of good things tonight. And yet he’s going out there with 15 seconds to go and he’s going to eat a puck to win a hockey game. I thought that was a great sign for what he stands for as a player.”

Right now, Rosen’s likely ticketed for Rochester. The transition to North American hockey and the AHL, of course, can be daunting and difficult.

There’s the smaller ice surface and a different style of play. He also needs to add some muscle.

Still, Rosen doesn’t have to look far to see a prime example of how quickly a European can acclimate. As a rookie last season, Sabres prospect JJ Peterka morphed into one of the AHL’s top scoring threats, recording 28 goals and 68 points in 70 games and seven goals and 12 points in 12 postseason contests.

Peterka scored 24 of his regular-season goals after earning his first recall to Buffalo in late December.

Rosen said Appert has told him about Peterka’s development.

While it might take a little time, Appert’s confident Rosen and the other European rookies the Sabres will have in Rochester this season – forwards Aleksandr Kisakov and Jiri Kulich will likely join the Amerks – will adapt and thrive.

“Isak, (Kisakov), (Kulich), they’re going to go through struggles,” Appert said. “The American League is tremendously challenging. … And there’s going to be failure with that, but we need to help them grow through that failure.”

He added: “They have the skill and they have the mind to be great pro hockey players. And it’s just going to take the adjustment of the physicality and the competitiveness on the puck. They’ll adjust to that.”

Kozak scored twice after the Sabres roared back from a 2-0 deficit. His short-handed goal 14:13 into the third period held up as the winner.

Josh Passolt and Nolan Burke scored the Sabres’ other goals.

Appert said a lower-body injury will force Kulich, the 28th pick on July 7, to miss the Prospects Challenge.

“He had an injury coming in that was nagging him a little bit,” he said. “So the medical team just wants to shut him down for this tournament.”

Bloom left the game in the second period after suffering what looked like an arm or shoulder injury. Appert said he’s day to day with an upper-body injury.

The 6-foot-3 and 238-pound Slafkovsky, the first selection this year, was the most noticeable player all night.

Savoie, the ninth pick in July, Kisakov and Linus Weissbach and also played on the power play and killed penalties. After Bloom left, Appert double-shifted Savoie at right wing with Cederqvist and Olischefski.

“He made a lot of plays tonight that could’ve ended up in the net,” Appert said. “But Savoie on a night that isn’t all over the scoreboard still helps you win hockey games because he does all the other things – he competes, he’s fast, he forechecks.”