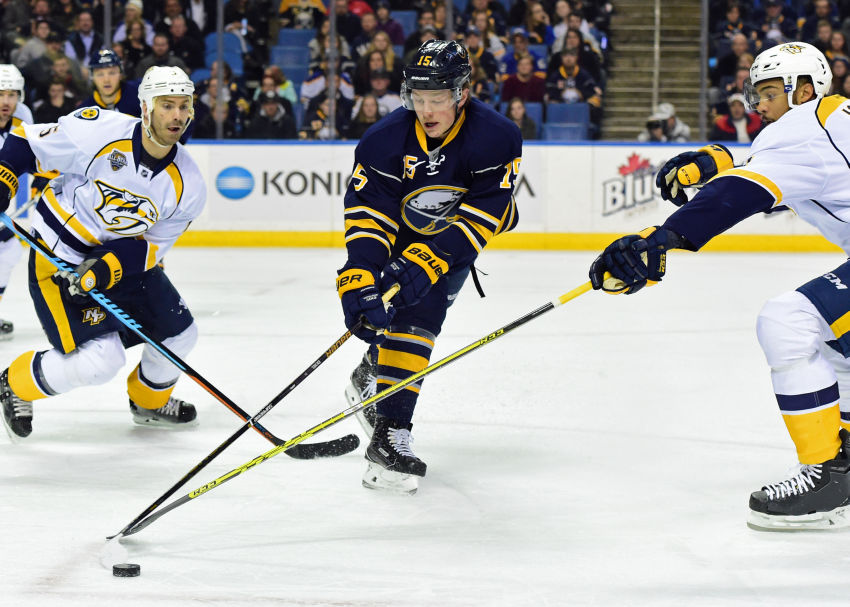 BUFFALO – They’re different this year. Unlike the last two seasons, the Sabres rarely get pummeled in their losses. They stay in contests and often outplay their opponents. That’s why the six-game losing streak they carry into tonight’s home tilt against the Carolina Hurricanes feels a bit odd.

Sure, the Sabres have only led for eight minutes, 22 seconds during the skid. That happens when you’ve scored just seven times.

But they’ve been in every game during their 0-4-2 run. They have four one-goal losses. If the power play, which is just one of the last 18, could’ve converted a couple of critical five-on-threes, they might have a win or two.

“You can look at the positives,” winger Evander Kane said Wednesday following the Sabres’ 3-2 loss to Nashville inside the First Niagara Center. “We’ve definitely competed with those teams, outplayed them at times. That only takes you so far. You got to win. This is a results league.”

On Wednesday, they had an 11-4 shot advantage after one period and a 25-11 advantage after two. But a breakdown almost 14 minutes into the game, the Predators’ first flurry of shots, cost them.

“It’s frustrating because I think for the most part we’ve given ourselves a chance,” Sabres defenseman Josh Gorges said. “But at the end of the day, it doesn’t matter. We’re in the business of winning and losing, and all that matters is winning. And whatever position we’re in, we got to find ways. We got to find ways to get that extra goal, to keep that extra goal out of the net – whatever it may be.”

The Sabres can’t score those extra goals. They have only 45 all season. Their shooting percentage during this losing streak is 4.19 and 6.8 overall.

Almost across the board, every forward is enduring an awful offensive season. Captain Brian Gionta, Marcus Foligno and David Legwand all have one goal. Johan Larsson has zero.

Larsson, who ended last season as the No. 1 center, got benched Wednesday, skating just one shift in the third period and a game-low six minutes, 37 seconds overall.

Notes: Bylsma said winger Tyler Ennis missed Wednesday’s game with an upper-body injury and needs further evaluation. He has no timetable for a return. … Eichel has scored six of his seven goals at home. … Hurricanes winger Nathan Gerbe, a former Sabres regular, is out four to six weeks with a lower body injury. … The Sabres had Thursday off.