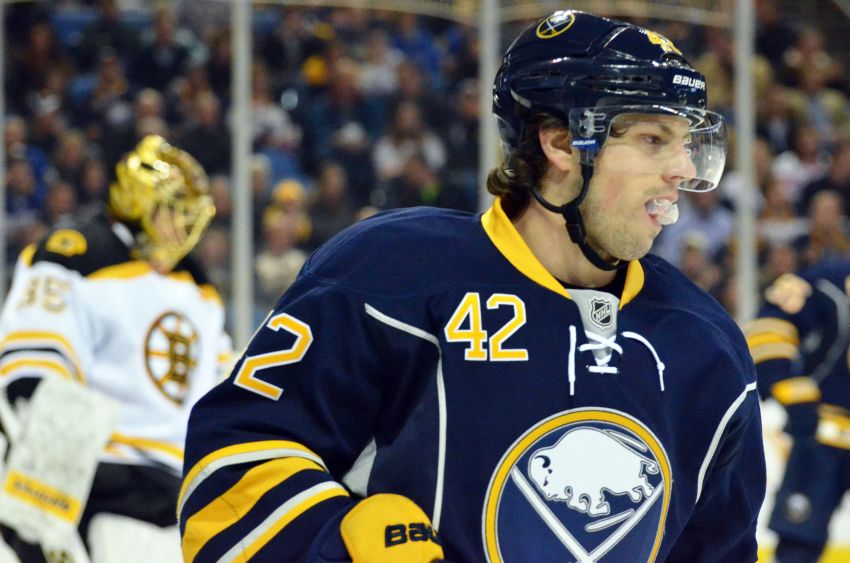 The team placed the diminutive winger on waivers Wednesday for the purpose of buying him out, his agent, Jordan Neumann, told the Times Herald.

When asked if Gerbe had any warning, Neumann replied, “Absolutely none.” The Sabres still hadn’t contacted Neumann as of early Wednesday afternoon. Neumann said he understands the business, however.

Sabres general manager Darcy Regier told the media at least three times recently, including Sunday and Tuesday, he had no plans for any buyouts.

The NHL salary cap is going down to $64.3 million in 2013-14, so teams have the option of two compliance buyouts. If they aren’t used by 5 p.m. today, teams must wait until June.

Gerbe was scheduled to make $1.85 million next season. His $1.45 million cap hit will be wiped away. The Sabres would owe Gerbe $308,333 each of the next two seasons, according to capgeek.com.

Neumann’s confident Gerbe will land on his feet.

“I think he’s a player with elite skill,” he said.

Gerbe, a prolific NCAA and AHL scorer, has never recaptured that slick offensive ability in the NHL, though, only accumulating 29 goals and 72 points in 188 games.

The diminutive American – Gerbe’s only 5-foot-5 and 173 pounds – has instead mostly become a third- or fourth-line checker. The 25-year-old had only five goals and 10 points in 42 games last year.

He was a collegiate superstar at Boston College, scoring 35 goals and 68 points in 43 games during a legendary junior season in 2007-08. Then 30 goals and 56 points in 57 contests with Portland earned him AHL top rookie honors in 2008-09, the same season he made his NHL debut.

At times, he showcased flashes of his old form in the NHL. After going goalless his first 20 games in 2010-11, he scored 16 times in his final 44 appearances, a career-high.

But he struggled offensively the last two seasons, netting just 11 goals in 104 games.

Last season, after battling back from a scary back injury, new coach Ron Rolston benched him twice, saying, Gerbe “didn’t give us a reason to keep him right now.”

Upon his return March 23 in Montreal, Gerbe, while polite, told the Times Herald he “didn’t agree with that at all” and that he needed more “minutes to play better.”

“Anyone would want more than five minutes,” he said then.

The Sabres still have a surfeit of forwards, with about 15 on the roster. Corey Tropp, a regular late in 2011-12, is also set to return from a knee injury.

The Sabres’ three-day summer development camp runs from next Wednesday through Friday at the First Niagara Center. Approximately 40 prospects, including all the team’s recent draft picks, will participate.

Forward prospects Joel Armia and Johan Larsson have been excused from the camp because of commitments at home, amateur scouting director Kevin Devine said Tuesday.

Update: According to the Buffalo News and capgeek.com, the Sabres will be buying out Gerbe’s contract regularly, not through compliance. The Sabres have a cap figure of $49,907,857. Gerbe still counts against the cap.