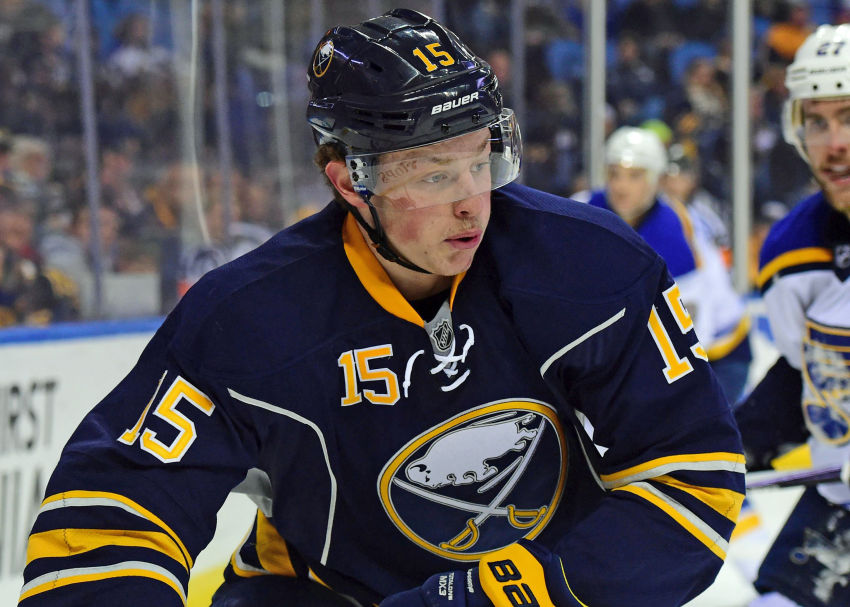 Still, despite all the flash the rookie has consistently showcased, “He’s not finding the back of the net,” Sabres coach Dan Bylsma said.

Eichel, who has six goals and 10 points in his first 21 NHL appearances, might be enduring the worst slump of his entire career entering tonight’s tilt against the Nashville Predators inside the First Niagara Center. The second overall pick hasn’t scored a goal in six games and has just one assist in that span.

For almost anyone else, that’s not much of a slump, especially in this low-scoring era. But even two months into his career, Eichel, 19, is held to a higher standard than most NHL players.

Naturally, Eichel’s “not happy with where my game’s at right now,” he said. On Tuesday, he told the Times Herald, “I don’t know what it is.” He wondered if he was overthinking or simply not working hard enough.

Earlier in the season, Eichel said, he was pumping more shots on net and “creating a lot more.” He hasn’t scored since Nov. 10 in Tampa Bay, a 4-1 win against the Lightning he believes was his best NHL outing.

“I was happier earlier in the year where my game was,” said Eichel, who has registered 15 of his 71 shots in the last six games. “I didn’t really have the points to show for it. I don’t think that was really a good measurement of how I played.”

The Sabres’ struggles – they’ve scored only five times during their five-game losing streak (0-3-2) – have magnified Eichel’s own problems.

“For him, everybody goes through these little bumps in the roads, and unfortunately, it’s happening at the same time as our team struggles right now,” Sabres defenseman Carlo Colaiacovo said.

Bylsma added: “I think (Eichel) feels like he needs to carry the load.”

Of course, Eichel isn’t used to slumping. Many young stars don’t face their first real bit of adversity until they’re in the NHL. Eichel compiled 26 goals and 70 points as a freshman last season at Boston University, winning the Hobey Baker Award.

“You don’t know if you think it’s going to come easy, but it’s come easy to you in the past,” Bylsma said. “I think he’s getting good opportunities. Maybe he hasn’t got it in the same areas or there’s more pressure (with) NHL guys checking him. I think he’s finding that how and when he’s going to score a goal.”

Eichel’s still acclimating to the NHL’s long and often grueling schedule. He played only 40 games last season, a number he could hit by early January if he stays healthy. The Sabres have four games this week.

“It’s a little different playing more,” Eichel said. “You’re on the ice more often, longer. That’s probably the biggest adjustment for me right now, is trying to keep my body energized and be ready to go every time I go on the ice.”

Eichel must also play a tougher brand of hockey every shift. Play away from the puck usually dictates offensive success in the modern NHL.

“That’s got to be better, too,” Eichel said. “It all translates. Play in the faceoff dot translates to us getting the puck and how I play away from the puck translates to when I have it. So there’s a lot of things I need to work on and get better at. I just don’t want to try to put too much pressure on myself now. I’m definitely enjoying this experience. But at the end of the day, you want to see results for yourself and your team.

Tonight’s contest could be a real snoozefest. Incredibly, the Predators have been blanked three straight games and haven’t scored a goal in a franchise-record 213 minutes, 47 seconds. No team has been shut out in four straight games since the 1967-68 Oakland Seals, according to the Nashville Tennessean.

“They went to Niagara Falls today,” Bylsma said Tuesday. “We did scoring drills. Tomorrow there might 15 goals in the game. I’m a little nervous about talking about that.”