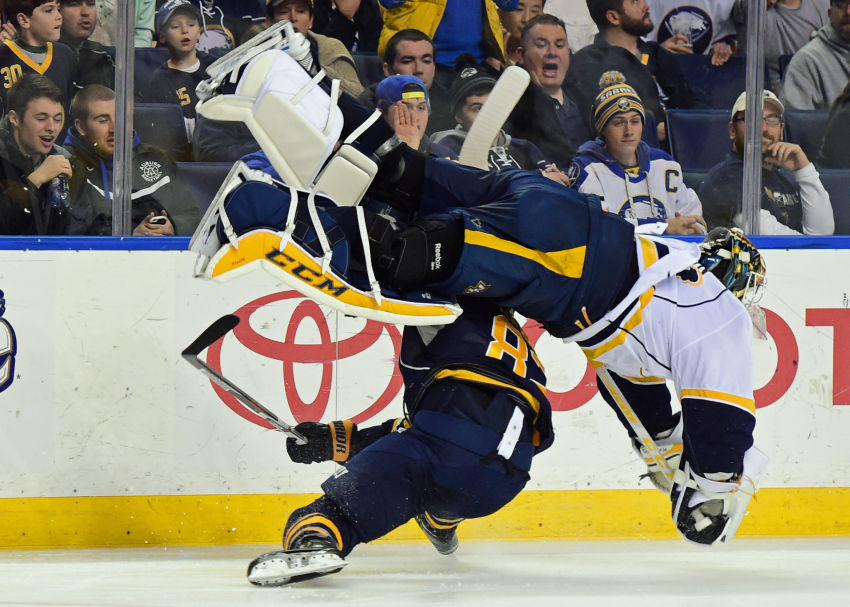 BUFFALO – On Wednesday, against a reeling team that hadn’t scored a goal in more than three games, the Sabres pounced on the Nashville Predators early.

The Sabres held an 11-4 shot advantage after one period and widened it to 25-11 after two inside the First Niagara Center.

The Sabres trailed 1-0 after 20 minutes and 3-1 after 40 in their 3-2 loss to the Predators. After winning three consecutive games to reach .500, the Sabres have dropped six straight contests (0-4-2).

What do you say to a team that’s beating up on an opponent but not being rewarded?

“We talked about keep going, keep going the way were playing,” Sabres coach Dan Bylsma said. “A lot of good things at that point. That had to be our focus.”

Seconds before Mike Fisher opened the scoring at 13:52, completing a quick three-shot flurry, the Sabres held an 8-0 shot advantage. Incredibly, it was the first goal for the Predators in 227 minutes, 39 seconds.

“Our guys are confident that we’re going to score goals,” said coach Peter Laviolette, whose Predators snapped a three-game losing streak. “We weren’t going to get shut out the rest of the year. That would be impossible, right? Right.

Craig Smith scored in the second period before former Sabres enigma Cody Hodgson, back in town for the first time since Buffalo exercised a contract buyout in June, scored the eventual winner at 6:29.

“That’s a frustrating loss because we were prepared for tonight’s game,” Sabres defenseman Josh Gorges said. “We came ready to play. We did a lot of good things, especially in the first period. But that just goes to show you have to be ready every shift. We make some mistakes that cost us goals when we’re controlling plays.”

When the Hodgson’s goal was announced, some in the crowd of 17,871 booed him.

“I know people always want to do well in the buildings that they’re in and they came from for whatever the reason,” Laviolette said. “Cody played a good game tonight.”

The Sabres got back into it when Evander Kane scored 18:22 into the second period.

They seized some momentum 8:42 into the third when Marcus Foligno dove as he and Predators goalie Carter Hutton raced for a loose puck near the right circle, flipping Hutton over and knocking his mask off.

For one of the few times Wednesday, the crowd roared.

“That’ll be replayed quite a bit,” Laviolette said. “That was a good butt-over-teakettle, to put it to print, butt-over-teakettle hit. It’s an up and over. Gutsy play by Carter coming out like that. He was really, really good tonight.”

With Johnson off for an extra attacker, rookie Jack Eichel made it 3-2 at 18:41, his first goal in seven games.