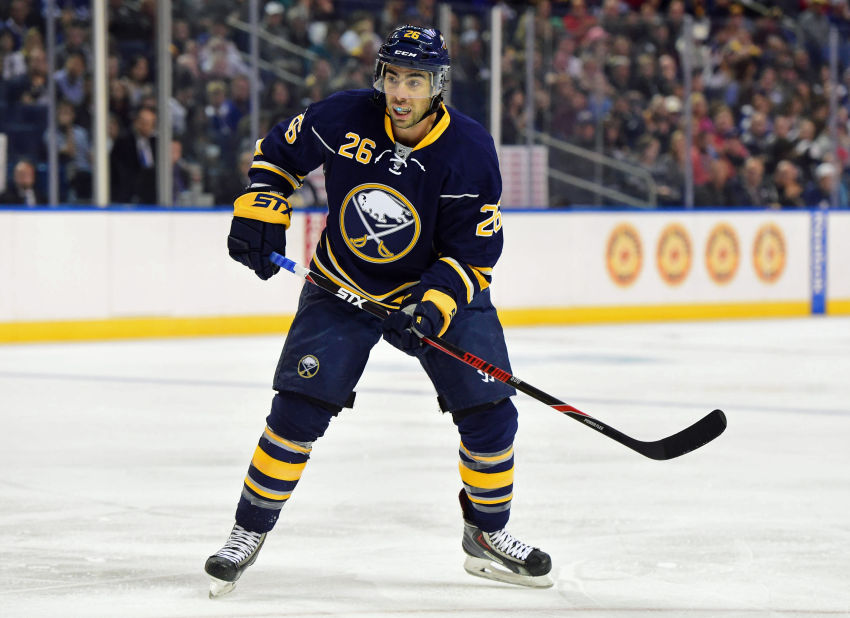 BUFFALO – After his family, the most important thing in his life, Sabres winger Matt Moulson has two other loves.

“Scoring is my second love after winning,” Moulson said Sunday inside the First Niagara Center.

Moulson, 31, did little of either throughout a brutal 2014-15 season in which the Sabres won only 23 times and he scored a career-low 13 goals.

He struggled from the get-go beside some pedestrian centers, only occasionally showcasing the talents that once helped him score 30 goals three straight years. He scored his first goal 15 games into the season. His 16-game goal drought early in the winter coincided with the Sabres’ 14-game losing streak.

“It’s tough when you’re not doing that,” Moulson said about scoring goals. “I think you put a lot of internal pressure on yourself. All guys do that that score goals. I think you take it personally when you’re not getting those.”

Moulson accepts responsibility for his struggles. Despite some overwhelming evidence, Moulson, who played four seasons beside New York Islanders superstar John Tavares, has never believed the common theory he needs an elite center to score goals.

“We can’t use that excuse anymore,” Moulson said.

Nope. Moulson no longer has to play with likes of Torrey Mitchell or Phil Varone. The Sabres now have two playmaking centers, rookie Jack Eichel and Ryan O’Reilly, ready to feed him the puck regularly.

“I think there’s so many skilled players on this team maybe it takes the pressure off individuals,” Moulson said.

Moulson played beside Eichel, who’s living with his family this season, early in the preseason. He recently moved to the left wing beside O’Reilly and Tyler Ennis, a spot he could occupy for Thursday’s season opener.

“The guys that I’ve played with this preseason, if you can’t get open for them to get goals, you’re not playing right,” he said.

Sabres coach Dan Bylsma believes Moulson can regain his goal-scoring prowess beside anyone.

“If his old case is 25 goals around the net and on the power play, then there’s no question,” Bylsma said. “I don’t necessarily think it needs to be one of those two guys feeding him. He can do that by going there himself.”

Moulson averaged 32 goals and 57 points beside Tavares over three full seasons. He scored 15 goals and 44 points in 47 games three years ago and had six goals and nine points in 11 contests in 2013-14 before the Isles dealt him.

Counting a 20-game run in Minnesota, Moulson has only 30 goals in 141 appearances since he left the Isles.

The adroit passing of Eichel, one of the biggest prospects in recent memory, and O’Reilly, one the NHL’s top all-around centers, should certainly help.

“I think he’s really good in front of the net,” O’Reilly said. “I think for me and Enzo there, it gives us the puck a little bit more. We kind of know where he’s going to be.”

Moulson connected on Eichel’s pass in front in the preseason opener, the kind of play Bylsma envisioned when he put them together.

“He wants to give me the puck and get in the position,” Eichel said.

Moulson, of course, knew what he was getting into when he signed a five-year, $25 million contract to rejoin the Sabres on July 1, 2014 following a brief stint with the Wild. He understood there would be some lumps. But he bought into Sabres owners Terry and Kim Pegula’s vision of the future.

“Their vision they had even before this past summer was something I believed in,” Moulson said.

He added: “We have a lot of work to do, but we’re heading in the right direction.”

That direction has refreshed Moulson.

“The excitement about getting this year started and the guys we’ve added is something that gets you up,” Moulson said. “A lot on this team are really easy to play with, very smart and skilled guys.”

Eichel, 18, might be the smartest and most skilled. Having him in the house is “basically like having our eldest son,” Moulson said.

“He’s a good kid,” he said. “I think being around him, he’s got a lot of energy, a lot of spunk to him. When he’s at the house and he gets bored, he’ll get up and play with the kids. He’s been a lot of fun to have around.”