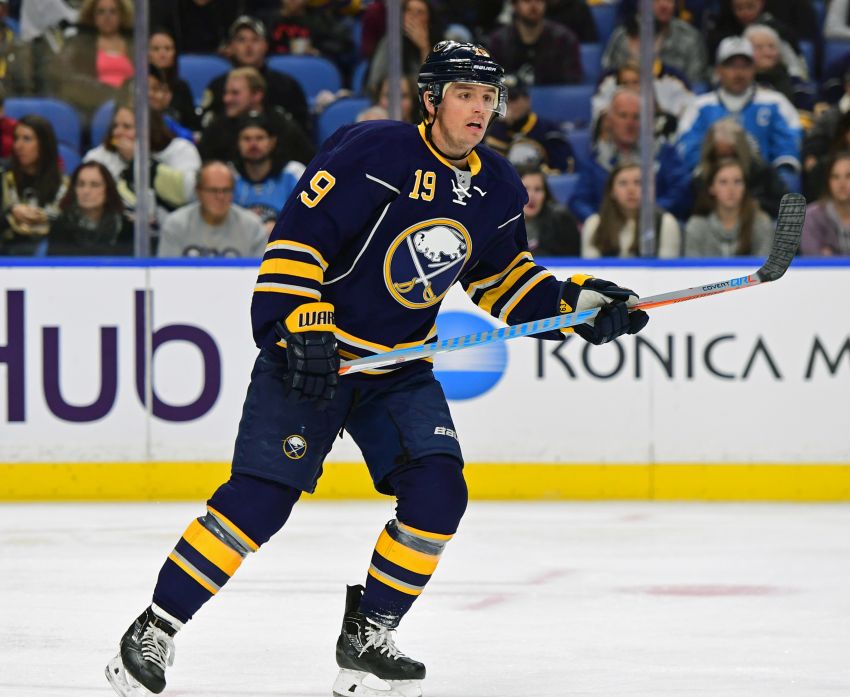 But O’Reilly, the AHL’s leading scorer, has morphed into a valuable asset for the organization, captaining the Rochester Americans and providing depth for the Sabres.

O’Reilly, 30, proved that Saturday just hours after earning a recall, scoring the shootout winner in the Sabres’ 2-1 win against the Pittsburgh Penguins, a triumph that ended a six-game losing streak.

Why did Sabres coach Dan Bylsma pick O’Reilly to shoot in the third round?

“You want to put people in the right spots to have success,” Bylsma said. “Regardless of if Cal is a call-up or not, that was the right time for Cal.”

O’Reilly simply skated in and wristed a shot past Penguins goalie Marc-Andre Fleury, his sixth NHL shootout goal in 13 attempts.

“I come down and it seems to work pretty well,” O’Reilly said. “I went with it tonight and it worked.”

After playing 20 NHL games last season, O’Reilly has enjoyed a torrid start with the Amerks, scoring three goals and 18 points in 15 games.

“You be patient and try to control what you can control,” O’Reilly said Saturday morning inside KeyBank Center.

Just 18 games into the season, O’Reilly became the 30th player to dress for the Sabres.

The Sabres summoned O’Reilly because “we needed help in the center position,” Bylsma said.

With top centers Jack Eichel (ankle) and Ryan O’Reilly (oblique) injured, the Sabres have been woefully thin down the middle all season. Bylsma used Sam Reinhart, a winger most of the last two seasons, at center Saturday. Third-line center Johan Larsson moved up to the No. 1 spot. Fourth-line center Derek Grant has never scored an NHL goal.

“Cole continues to play well down there and (he’s) just getting another opportunity,” Bylsma said. “Kind of looking for a player to grab hold of the opportunity they’re given.”

Bylsma also used O’Reilly, who has 16 goals and 48 points in 134 NHL appearances, on the second power-play unit. O’Reilly had three goals and seven points with the Sabres last season.

“I think it’s important you put players in situations and opportunities they can help,” Bylsma said. “Cal is that guy. He’s almost a point-a-game guy (in the AHL). He has poise and confidence with the puck. … I think he can add to that second unit, being a poised puck guy, controlling the play, passing.”

“I proved to myself that I could still play here, contribute,” he said. “That’s good for anyone’s confidence after being away from the NHL for a few years.”

“He hasn’t missed many games in his career,” Cal O’Reilly said. “He hasn’t really gone through something like this. I think it’s really tough on him.”

Winger Zemgus Girgensons has struggled under Bylsma, who coached his 100th game with the Sabres on Saturday. Girgensons has only mustered one goal and four points in 18 contests this season. The four-year veteran scored seven goals and 18 points in 71 games in 2015-16.

Remember, Girgensons, 22, thrived two seasons ago under former coach Ted Nolan, scoring 15 goals and 30 points in 61 games. Thanks to big support in his native Latvia, fans voted Girgensons into the NHL All-Star Game.

“On a scoring-chance ledger, he has not gotten enough,” Bylsma said. “But he hasn’t gotten enough because he’s giving up too many on our ledger. He can’t just try to score more by going out and looking for more offense. He’s got to be able to play on both sides of the puck. He’s got to play good defensively before he’s going to think about how many scoring chances he needs to score goals.”

Guhle, 19, impressed during NHL training camp this year before the Sabres sent him back to junior. The 2015 second-round pick has two goals and four points in 15 games this season.

Notes: Sabres defenseman Dmitry Kulikov missed his fifth straight game (back). … Bylsma bumped defenseman Taylor Fedun, who made his Sabres debut Thursday, up to the top power-play unit against the Penguins.