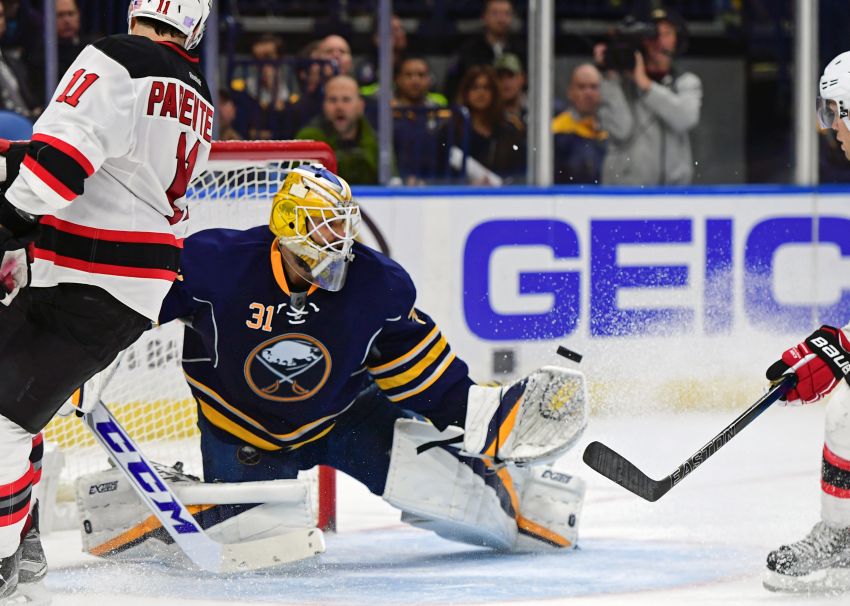 BUFFALO – Toward the end of the morning skate, backup goalie Anders Nilsson, not Robin Lehner, started skating to the Sabres bench.

Would Sabres coach Dan Bylsma really start his backup against the Pittsburgh Penguins over Lehner, his starter who has played 13 of the first 17 games?

After fiddling with his sticks at the bench for a few moments – it almost seemed like Nilsson was teasing everyone trying to see if he would leave first – he eventually left the ice.

Nilsson will start tonight against the defending Stanley Cup champions at KeyBank Center.

“In the scheduling of the games, he was going to play one of the next four,” said Bylsma, who coached the Penguins from 2009 to 2014.

The 6-foot-6 Nilsson has looked impressive in four outings, going 1-1-2 with a 1.96 goals-against average, .942 save percentage and one shutout. The Swede last played Nov. 11, stopping 41 shots in a 2-1 shootout loss to New Jersey.

The Penguins, a squad filled with lethal talent, will provide a stiff test for the injury-plagued Sabres.

“It’s still the same game and still the same puck you have to stop, so it’s not too big of a difference,” Nilsson said this morning. “Obviously, they have some very skilled guys and some guys you have to be aware of when they’re on the ice.”

The 11-4-2 Penguins have a lot of skill guys. Superstar Sidney Crosby already has 11 goals and 15 points in 11 games. Phil Kessel and Evgeni Malkin also have 15 points.

Why did O’Reilly receive his first recall this season?

O’Reilly said: “You be patient and try to control what you can control.”

To try to combat Crosby and Malkin, Bylsma has moved center Johan Larsson up to the No. 1 between Evander Kane and Kyle Okposo. Larsson will be charged with shadowing the stars all night.

“Really more of a matchup situation with the opponent than a lot else,” Bylsma said. “They think he’ll be able to do that for that line, be able to play against of the top two lines tonight, against Crosby and Malkin.”

The rest of the Sabres lines:

Cal O’Reilly, who had three goals and seven points in 20 NHL games last season, will also play on the second power-play unit.

“I think he can add to that second unit, being a poised puck guy, controlling the play, passing,” Bylsma said.

Bylsma also shifted defenseman Taylor Fedun from the second unit to the first for Jake McCabe.

Why did Fedun earn a promotion after just one game?

“Just the poise and the puck play and the puck distribution at the top, and coming up the ice from Taylor,” Bylsma said. “Moves (Rasmus) Ristolainen into a one-time position, a shooting position, pretty much solely. We want that to be the focus from Risto.”

– The Penguins won 3-2 in overtime Friday against the New York Islanders.