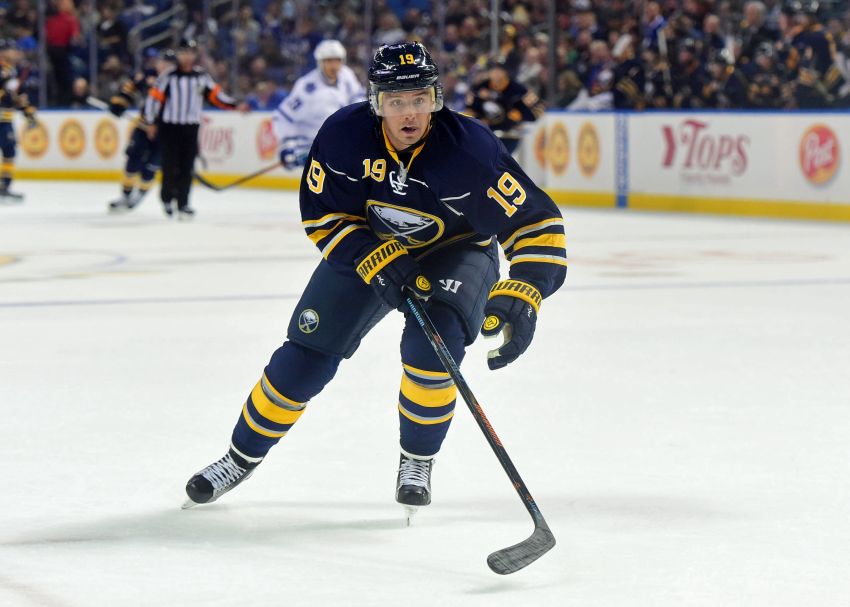 BUFFALO – Given Ryan O’Reilly’s wide smile and enthusiastic voice talking about his older brother Cal’s exploits in the Sabres’ 4-1 win against the Toronto Maple Leafs, it almost looked and sounded like he had just enjoyed the game of his life Thursday.

But Ryan O’Reilly was just excited to be a part of the first two-goal outing of Cal’s 141-game NHL career.

That Ryan earned the secondary assist on Cal’s first goal – it was the first time they ever connected on the same score – and they could share the night with their father, Brian, and mother, Bonnie, who were in the crowd watching with family and friends, made everything extra special.

“That was our first together,” Cal said. “It was pretty special for our family. Our parents are here, so I’m sure they were cheering pretty loud and proud of us.”

Sabres coach Dan Bylsma said: “It was mentioned during the game, mom’s going to be happy with that one.”

Following Johan Larsson’s goal, Cal, 29, scored from the slot on the power play 7:09 into the contest, connecting on Jack Eichel’s pass. Ryan, 25, fed Eichel the puck.

In the second period, Cal zipped the puck past Leafs goalie Garret Sparks from the left circle. The goal almost looked like a throwback score from a past era.

“I just hit it perfectly there,” Cal said about his 16th NHL goal. “It wasn’t spinning.”

Someday, some of those moments from Thursday’s game will probably be hanging in the O’Reilly’s home in Ontario.

“It was kind of cool,” Ryan said. “I’m sure my mom will be searching for pictures and hand them out to all the family.”

The Sabres wanted Cal to score a third goal, so Bylsma put him out when Sparks was pulled for an extra attacker before the crowd of 18,873 fans inside the First Niagara Center.

“Was trying to get him the hat trick,” Bylsma said. “Lots of people go in the game without getting a hat trick. … Cal is a guy who’s played a lot of games in the National Hockey League and his stats (47 points) are pretty darn good.”

Growing up playing on the backyard rink together “beating each other up,” Ryan figured he would never get a chance to play with his older brother at hockey’s highest level.

Over six seasons, as Ryan developed into one of the NHL’s best all-around forwards and Cal fell out of the league, it looked like that opportunity would never materialize.

But days after the Sabres acquired Ryan in June, Cal signed a two-year deal here worth $1.4 million, a massive sum for a player who hadn’t appeared in the NHL since 2011-12.

Cal, someone Ryan has called his “idol,” went up and down from the Rochester Americans for months. He’s been in the NHL for the last month, however. Thursday was his 18th game.

“It’s been special with them giving me a chance to play up here with him, it’s pretty special for us,” Cal said. “We got a lot of friends and family coming most nights.”

Cal has acknowledged that after his brief run in Pittsburgh four years ago and some injuries, he knew his big league career could be over.

“There was a time there I thought I might not get an opportunity again,” he said. “I’m very fortunate the Sabres here gave me a chance. … It means a lot. You just never know. Your career flies by, and before you know it, you’re retiring, so it’s pretty special you’re playing some games here.”

Ryan added: “I watch him train. I see everything he does. It’s nice to see him get rewarded.”

To Ryan, he gets rewarded from his “phenomenal” offensive and playmaking ability.

“So to see him have success tonight, especially with the family in town, it’s an honor,” Ryan said.

Larsson added an empty-netter for his first two-goal NHL game.

“It’s something I certainly would have taken at the beginning of this year, Chad Johnson getting 20 for you and I am happy for him,” Bylsma said. “It’s a significant marker for him in his career.”

The Sabres have won seven straight games here against the Leafs.