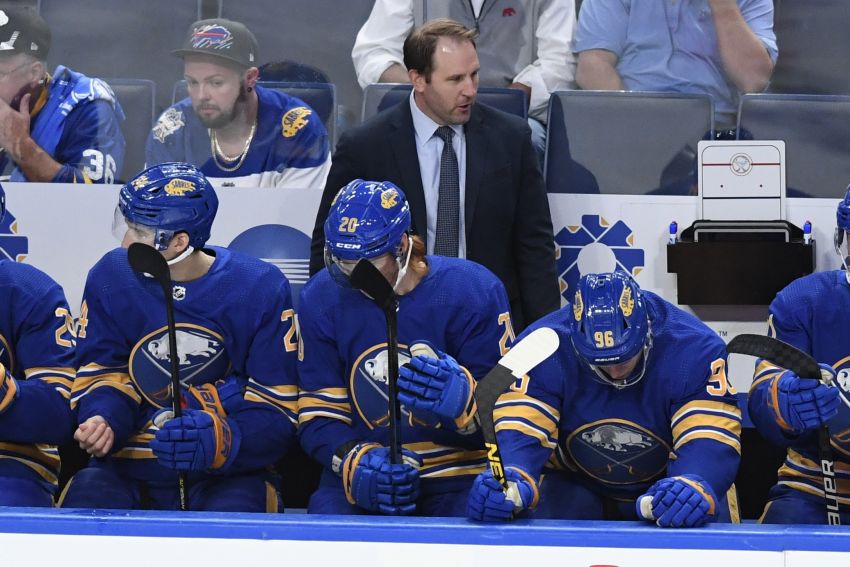 Matt Ellis is in his first full season as an assistant coach. ©2021, Micheline Veluvolu

BUFFALO – Following the Sabres’ first practice in eight days, winger Kyle Okposo acknowledged that, yes, at times he recently wondered if they would ever skate together again.

On Sunday, Okposo arrived at the KeyBank Center excited the NHL’s Christmas/COVID-19 break had ended. But after coach Don Granato and forwards Dylan Cozens and Mark Jankowski tested positive for the virus, the Sabres canceled their scheduled afternoon practice.

“I was ready to go yesterday,” Okposo said following Monday’s session. “I was excited. To get a text to go home essentially was tough, but, yeah, it does enter the back of your mind that you just don’t have any control over the situation.”

COVID-19 has kept ravaging the NHL post-Christmas. Nearly 150 players are in protocol, a shocking number.

The Sabres have one coach and five players sidelined. When no one entered protocol Monday, they felt a huge sigh of relief. They could practice for the first time since last Sunday.

“Today it was just nice to be around the guys again and get together, talk about what we did for the holidays, world juniors, and what’s going on,” Okposo said. “Get back to a normal day. That was definitely nice, and I feel for the guys who can’t be here.”

If Granato remains asymptomatic, he could potentially coach Wednesday.

“There is still potential to test back in by Wednesday,” said Adams, who said he spoke to Granato on the phone five or six times Monday morning. “The way the protocols work, if you have two negative PCR lab-based tests and you’re asymptomatic, the doctor can bring you back in. So that’s still on the table.”

The Sabres, of course, need reinforcements to field a lineup, especially up front. Adams hopes some players in protocol can test back in. Others will likely be recalled.

The Rochester Americans, however, have their own problems, so the Sabres’ options are limited.

The Sabres might also stock the taxi squad, which the NHL has brought back to help teams get through their COVID problems.

Adams said he planned to have a meeting about the roster later Monday.

Amerks winger Jack Quinn, having scored 11 goals and 24 points in 17 games, would likely earn his first recall if he wasn’t recovering from mono. Quinn, arguably the Sabres’ best forward prospect, has been sidelined two weeks.

“He was, to me, maturing in his game where he was a difference-maker almost every time he was on the ice,” Adams said. “He wanted the puck, he wanted to make a difference, and that to me is a big step in the trajectory of our younger guys, to see that game in and game out.”

Adams said Quinn, 20, is “feeling much better” and “lost a fair bit of weight” off what was a 176-pound frame. The rookie recently returned to Rochester after going home to Ontario.

“Get some home-cooked meals,” Adams said.

So who could the Sabres summon from the AHL? Forwards Peyton Krebs, Ryan MacInnis, Sean Malone, JJ Peterka and Arttu Ruotsalainen might be at the top of the list.

After adding some players, the Sabres plan to have a normal practice today and prepare for their first game since Dec. 17. Monday’s session was more about reacclimating to the ice and sweating than Xs and Os.

“Tomorrow’s practice … it’s about getting back into a little more structure, line combinations, just getting the group back acclimated to the way that we want to play,” Ellis said. “Today’s targets were pretty simple. You want to be shaking off the rust. You want guys feeling the ice, feeling their edges, making sure the hips and groins are taken care of.”

Ellis said he could sense the excitement to be back Monday when he walked through the gym before hitting the ice and music was blaring. When players broke a huddle at the white board at the beginning of practice, they banged their sticks and hollered.