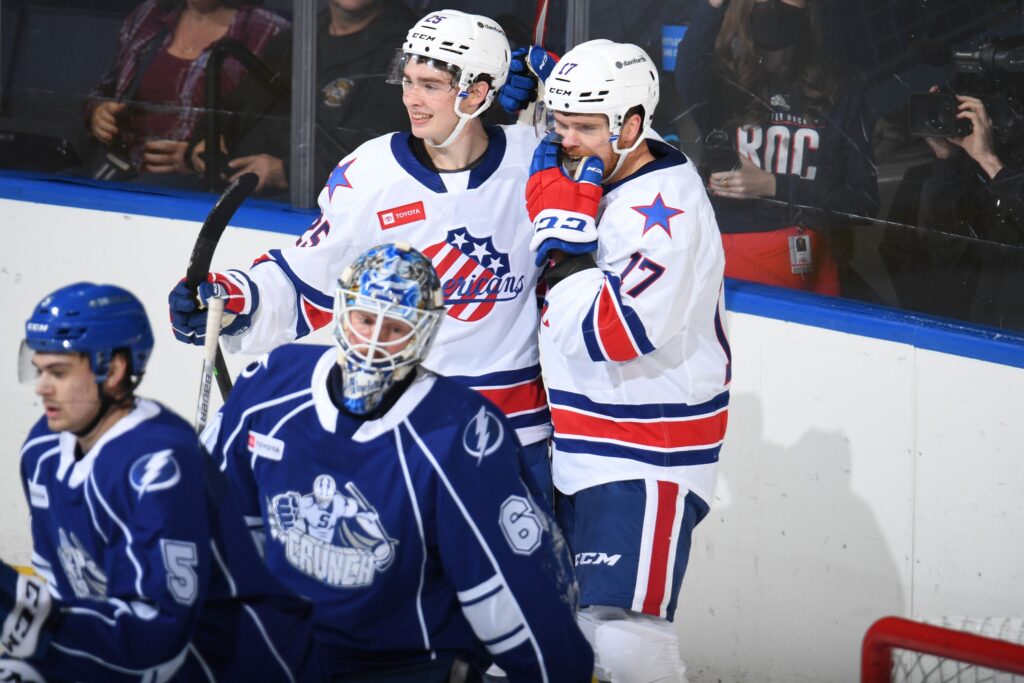 ROCHESTER – It took four years for this opportunity to materialize. During his first stint in the Buffalo Sabres organization, the Americans utilized Sean Malone as a checker, often giving him short minutes as their third- or fourth-line center.

Malone, 26, scored with some consistency despite playing down the lineup, hitting the 12-goal mark twice. Still, the West Seneca native craved a larger role.

“I’ve always wanted to show my offensive side,” Malone said after scoring the tying goal in last Wednesday’s 4-3 win over the Belleville Senators. “I didn’t think I had much of an opportunity to do that early on.”

So far, the trio has looked dynamic, combining for a whopping 10 goals and 28 points in eight games entering tonight’s road contest against the Wilkes-Barre/Scranton Penguins. Malone has accounted for two goals and seven points.

“The work I’ve put in to get to this point, I feel like I’m deserving of a good role,” Malone said inside Blue Cross Arena.

Amerks coach Seth Appert said Malone offers his neophyte wingers, both of whom are 20, “a steadying force.” While the Harvard graduate possesses a calm demeanor, he’s also highly competitive.

“That’s a unique trait,” Appert said. “A lot of times a lot of really high competitors can sometimes be a little hyper in their play. He’s got a real calming style of play while being a fierce competitor. He’s a good mentor to those guys. He talks to them on the bench. So it’s just seemed to work.”

“He’s just great at both ends of the ice,” Quinn said. “He’s really smart, a great playmaker and he’s super competitive. So he keeps a lot of plays alive for us, wins battles. How hard he plays, I think that brings me and JJ’s level of intensity up and we play that hard, too.”

“His offensive instincts are impressive,” said Malone, who had never scored a power-play goal for the Amerks. “For such a young kid to come in and do as well as he’s doing and take the big leap that he took from last year, I think, it’s really fun to be a part of. His ability to playmake, to score goals from anywhere, it’s been really fun to watch.”

Malone, a veteran of 200 AHL games, paid plenty of dues to earn his plum assignment.

After an injury-plagued 2018-19 season, the Sabres passed on giving him a two-way contract, instead offering him an AHL deal. He accepted, and he enjoyed a terrific bounce-back season.

But after the Sabres fired general manager Jason Botterill in 2020, Malone wanted a change of scenery. He spent last season in the Nashville Predators organization, playing his second NHL game and recording his first point, an assist.

In addition to his stint on Nashville’s taxi squad, he recorded five goals and 15 points in 23 outings for the Chicago Wolves, the Predators’ temporary AHL affiliate.

An opportunity to earn more NHL games helped Malone sign a one-year, two-way contract with the Sabres on July 28.

The Sabres have a dearth of centers, so at some point this season, Malone, who has played one game for Buffalo, could be recalled.

Having watched Malone in junior and coached against him in college, Appert said he knew he was an intelligent player. But he said he underestimated Malone’s work ethic and competitiveness.

“It’s really, really elite how he goes about his business every day,” Appert said. “And so our young guys have the great fortune of seeing guys like him and (Michael) Mersch and (Mark) Jankowski and (Brandon) Davidson and (Ethan) Prow and (Jimmy) Schuldt. There’s a lot of guys that they’re not older guys, they’re in their mid-20s, that do things right every day and the young guys can just follow suit.”