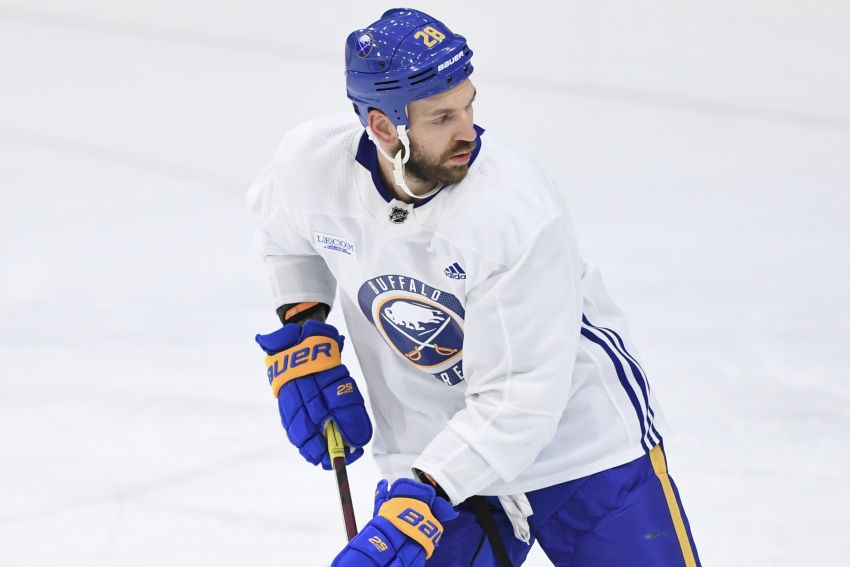 BUFFALO – Over the years, Zemgus Girgensons grew close to Rasmus Ristolainen and Sam Reinhart, two of his many ex-Sabres teammates.

Girgensons and Ristolainen joined the NHL together as teenage rookies in 2013. Reinhart arrived two years later.

Before the Sabres traded them in July, they became a part of Girgensons’ everyday life. In his first days back at the rink this season, he still expects to see them.

“I walk around and I think I’m going to run into Risto or Sam,” Girgensons said Thursday following the first session of training camp inside KeyBank Center. “So it’s tough. They’re our friends. But it’s business. Guys move on. We have a great group here.”

Girgensons, who missed all of last season after undergoing hamstring surgery, acknowledged “it’s a little sad” to see his friends leave. Still, in the same breath, he said meeting new players is “refreshing.”

Having experienced so much losing, Girgensons, 27, probably welcomes change. The longest-tenured Sabre is certainly used to it by now. Constant turmoil breeds upheaval.

Don Granato is the Sabres’ sixth coach in his nine-year career. Kevyn Adams is the fourth general manager. Darcy Regier drafted him 14th overall way back in 2012.

When Girgensons was a teenager, the Sabres began a two-year tank and a deep rebuild. That, of course, failed miserably and helped create a run of futility they’ve yet to escape. Eight years later, they’re rebuilding again.

“It’s hard to describe,” he explained. “We had opening meetings yesterday with Kevyn and Donnie, and just the energy that’s around here is different. I can tell, even Day 1 today, the practice, the pace was the highest I’ve ever seen. Guys are hungry, the young guys, they have something to prove. The guys are ready to work.”

Thursday was a special day for the high-octane Girgensons, who hasn’t played an NHL game since March 9, 2020. He smiled throughout his nine-minute chat with the media.

“Z’s excited to be back and we’re pumped to have him,” Sabres winger Kyle Okposo said. “I think that he doesn’t get the credit he deserves for what he brings. I know that there’s a huge emphasis on analytics, especially in the last couple years, but there’s no analytic for that guy. There’s zero.

“Like, that guy brings so much to our team and so much energy and he does everything the right way and that guy’s one of the best teammates I’ve every played with. So you can throw all the analytics out the window on him and we want him.”

Girgensons hadn’t enjoyed a formal skate in Buffalo since his legs split awkwardly as he tried to make a hit during a scrimmage Jan. 4.

“I couldn’t move my leg at all,” Girgensons said of his hamstring injury. “So right then I laid in the hallway for a while not moving. So I knew it’s not going to be good. I didn’t think it was going to be a whole season.”

The rest of the season was bittersweet. COVID-19 protocols often forced Girgensons to stay home. His wife, Katie, gave birth to a girl, Hadlee, on Jan. 25.

“That was a silver lining,” he said. “I got to spend time with her. But definitely mentally tough. You always want to be out there with the guys, and just sitting at home not being able to contribute nothing to the team was tough.”

Girgensons endured a long rehab. He spent two months with a brace on his leg. He started skating again in May.

The injury helped Girgensons realize how lucky he is to have a hockey career. When he represented Latvia at an Olympic qualifier last month, he said his first games in a year and a half felt “really emotional.”

“The first game I had so much energy that I haven’t had in many years,” he said. “I think I’ve never gone through an injury like that and I have way more appreciation for hockey the game. You sometimes take for granted when you keep playing but when it’s taken away, it’s a little different feeling then.”

Girgensons played center for Latvia, a position he practiced at Thursday between Okposo and Drake Caggiula. While Girgensons has mostly skated as a winger in the NHL, he pivoted a line early in his career and said he likes the move.

Notes: Adams said every player has received his doses of the COVID-19 vaccine. “That’s a great thing for us in terms of where we’re as we start camp,” he said. … Adams said defense prospect Mattias Samuelsson, who blocked a shot late in Friday’s Prospects Challenge opener, is week-to-week with a lower-body injury. … Adams said center Jack Quinn, the eighth overall pick last year, did not practice Thursday because the Sabres want to ease him back after hernia surgery. He could practice Friday. Forwards Brandon Biro (undisclosed, day-to-day) and Lukas Rousek (ACL surgery) also did not skate Thursday.

One thought on “Zemgus Girgensons excited to be back, believes Sabres’ rebuild can work”