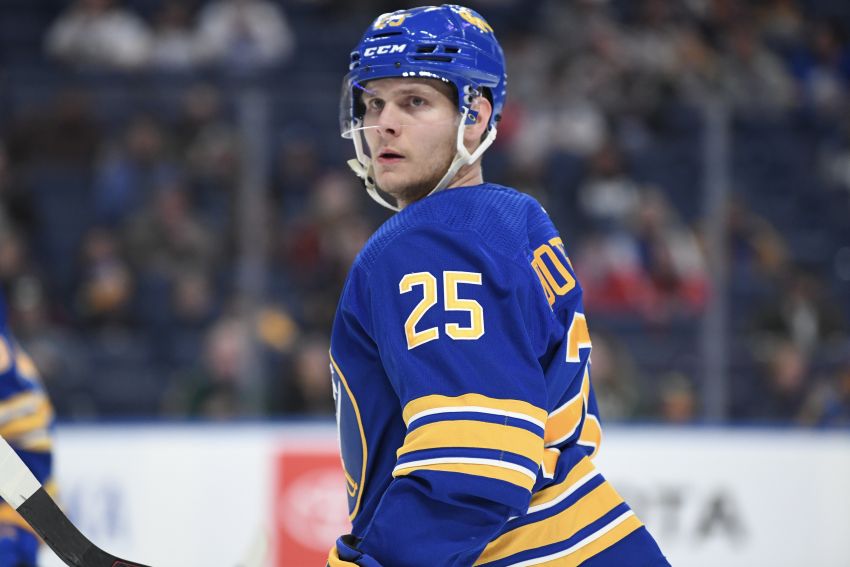 BUFFALO – In trying to evolve and score more goals, Sabres center Arttu Ruotsalainen has embraced a saying from his native Finland.

Ruotsalainen, 24, understands he can’t simply rely on his lethal shot from the perimeter. What worked in Europe and during his brief stint in the AHL won’t translate to success in the NHL.

To consistently score, the 5-foot-9, 187-pound rookie knows he must go to the net and battle for “dirty goals.”

Ruotsalainen sliced his way to the net in Saturday’s 4-3 overtime loss to the Detroit Red Wings, fending off defenseman Marc Staal, who’s six inches taller and 19 pounds heavier than him. When defenseman Colin Miller’s rebound bounced to Ruotsalainen beside the crease, he buried his second goal this season.

Counting two in the preseason, Ruotsalainen has scored all four of his goals around the net. He paid a price to score his first regular-season goal Oct. 28 against the Anaheim Ducks, zooming to the top of the crease with winger Rickard Rakell draped on his back.

“Sometimes you get a couple of easy goals there but it’s tough,” said Ruotsalainen, whose Sabres play a road game tonight against the Washington Capitals. “You have to read the game and be in the right spot at the right time.”

In previous stops, that spot was often the circle, where Ruotsalainen could utilize his wicked shot. He scored 16 goals in 19 games with Ilves Tampere last season before leaving for North America. He scored five times in 13 contests with the Rochester Americans before scoring five more goals in his first 17 NHL outings.

His shot, of course, is terrific by NHL standards. Still, it’s not as effective in the big leagues.

So Ruotsalainen grasped he needed to change his game.

“So for him, he hasn’t been able to score off his shot from outside, so being a competitive guy, he won’t settle for not scoring. So he’s working to the inside, and it’s a different type of scoring for him. It’s banging in rebounds, it’s tipping in, it’s getting pucks off his body. He’s in position to score those type of goals. I think that shows his determination to do that.”

Ruotsalainen played winger last season in Buffalo. This year, the Sabres’ dearth of pivots forced Granato to shift Ruotsalainen back to center, his natural position. Still, moving back to the demanding spot in the NHL is a difficult task.

At times, Ruotsalainen has struggled. He has mostly centered the fourth line, often skating short minutes.

“He’s trying to figure out what I can I or I can’t I do,” Granato said. “I know I was good at something at the previous level, but it doesn’t fit right now. And he’s gauging that every day. You can see that in practice. The underlying thing I love about him is he won’t be denied, he’s extremely competitive. And that’s one reason why I would stick with him as a coach, because he’s showing me that he’s going to keep getting better.”

Ruotsalainen and his linemates, Anders Bjork and John Hayden, might’ve enjoyed their best game together Saturday. Ruotsalainen said the trio did not rush plays and generated confidence by possessing the puck.

After skating a career-low 6 minutes, 43 seconds in Thursday’s 5-2 loss to the Seattle Kraken – Ruotsalainen hasn’t secured a spot on the power play this season – he jumped up to 12 minutes, 12 seconds Saturday.

Having played big minutes throughout his career, Ruotsalainen acknowledged it can be hard getting into a rhythm when you’re playing fewer minutes. Still, Granato said he has adjusted to it well.

“So it is a little more challenging because you’re not in a rhythm, but it can only be an excuse for your long-term success, really. And I think Arttu’s handled that great.”

When the Sabres returned from Seattle, Granato said some imaging told them Olofsson’s injury will heal.

“It’s a situation there with him when he does get back, he’ll be playing at 100 percent,” he said. “Until he’s not, where he has that injury is going to affect his play.”

Olofsson, who’s day to day, did not practice Sunday.

“He could be popped in the next game,” Granato said. “It’s that close.”

In other news, goalie Craig Anderson’s upper-body injury prevented him from practicing Sunday. He did not accompany the team to Washington.

“That injury is something that there’s just a lot of gray and you’re going day to day,” he said.