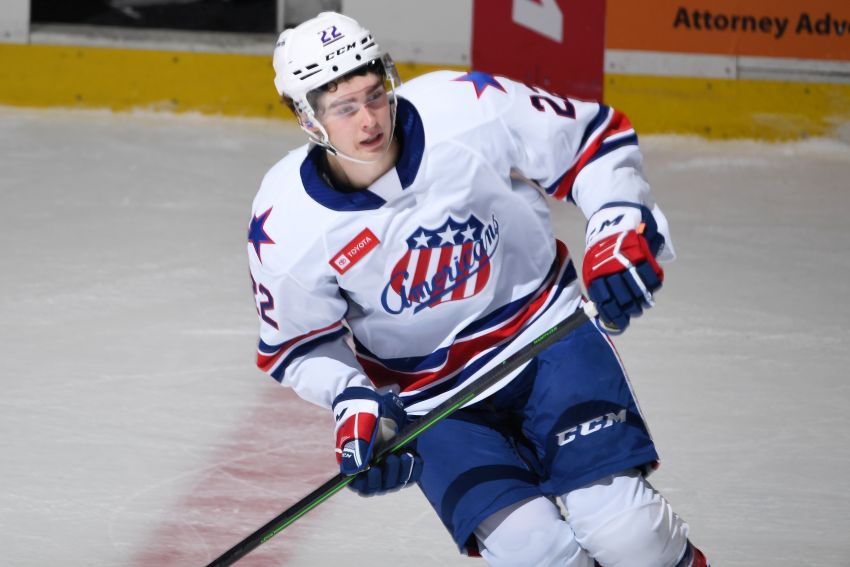 There’s a theme in the four goals Buffalo Sabres prospect Jack Quinn has quickly scored for the Rochester Americans this season.

In his first three outings, Quinn, 20, consistently possessed an attacking mindset, driving to the so-called “dirty areas” around the net.

“He’s trying to get to hard ice,” Amerks coach Seth Appert told the Times Herald by phone Monday. “When you get the hard ice with the talent he has, usually good things follow.”

So far, Quinn, the eighth overall pick in 2020, has performed dynamically, scoring in every game.

In the opener Oct. 17, the 6-foot, 176-pound Quinn tipped a shot low in the right circle. On Friday, he battled for position low in the left circle before unleashing a quick wrist shot. On Saturday, he converted two passes from rookie linemate JJ Peterka, burying his own rebound at the crease before connecting in front.

Entering tonight’s road game against the Belleville Senators, Quinn is one of 10 AHL players who have scored four goals. The other nine have played four or five games. Quinn has recorded all four of his goals at even strength.

During his 15-game run with the Amerks last season, Quinn, who’s still considered a rookie, said he did not get inside enough to score.

“It showed in the number of goals I scored,” said Quinn, who scored three times before undergoing season-ending hernia surgery. “It wasn’t good enough. So that was kind of a point I wanted to make this year.

“It was something I did well in junior when I had my big season in my draft year … When I got to pro, it was a little tougher. I think I faded away from it a little bit.”

Still, other factors besides Quinn’s assertiveness have contributed to his torrid start. He has been skating at left wing, the position he played during his breakout 52-goal junior season with the Ottawa 67’s in 2019-20, beside Peterka and center Sean Malone.

Appert said he noticed during rookie camp that Quinn and Peterka, the 34th pick in 2020, shared chemistry on and off the ice. So he put the wingers together with Malone, a young veteran and tenacious two-way presence.

Quinn said Malone drives the line. Appert said the West Seneca native is a “stabilizing presence” for the neophytes.

“All three of us, we kind of just work off each other well, so there’s kind of that instant connection,” said Quinn, who has also registered two assists this season.

“I feel like I’m a lot more dangerous being able to cut the middle and lean on my forehand when I cut to the middle,” Quinn said. “I feel like I can’t get squeezed off as much since the puck’s kind of on the inside of the ice. Like, if (I’m) skating up the left side, I could have the puck on my forehand and it’s in the middle of the ice on the inside of my body. So D-men can’t really angle me off and squeeze me off.”

Quinn said having two wingers on their off side – Peterka, 19, is a left-handed shot – creates better one-timer opportunities for them.

But Quinn might thrive at any position he plays. Beyond his natural talent, his maturity helps make him a top prospect.

Quinn works to hone his craft. On Monday, for example, Appert said Quinn spent about 35 minutes shooting pucks in the Blue Cross Arena basement before practice. After the 80-minute practice ended, he stayed on the ice an extra 20 minutes.

Appert also said Quinn acts on advice he receives. He returned for his second season having improved his lateral movement and shot deception over the summer.

“The beauty of when you’re meeting with Jack is … he is an active participant in his own development,” Appert said. “He is not just sitting there (letting) you spoon feed him. It’s a conversation with him, not a lecture.”

But coming off his surgery and a long offseason, Quinn struggled in his first two preseason outings with the Sabres.

“Just wasn’t how I wanted to play,” he said.

In his final appearance, however, he was one of the Sabres’ best players.

“It was nice to have that kind of game right before going down to Rochester knowing I could be a good player there, too, and kind of bring it down with me,” Quinn said.

Appert said: “He came down here with a really, really good attitude and perspective about what he was going to come down and try to do.”