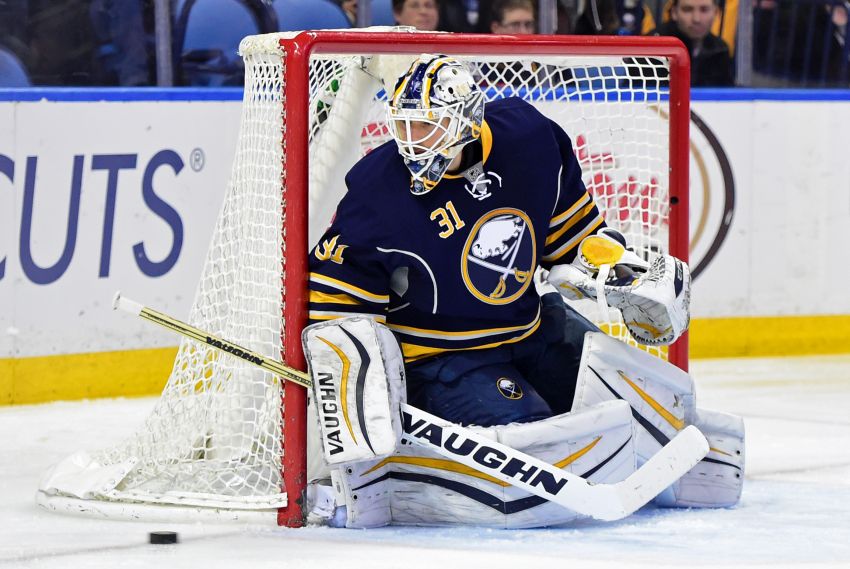 BUFFALO – Having traveled around the NHL in a secondary role for years, Sabres goalie Chad Johnson usually gets pegged as a career backup.

Johnson, after all, is just months away from turning 30 years old. Goalies usually grab the No. 1 job by their mid-20s. The Calgary native has played for five teams, including four in the last three years. He had never played more than 27 games in a season before this year.

But in just his third full campaign, Johnson has handled regular duty splendidly, quietly becoming one of the league’s best goalies while making a career-high 40 appearances.

Johnson will likely start tonight’s road tilt against the Detroit Red Wings, his fifth straight nod with No. 1 goalie Robin Lehner resting the same ankle that sidelined him earlier this season.

“I know Chad has never been an NHL starter in terms of (being) No. 1 in the net, but he’s had numerous amounts of success,” Sabres coach Dan Bylsma said Friday.

After Lehner was injured opening night, Johnson mostly split duty with rookie Linus Ullmark for three months. When Lehner returned in mid-January, Johnson took a back seat, and he struggled receiving only sporadic action – he made only five appearances in a 47-day stretch – losing three straight decisions.

Johnson has found a groove again, winning seven of his last eight starts. His overall statistics – 19-15-3, 2.39, and .918 – are strong. Johnson has made some spectacular saves this season, but he usually showcases a calm style with limited movement.

“Probably his best attribute as a goalie is his calm, cool, collectiveness, his positional play,” Bylsma said. “You might not go right to athleticism with his strength of how he plays in net. With the number of acrobatic and the big saves and the athletic saves he’s made this year, it’s a little bit more than a small highlight reel.”

With one more victory, Johnson, an unrestricted free agent following the season, will become the Sabres’ first 20-game winner since Ryan Miller won 31 times in 2011-12.

Each additional day Lehner is shelved decreases the odds the Swede will play again this season, meaning Johnson could start the final seven games if the Sabres don’t give rookie Jason Kasdorf a look.

“You really see him be comfortable with the opportunity to take the net and run with the net, having it here the last little bit and moving forward,” Bylsma said about Johnson.

Still, despite Johnson’s success, the Sabres might move forward without him. Johnson has likely played well enough to earn a two- or three-year contract. It’s possible the Sabres will only offer a one-year deal.

Lehner, 24, has looked like a No. 1 goalie in 21 appearances, posting a .924 save percentage. The Sabres gave up a first-round pick for him. He seems entrenched as the starter.

Ullmark is also waiting in the wings. The loquacious Swede, 22, often displayed the qualities of a starter during a 19-game run earlier this season, his first NHL action.

But Ullmark has been yanked from his last two AHL starts. He has a ghastly 3.27 goals-against average and a .906 save percentage in 23 games with the Rochester Americans. The Sabres probably want him to get another year of seasoning in the minors.

So if Johnson leaves, the Sabres will need a new No. 2 goalie. Nathan Lieuwen, 24, has been backing up Johnson and is a restricted free agent following the season. He needs more time in the minors.

Where could Johnson land? How about with his hometown Flames? They have the league’s worst goaltending and zero netminders with NHL experience under contract for next season.

Johnson has spoken about his desire to become a starter. The Flames could offer it.

The Sabres went 5-3-2 in 10 afternoon home games this season and 6-3-2 overall, meaning they will likely want to schedule about the same amount or even more next year.

Sabres general manager Tim Murray wanted more afternoon tilts added because he believes playing earlier in the day is advantageous for a young team and difficult for opponents. The Sabres had three afternoon games in 2014-15.

When winger Hudson Fasching cut to the net and stuffed the puck in early in Saturday afternoon’s 3-2 win against Winnipeg, he became the first Sabres rookie to score on his first shot in his NHL debut since winger Zemgus Girgensons on Oct. 2, 2013.

Girgensons assisted on Sam Reinhart’s third-period tying goal, just his fourth point in 33 home games. Incredibly, he hasn’t scored a goal at home this season. All five of his goals have been scored in 31 road appearances.

The Latvian had 15 goals in 61 games last season, including 10 in 32 home appearances.

“We noted and knew where our record was at,” Bylsma said. “It was abysmal. … We’ve turned it around a little bit.”