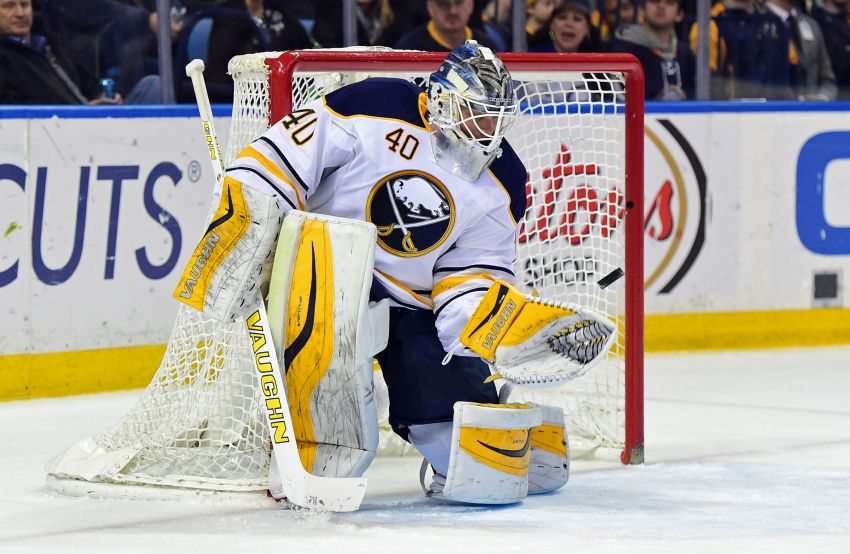 BUFFALO – In the beginning of the season, back when the Sabres’ netminding was a huge question mark, coach Dan Bylsma said he scribbled some numbers on a board in goalie coach Andrew Allen’s office.

Countless components must mesh for success in the modern NHL, but if a coach doesn’t receive great goaltending in this low-scoring era, his team is essentially cooked.

Right now, Sabres goalie Robin Lehner has compiled stronger numbers – a 2.22 goals-against average and a .938 save percentage, statistics well above the league average – than whatever Bylsma hoped for months ago.

“They’re better than those numbers I wrote,” Bylsma said Friday inside HarborCenter after the Sabres prepared for tonight’s road tilt against the Boston Bruins.

Of course, the 6-foot-5, 240-pound Lehner has looked sharp in limited action. The Swede, 24, has played only five games since returning from a high ankle sprain that sidelined him more than three months.

Still, Lehner, who won two straight games before Chad Johnson started Thursday’s 3-2 shootout loss to Boston, has kept improving. After allowing three goals in his return Jan. 15, he has only let in two goals in each of the last four contests, a span in which he has a .947 save percentage.

“After the first game, (he’s) been very, very good and solid in the net,” Bylsma said. “His control has been pretty solid for a guy who’s an athletic guy, a big guy who likes to be aggressive in his saves and his technique. If the goalie keeps playing at this level, you’re pretty fortunate to have that.”

The Sabres paid a hefty price to the Ottawa Senators – a 2015 first-round pick in a deep draft – and also took on a $3 million graying fourth-liner in David Legwand to acquire Lehner to be their new No. 1 goalie on June 26.

Given Lehner had played only 86 NHL games and was slowly recovering from a season-ending concussion he suffered almost a year ago, it was a risky move. Then he went down 28 minutes into his Sabres debut.

Nonetheless, Lehner has recovered nicely from perhaps the worst injury a goalie can suffer. His right ankle, he said, will be sore for the rest of the year.

“It’s going to linger for a bit, but it’s still functional,” he said. “So it’s no problem.”

The ultra-aggressive Lehner has no problem communicating with his teammates. He might be the NHL’s biggest goalie and its loudest and most ferocious. Lehner’s booming voice can constantly be heard on the ice. It’s also common for him to slash or go after opponents who dare to get near his crease or hit him.

“He’s a big man,” Weber said. “He plays big. He plays a little angry. It’s nice and refreshing as a D-man to have a guy like that. It’s newer for me to have a guy back there that’s that involved vocally and physically in the game.”

On-ice communication might be hockey’s most underrated and underutilized skill. In the past, the Sabres were too timid and didn’t talk enough.

“The more of it we can get the better we are and the faster we can get out of the D-zone,” Weber said. “You’re skating back and you have Lenny yelling at you, a guy yelling over or whatever it is, it helps out huge.”

Why does Lehner talk so much?

“I like things being done the way I want them being done,” he said. “Talking to my defensemen and stuff, it just gives me a clear view of what’s going to happen the next play. … The defensemen here, they’re pretty good at listening, and we’re working very well together.”

Then there’s Lehner’s aggressiveness, something he thinks he has reigned in over the years.

“I just don’t like being slashed,” Lehner said. “If they slash me, I’m going to hack them back.”

Even if he controls his emotions better these days – put his name into Youtube.com and there are some epic fights and meltdowns from years past – a hard whack or two a night to an unwanted visitor has become a common occurrence already this season.

“A whack or two is enough,” he said. “Then hopefully you get them good the first time.”