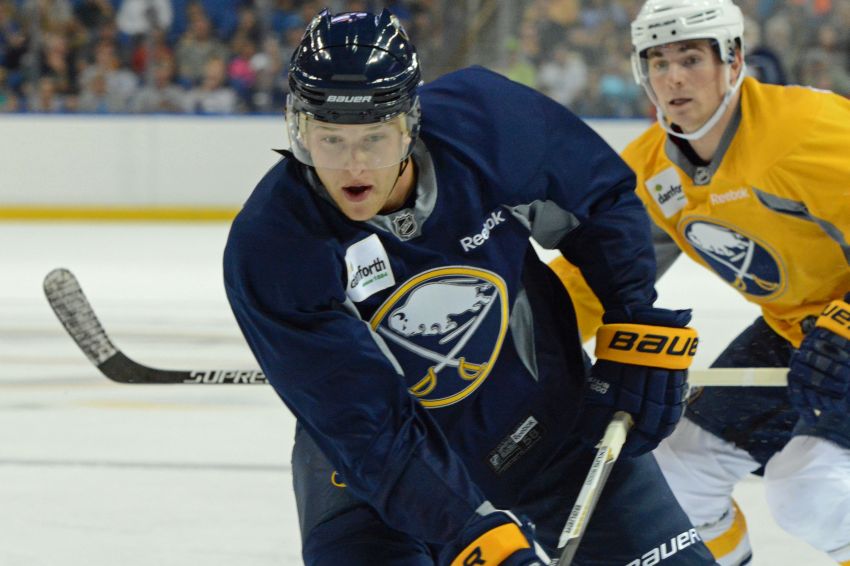 BUFFALO – Prior to his NHL debut Saturday afternoon, Sabres winger Hudson Fasching told his family and friends he wouldn’t know what to do if he scored a goal in his first game.

The affable Fasching, who always seems to be bursting with energy, joked he might “blackout on adrenaline.”

“That was almost the case,” a smiling Fasching said after scoring a nifty goal 8:37 into the Sabres’ exciting 3-2 comeback win against the Winnipeg Jets.

The 6-foot-2, 216-pound Fasching has been hyped as a power forward, and he delivered just two shifts into his highly anticipated debut, scoring one of the Sabres’ slickest goals this season.

With the Sabres down 2-0, Fasching grabbed the puck from Mark Pysyk on the left wing and undressed Jacob Trouba before cutting to the net and stuffing the puck past goalie Michael Hutchinson.

“I was so excited out there,” Fasching said. “It was a really happy moment for me.”

As the capacity crowd of 19,070 fans inside the First Niagara Center roared for Fasching, who left the University of Minnesota last week, he zoomed to the bench to celebrate with his new teammates.

“I thought Hudson’s first couple shifts were really high-energy, showed his speed,” Sabres coach Dan Bylsma said. “They were nothing like his sprint back to the bench after the goal. … He came flying to the bench. It was infectious with the energy he came back to the bench with how excited he was.”

The energy Fasching created ignited the Sabres, who trailed 2-0 just 5:09 into the contest thanks to goals from Nikolaj Ehlers and Andrew Copp.

“We needed to get back in the game, and we get back in with a big goal, a big move and a strong play,” Bylsma said.

Said Sabres center Jack Eichel, who scored the winner 4:07 into the third period: “It was huge.”

A year to the day a vocal portion of the crowd here rooted for the Sabres to lose so they would secure the draft pick that became Eichel, the fans received a taste of what could be a very bright future.

Eichel and Sam Reinhart, the last two second overall picks and two top rookies, buoyed the Sabres late. After Reinhart tied it 1:23 into the third period, he fed a streaking Eichel a no-look backhander after stripping Alexander Burmistrov at center ice. Eichel quickly scored from the slot, his 23rd goal and 50th point.

“Right when he got it I was screaming for it,” Eichel said. “I had kind of generated a little bit of speed and he hit me in stride. It was a great play by him.”

Incredibly, the oldest Sabre to score Saturday was Fasching, who turns 21 on July 28.

“I didn’t know that,” Bylsma said. “It says he went to at least three years of college.”

Fasching knew three seasons starring for the Golden Gophers was enough. That’s why he signed his three-year, entry-level contract on Monday.

The last week, Fasching said, has been a “whirlwind.”

“I think that’s been the perfect word for me,” he said. “This whole past week, it feels like yesterday I was at the University of Minnesota and now I’m here. It’s definitely a quick turnaround.”

The Minnesota native started the game on the fourth line beside David Legwand and Matt Moulson before earning a third-period promotion beside Ryan O’Reilly and Evander Kane.

“Definitely was not expected,” Fasching said about switching lines. “I was sitting on the bench and coach kept tapping me and I was like, ‘What, am I in the way or something?’ And he was like, ‘No, you’re out there.’ And I was like, ‘OK, I’m going.’

“They’re fantastic players and it was incredible to play with them. They make it easy for me.”

By the end of the game, Fasching started thinking about the Sabres’ future.

“A lot of young guys out there, two of the guys I know a little bit better than most just because I played with them, I played against them at prospect camp,” he said. “It’s cool to be a part of that.”