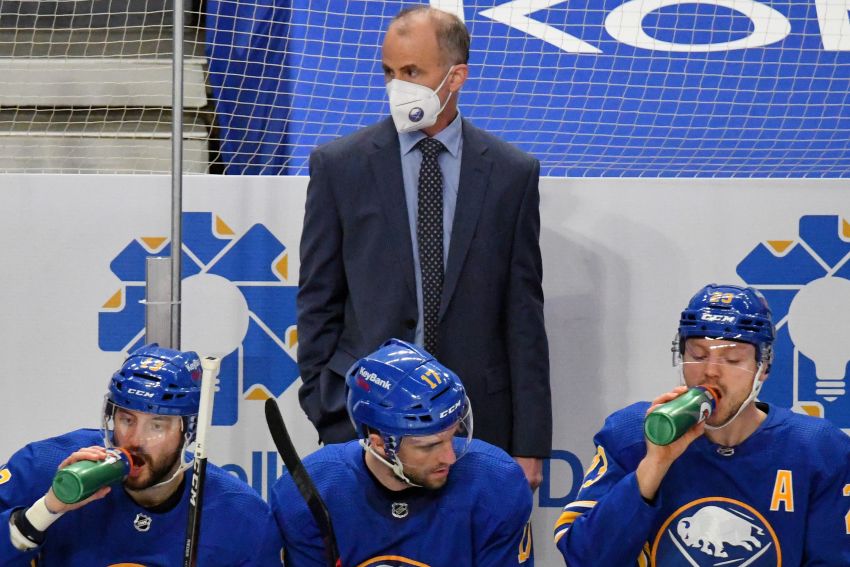 Don Granato has quickly made an impact on the Sabres. ©2021, Micheline Veluvolu

Even before Don Granato started winning games and unlocking talent from struggling players, Buffalo Sabres general manager Kevyn Adams said he wanted the interim coach to be in the mix when he began pursuing a regular coach.

“From the beginning, I always thought that Donnie should be part of this conversation regardless of what happens exactly on the wins and losses of our team,” Adams said on a Zoom call Tuesday after the trade deadline.

In 13 games since replacing Ralph Krueger, Granato has compiled a 4-7-2 mark. The Sabres are 4-2-1 in their last seven entering Tuesday’s road game against the Boston Bruins.

Beyond wins and losses, Granato, 53, has transformed the Sabres into a competitive team. They no longer possess a feeble offense and a porous defense. They’ve also started responding to adversity and roaring back in games.

Adams might give strong consideration to removing Granato’s interim tag.

“Donnie Granato is a person that I absolutely think is in the mix for this and should be,” Adams said. “He’s a great hockey guy, he’s a great person and it think the important thing is the players do have a lot of respect for him and that goes a long way as well.”

In Sunday’s 5-3 win road win in Philadelphia, the Sabres erased two deficits to stun the Flyers.

Adams said the Sabres have started “playing with purpose.”

“I see a bit of more structure to our team in terms of defensively, we look more on our toes pressuring,” he said. “And we have a bit of it looks like more of an understanding of the why: Why are we doing certain things?

“And on the offensive side, I saw before maybe a team that was caught in the middle. … We had a lot of talented players but we were kind of just this in between, it felt like. Where now we’re a bit more on our toes, and feel like our D are freed up to be getting up ice.”

Adams said the Sabres have also raised their “competitiveness” under Granato.

“When we do practice, we’ve had better tempo, better compete,” he said. “From the data that we get after practice, the numbers show that as well. And what I think that’s translating into is a team that can skate and have better pace and compete hard. So Donnie’s done a nice job.”

Adams said he has had “very, very serious conversations” over the past week with an assistant GM candidate.

The rookie GM has been working without an assistant since he took over for Jason Botterill almost 10 months ago.

Adams said he plans to continue talking to potential hires.

The Sabres fired 22 members of the hockey department when they dismissed Botterill.