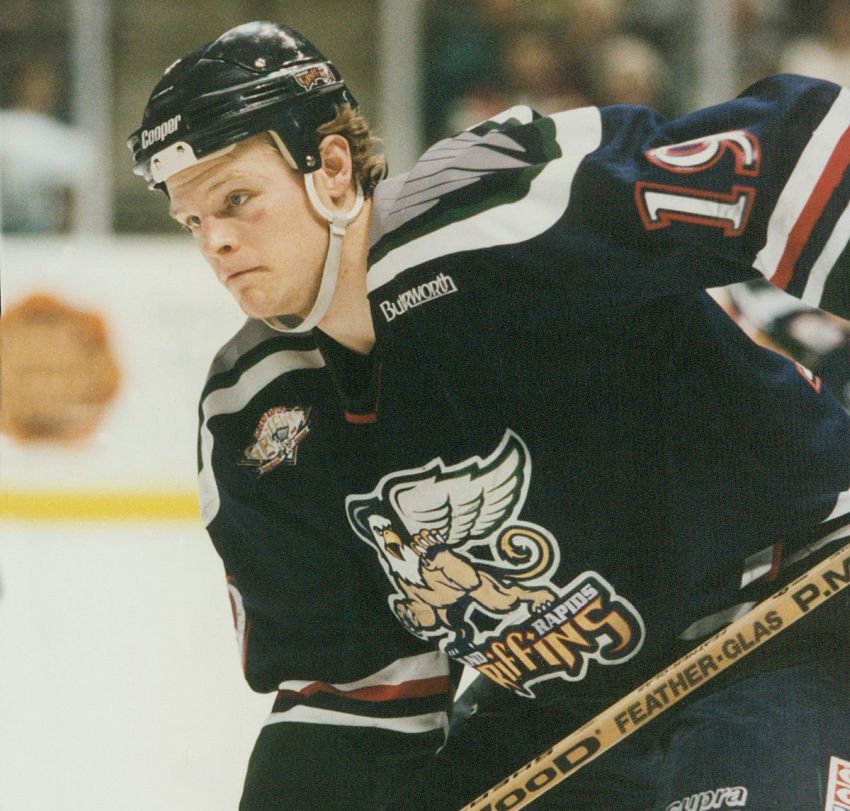 As Kevyn Adams moved up and around the hockey world during his unlikely journey to becoming the Buffalo Sabres’ general manager last month, he kept challenging himself and taking risks.

Instead of taking a job in an NHL front office after the Sabres fired him as an assistant coach in 2013, Adams accepted Terry and Kim Pegula’s offer to start the Academy of Hockey at Harborcenter from the ground up.

His work establishing the program and running the Jr. Sabres impressed the owners so much they promoted him to the team’s senior vice president of business administration last year. How many former players end up on the business side?

In both stops, Adams trusted his talents would help him succeed in his new endeavors.

Adams, however, had started betting on himself long before he began those gigs.

Twenty-four years ago, Adams’ pro career got off to a rocky start. The Boston Bruins, who had drafted him 25th overall out of Miami University in 1993, offered low-ball contracts and trashed his talents.

GM Harry Sinden said Adams wasn’t ready to play in the NHL, according to The Boston Globe. Sinden’s assistant, Mike O’Connell, took it a step further, telling the paper in 1996 that Adams hadn’t “matured enough to realize how hard it is at the next level.”

“I didn’t think they were being fair in terms of market value for me considering my draft position,” Adams told The Cincinnati Enquirer in 1996.

So a disappointed Adams refused the offers and started forging his path to the NHL via an unconventional route. The Clarence native signed with the Grand Rapids Griffins, an independent expansion team in the International Hockey League.

“He wasn’t going to capitulate to anybody else,” Dave Allison, Adams’ coach in Grand Rapids, told the Times Herald. “He was going to plant his feet, and that’s what I think he’s done everywhere he’s been. He doesn’t look ahead, he doesn’t look behind. He takes care of where his boots are.”

He added: “We got an excellent player that we never expected to get.”

While IHL teams had veteran-laden rosters, it was “AAA hockey,” the same level as the American Hockey League. The IHL offered Adams a terrific opportunity to develop.

Still, it was a risky decision. If the center struggled, instead of earning an NHL contract from another team as a free agent, he could find himself buried in the minors.

“It was a huge chance he took to bet on himself, but that’s the kind of self-belief he has,” said Barry Schutte, Adams’ teammate at Miami.

Schutte said Adams’ preparation helped him generate the confidence he would need to thrive. As a college player, he possessed a pro mentality, a rarity in those days.

“His mode of operation and how he conducted himself and the investment he would make in himself every day gave him that self-confidence that (said), ‘Hey, I can do this,’” Schutte said.

Allison said Adams “was just flat-out hungry” as a rookie.

The affable Adams would grow into several roles as a 22-year-old rookie in 1996-97 while endearing himself to his teammates.

One meeting, Allison said, helped change Adams’ season. After Christmas, Adams asked Allison what he must do to earn a bigger role.

But Adams had waited until he felt confident and established trust – “He proved himself that he was reliable,” Allison said – before requesting additional duties.

He added: “It’s just who Kevyn is … he didn’t want something for nothing.”

Adams would finish with 22 goals and 47 points in 82 games as the Griffins made the playoffs in their first season.

“He started to create more offense,” Allison said. “If you look at it, 47 points in that league as a rookie right out of college is pretty gosh darn good, and Kevyn Adams was an important part of (our) success.”

Adams parlayed his standout season into a contract with the Toronto Maple Leafs, and he began his 10-year NHL career in 1997-98.

When Allison ran into Adams at an NHL Draft party in 2017, he saw the same man he had coached 20 years earlier. Adams even mentioned their chat.

“When I saw him in Chicago,” Allison said, “(I saw) the smile, the humility and just the enthusiasm for life.”