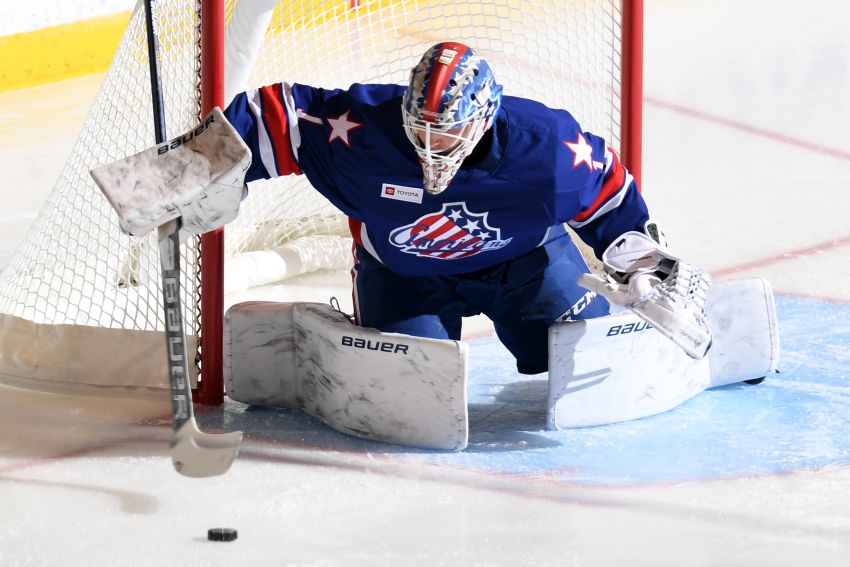 BUFFALO – Not since Ryan Miller arrived here in 2002 has a goaltender’s debut been so highly anticipated. After less than two seasons in the minors, top Sabres goalie prospect Ukko-Pekka Luukkonen is verge of starting his first NHL game.

Luukkonen, of course, likely won’t stick in the big leagues for long. Most goalies take years to mature, and the Finn, 22, has only played 25 AHL games.

Just look at Miller, the Sabres’ all-time wins leader and the 2009-10 Vezina Trophy recipient. While he made his NHL debut Nov. 19, 2002, it took him another three years to crack the Sabres for good. He played 170 games with the Rochester Americans.

But some exposure to the NHL can certainly buoy Luukkonen’s development. So for the time being, one of hockey’s best goalie prospects has a roster spot.

The 6-foot-4, 220-pound Luukkonen backed up veteran Dustin Tokarski on Tuesday, the first time he dressed for an NHL game. From the end of the bench, he watched Boston Bruins goalie Tuukka Rask, a fellow Finn, record a 32-save shutout.

Interim coach Don Granato said following Wednesday’s practice the Sabres, who host the Bruins tonight and Friday, hadn’t set their goaltending schedule yet. He said Tuesday that Luukkonen was “in consideration” for tonight’s contest.

“He’s gotten himself to a situation where he’s had the time to observe, obviously from the bench, think about it and immerse in it,” Granato said on a Zoom call following Wednesday’s practice inside KeyBank Center.

Luukkonen, a second-round pick in 2017, 54th overall, said simply watching the action up close benefited him.

“It helps to see what the pace of the game is and how the level in the NHL looks like,” he said. “You just try to soak up as much as you can and learn how the play falls and what the speed is like. Also it helps to be with the team here and get to know the guys.”

Tokarski knows Luukkonen, having spent AHL training camp and the early portion of the season in Rochester as his goalie partner. During their first stint together, Tokarski learned Luukkonen possesses the personality and work ethic to enjoy a successful NHL career.

“It wasn’t a ton of time in Rochester but definitely enough to get to know him,” Tokarski said. “I think he’s a super good kid, down to earth, humble, works his butt off in practice. So I think he’s got all the traits to be an elite goalie.”

Granato said Luukkonen, who was recalled Saturday, has “a real nice calm presence to him.”

“But he has a presence to him,” he said. “You notice it. He has some unique qualities to him in regard to that. So, as all the guys, I’m excited to see him with this opportunity coming for him. He’s worked hard for it.”

The unpredictability of this season has taught Luukkonen how hard he must work. After starting the campaign on loan with HC TPS, a Liiga team in Finland, he joined the Amerks for training camp in January.

Then after Luukkonen played just eight games, the Amerks started a three-week COVID-19 pause in March.

“It brings up the importance of daily work and kind of being ready,” Luukkonen said of the odd season. “If anything happens, you have to be ready. This year, for me, there have been a couple breaks of hockey and then it picks up. The times you had before the break, if you haven’t done your exercises or extra work you’re not going to be ready after two weeks.

“It shows how important the daily work is kind of being prepared for anything. It kind of builds you up and you try to learn what it takes to be a professional. I think this has been a really good year for that.”

Luukkonen will likely be the second elite goalie prospect to make his NHL debut this week. On Tuesday, Spencer Knight, the 13th pick in 2019, started for the Florida Panthers. Knight, 20, recently left Boston College after his sophomore season.

“It’s always cool to see young guys get their chance and play well,” he said. “Kind of knowing you’ve faced off against them and they’re doing well and playing well, it’s one of the things that makes you want it even more. You want to get your chance to play on that level.”

Granato said Sabres defenseman Will Borgen, who has missed the last 32 games after fracturing his right forearm, will likely return tonight or Friday.