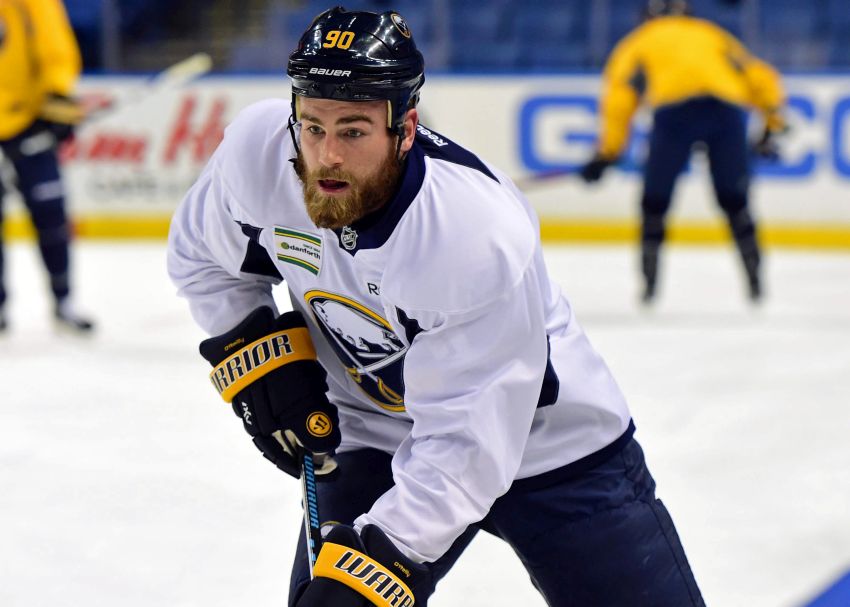 BUFFALO – The sample size, of course, is pretty small – barely eight games over the last two weeks. Still, the line comprised of slick rookies Jack Eichel and Sam Reinhart and young veteran Evander Kane has given the Sabres a legitimate No. 1 NHL scoring combination for the first time in years.

Think back a bit. When was the last time the Sabres had a top trio on par with some of the league’s best? It’s been a long time.

Since Sabres coach Dan Bylsma put them together during a 2-0 loss Feb. 27 in Los Angeles, the youngsters have amassed eight goals and 20 points.

But top center Ryan O’Reilly’s upcoming return from a right foot injury that has sidelined him for 11 games has created a good problem for Bylsma. O’Reilly fully participated in Monday’s 90-minute practice inside the First Niagara Center, his first team session since a puck hit him Feb. 19.

O’Reilly could play Wednesday when the Sabres host Montreal.

With the Sabres’ most versatile presence almost back, instead of keeping the No. 1 line together, Bylsma moved Kane to the left wing Monday with O’Reilly and Nick Deslauriers. Zemgus Girgensons replaced Kane beside the Eichel and Reinhart. Bylsma also said O’Reilly’s older brother, Cal, could occasionally spell Deslauriers.

Clearly, Bylsma wants to spread out the scoring to two lines and examine some combinations during the final 12 games.

“A little more of a long-term sight as well,” Bylsma said. “But I think Evander adds speed next to Ryan. Jack has speed, and Sam next to Jack has got an intelligent player and a player he’s blending with right now pretty well.”

Reinhart played well with O’Reilly earlier this season, but he has showcased some strong chemistry with Eichel recently.

In mid-September, when Bylsma briefly put Eichel and Reinhart together during a rookie camp game, he never could’ve envisioned the last two second overall picks would “be really dynamic together” by March, he said Monday.

Bylsma’s options for his top lines are limited because he wants to keep the checking trio of Marcus Foligno, Johan Larsson and Brian Gionta intact.

That means he shifted Girgensons, who played his best hockey this season beside Eichel earlier this winter, back beside the center.

Girgensons has struggled offensively all season, scoring only five goals and 14 points in 59 appearances. The Latvian, who had 15 goals in 61 games last season, has zero points in the eight games and zero goals in the last 18 contests.

“I think going into the season you were projecting and looking for more along the lines of what we saw the previous year from Zemgus,” Bylsma said. “I think his best this year has been next to Jack and on his line. … Going back there’s going to be a good opportunity for him to get where we think he can be producing for our team.”

O’Reilly, 25, has produced all season. Despite missing almost a month of action, he still has a team-high 32 assists and 49 points.

On Saturday morning, hours before the Sabres’ 3-2 overtime win against Carolina, O’Reilly told Bylsma he was ready to return following a 90-minute skate.

O’Reilly hadn’t even participated in a full practice with his teammates yet. That was only his second time on the ice since getting hurt.

“He came off the ice and decided, ‘Oh, I can play today. I’m not sure how much I would have in the tank. I want to play at 1 o’clock today,’” Bylsma said. “Obviously, that wasn’t going to happen. (Monday) was an important day.”

O’Reilly added: “I think every drill we did we didn’t have any issues.”

Naturally, O’Reilly, who has quickly become the Sabres’ heart and soul, has no issues with his new linemates. He’s looked good beside Kane before. While Deslauriers has mostly been a fourth-liner this season, O’Reilly briefly centered him in the fall.

“He’s a smart player,” O’Reilly said about Deslauriers. “He does everything – he blocks shots, he hits, he’s aggressive on the forecheck. Every team worried when he’s on the ice. He’s not an easy guy to play against.”

In other news, Bylsma said winger Tyler Ennis, out since suffering a concussion Dec. 30, could play again this season.

“I’m still holding out hope,” he said. “He is getting better, and that really is why I hold out hope for him.”

Bylsma said Ennis, who has played only 23 games, has been progressing with his workouts.

The Sabres have signed goalie Jason Kasdorf, 23, to an entry-level contract, the team announced Monday night.

It’s a one-year deal worth a prorated $925,000 in the NHL and $70,000 in the AHL, according to capfriendly.com. Kasdorf will become a restricted free agent following the season.

The Sabres acquired Kasdorf in last year’s blockbuster trade with Winnipeg that brought Kane to Buffalo.

Kasdorf will report to the Sabres, according to The Buffalo News.