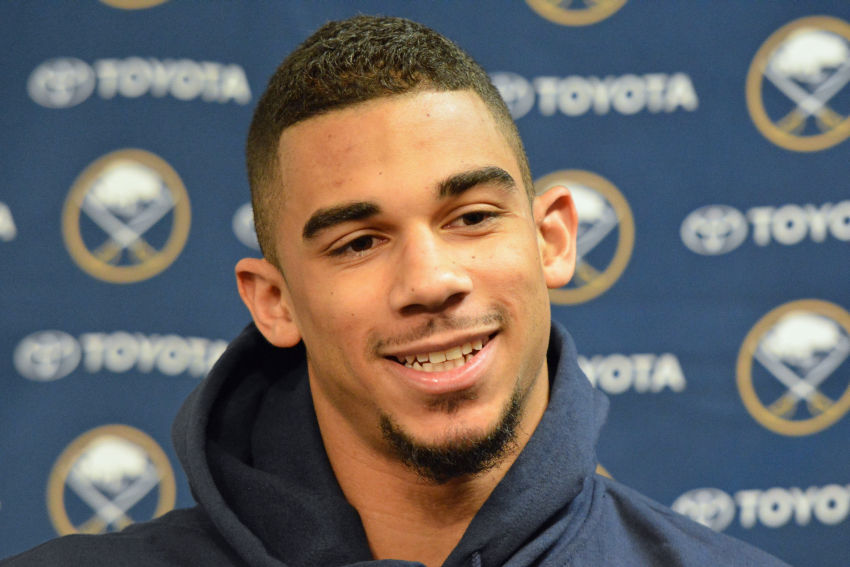 “Thirty is just kind of a set number,” Kane said Thursday after training camp opened inside the First Niagara Center. “I’ve already scored 30. So maybe I want to score 40 or 50.”

Yes, Kane, seven months removed from shoulder surgery, has set the bar extremely high for his first season with the Sabres.

Still, Kane’s brimming with confidence as he begins his seventh NHL season.

Why shouldn’t he be? He senses he has a career-changing opportunity. With his shoulder fully healed, his tumultuous tenure with the Winnipeg Jets over and a prime spot on a scoring line – mega-prospect Jack Eichel or Ryan O’Reilly will likely center him – Kane could enjoy a breakout season.

Right now, however, Kane said he feels “like I’m just learning how to play hockey all over again.” He started skating again regularly in late July.

“It’s been a good last month for me getting back on the ice, getting the legs, getting the speed going, getting the hands back a little bit,” he said. “I’m sure there’s going to be some rust throughout camp and throughout the preseason, especially having not played in eight or nine months. But by the time the regular season comes I’m sure I’ll be ready to go.”

Being sidelined for so long – Kane visited his new teammates briefly after the Feb. 11 blockbuster deal but had never skated with them until Wednesday – gave him a taste of what retirement would be like.

“Hopefully,” he said, “that’s in 13, 15 more years. Getting back on the ice, I think it was kind of like starting something new. I’d been off … for the longest I’d ever been in my life. So just kind of getting that discipline back with training, kind of learning how to battle through the pain a little bit in terms of getting back into shape was tough. But I feel good.”

At just 24 years old, Kane said he also feels “old.” This season, believe it or not, will be his seventh. He understands as a veteran on a young team the Sabres expect him to be a leader, a role he wants to “embrace and enjoy.”

“That’s the way a career usually naturally progresses,” Kane said. “I’m going into my seventh season. I do have that experience to be able to lead and help out. But at the same time, the best way to lead is usually on the ice.”

Kane liked O’Reilly’s acquisition so much he tweeted general manager Tim Murray’s name and four hands applauding after the huge trade with the Colorado Avalanche on June 26.

“Tim made some big moves to kind of push our team to the next level on paper,” Kane said. “Now we got to go out and prove it. … Everybody’s optimistic heading into the season.”

Kane draws some of that optimism from getting to know Bylsma.

“Real easy guy to talk to,” he said. “I was here the first day he got hired, so that pretty interesting. So I got to know him pretty well. (He) seems like a real heady coach, real smart and I think he’s real detail-oriented. So I think it’s going to be clear and concise and make it easy for us players to know what to do on the ice.”