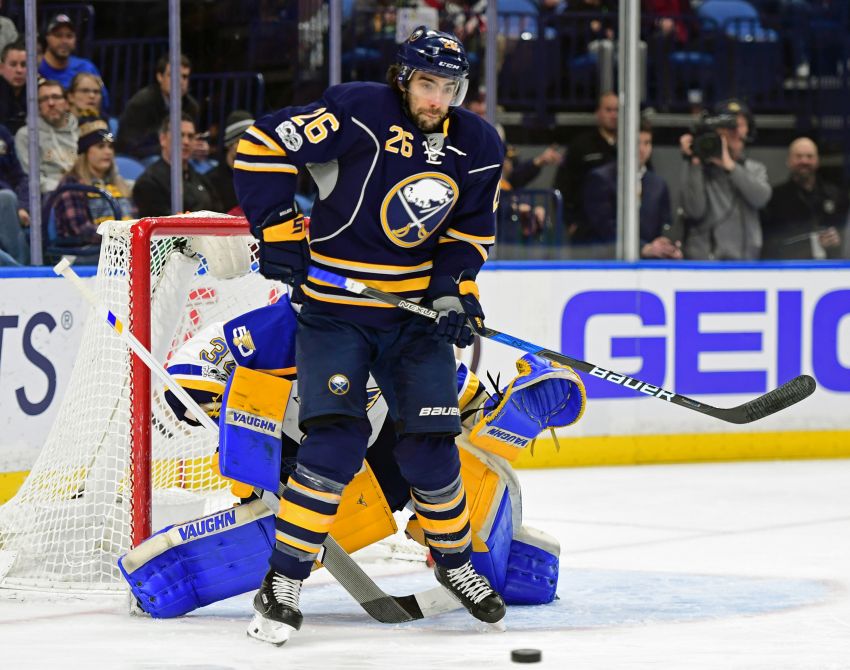 Matt Moulson is at his best around the net. ©2017, Dan Hickling, Olean Times Herald

But Moulson, as he has all season, didn’t stay with the same linemates long inside KeyBank Center.

Jack Eichel filled in for Deslauriers, a winger with zero points this season. Moulson also played on the top power-play unit, a promotion with winger Sam Reinhart out.

Moulson, 33, has been moving up and down the lineup all year, skating with about six or eight forwards.

“We got a lot of good players on this team, so it’s not hard to play with guys when you’re out there,” Moulson said.

The problem for Moulson has been getting out there. The three-time 30-goal scorer had averaged just 11 minutes, 40 seconds an outing and skated under 10 minutes in 16 of the last 22 games entering Sunday.

Moulson was ready Tuesday, when the flu sidelined winger Evander Kane for the Sabres’ 3-2 win in Ottawa. He enjoyed his best game in months subbing beside Eichel and Reinhart, skating 15 minutes, 42 seconds, his highest total since Dec. 16.

Moulson scored the tying goal – he hadn’t scored at even-strength since Jan. 12 – early in the third period, knocking Reinhart’s shot in at the net, where the veteran’s at his best.

“It was his best skating game that he’s shown,” Sabres coach Dan Bylsma said. “I thought he was really good on the forecheck with them and giving them the opportunity to have the puck in space. It showed up with the result of the goal.”

Moulson said: “Those two guys are tremendous. I felt it was really easy to read off each other that game.”

Moulson has 12 goals and 22 points in 59 games. Nine goals and five assists have come on the power play. He scored four times in the first five games.

His production has slowed over the past few months. Still, he’s producing some offense. About a year ago, as he struggled through a brutal eight-goal season, he began changing his work habits. A change was noticeable when he arrived at training camp.

“I worked extremely hard on a lot of things,” said Moulson, who’s in the third season of a five-year, $25 million contract. “I know I can be successful in this league, so just keep working. It’s not just something you do over the summer and stop.”

“It would be big,” he said of the number. “You want to be there. You want to contribute. … Personal stats kind of come when your team’s doing well.”

Defenseman Taylor Fedun cleared waivers Sunday and was assigned to the Rochester Americans.

Bylsma was concerned Fedun, 28, would be claimed. The Princeton product only earns $600,000 on his one-year contract, can move the puck and produce offense.

“I was a little nervous he wouldn’t squeak through there,” Bylsma said. “He’s a good part of our depth, defensive corps. He’s been able to play some big games for us, some good games for us. We still have that in our bag.”

Fedun had seven assists in 25 games with the Sabres. He began the year with the Amerks, compiling four goals and 17 points in 20 contests.

Fedun played for the Amerks on Sunday.