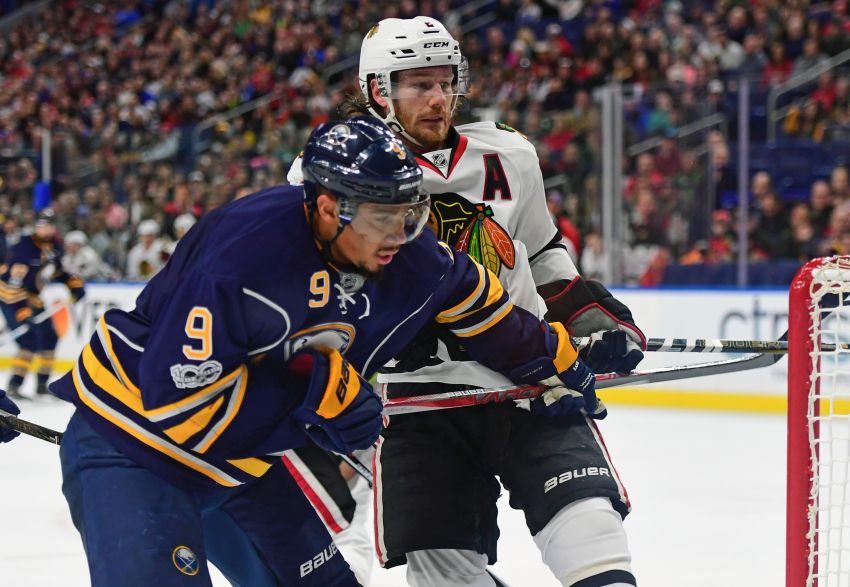 BUFFALO – It’s funny what a short three-game winning streak and few strong weeks can do for an NHL team.

After being given up for dead earlier this month, the Sabres have roared back into the playoff race, inching to within two points of the Atlantic Division’s final playoff spot and the wild card by Sunday afternoon.

Sure, clubs with games in hand stand between the Sabres and those coveted spots. Still, they’re back in the thick of the race.

When was the last time the Sabres could say that in late February?

Even after the Chicago Blackhawks throttled them 5-1 on Sunday, the Sabres began their much-needed five-day bye week – they went 6-4-1 in a dizzying 18-day stretch – feeling good about themselves.

“We’ve put ourselves back in a position to be fighting for our lives to be in the playoffs,” Sabres defenseman Josh Gorges said. “I think we have this break coming up. It’s almost one of those things I think we’re feeling good as a group, you’d like to keep rolling, keep playing.

“But we’ll take the break. … It’ll be good for us to step away from the game and clear the minds.”

At this juncture, the Sabres need to enjoy some time off. They don’t play again until Saturday in Colorado, the start of another busy run.

“We’re playing a lot of games right now because we’re getting five days off,” Sabres coach Dan Bylsma said. “Then we come out of it and play three in four, so having played the amount of games we’ve played, I think you need a break.”

But, Bylsma said, that much time off “is an eternity in the hockey season.”

“It’s a break you don’t really want to get to at this point with the way we’re playing and the wins we’ve put together,” he said. “You want to maybe forego the five days and keep going.”

The Sabres have endured some bumps in February. Goalie Robin Lehner, for example, called out himself and his teammates after last Sunday’s 4-2 loss to Vancouver.

But they morphed into a stronger club this month, Gorges said. They’re three points from the division’s last playoff spot and still two out of the wild card.

“Lehner’s been outstanding for us,” Gorges said. “Then sometimes you start getting this feeling, this belief that we do what we’re supposed to, we stick together, whether you’re up, whether you’re down, you don’t change the way you play. You start coming together as a group, then you find ways to win. You just keep hammering it home.”

The Blackhawks, perhaps the NHL’s model franchise, hammered the Sabres for the 11th straight time (0-9-2). They haven’t beaten the Blackhawks since a home victory Dec. 11, 2009.

Then the Blackhawks dominated the rest of the night before a capacity crowd of 19,070 at KeyBank Center.

“It just looked like we weren’t sharp,” Gorges said. “No reason for it. No excuse for it. But the last little while we’ve been playing some good hockey, played a lot of hockey here recently.”

Marian Hossa’s 520th NHL goal 9:40 into the second period put them up for good. Jonathan Toews scored later in the period. Artem Anisimov and South Buffalo’s Patrick Kane scored in the third period.

Kane now has 10 straight 20-goal seasons and eight goals and 15 points in 13 career appearances against his hometown club.

“We’ll forget about this one,” said Lehner, who made 32 saves. “It’s unfortunate. … You know what? we’ve been playing good hockey and we can’t get away from ourselves here for one game.

“After the break, it starts again. We’ve got to string games together. … We have the ability to do that and get back in the race. This game would have been nice to win but it doesn’t change anything.”