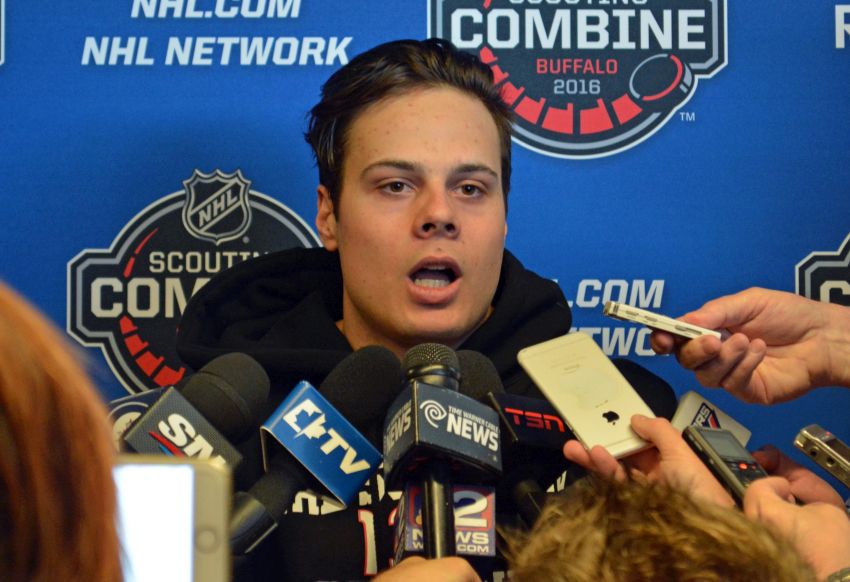 BUFFALO – Auston Matthews first experienced the heated rivalry between the Sabres and Maple Leafs here at the NHL Draft, when the Toronto contingency wildly cheered the first overall pick and the hometown fans mercilessly booed their enemy.

“It’s a lot of booing,” Matthews told reporters Wednesday in Toronto after the Leafs prepared for tonight’s game inside KeyBank Center, the rookie’s first appearance here since getting selected June 24.

Expect another loud, bipartisan atmosphere throughout Toronto’s first visit with Matthews, who, thanks to an astonishing four-goal NHL debut, has scored six goals and 10 points in his first 10 games.

Matthews, 19, knows he will likely be the No. 1 target of Sabres fans for years to come.

“I was actually thinking about that the other day,” the center said of more booing. “It’ll be nice. I think the guys were saying there’s usually a pretty good crowd, a lot of Maple Leafs fans that go.”

The game won’t be the same without Eichel’s presence.

On Tuesday, Matthews’ first-ever NHL matchup against Edmonton Oilers superstar Connor McDavid was hyped as the start of a rivalry between the two ultra-talented youngsters.

Toronto’s 3-2 overtime win was must-see TV across Canada (the game wasn’t televised in the U.S.). Legends Wayne Gretzky and Bobby Orr, whose agency represents McDavid, even flew in to watch.

In reality, Eichel, the mega-prospect drafted after McDavid, might become Matthews’ main rival. The Americans play on emerging teams in the same division – that’s four or five meetings a season – two hours from each other.

It would be a natural rivalry, even if Eichel and Matthews are really friendly foes. Besides, McDavid’s Oilers play in another conference and only face Atlantic Division teams twice a year.

Matthews said he recently spoke to Eichel and wished him well in his recovery. The two planned to possibly meet up Wednesday night.

Whatever happens tonight, Buffalo will always have special meaning to Matthews.

“It was a big step, a big dream come true right there,” Matthews said of getting drafted. “I think Buffalo, the (since-renamed) First Niagara Center, will always have a special place in your heart because you were drafted there.”

The Sabres, who have won three straight games following a 1-3-2 start, had Wednesday off after flying home Tuesday night from Minnesota, where they beat the Wild 2-1.

Incredibly, seven of Larsson’s last 12 goals have been game winners. The Swede, 24, only has 18 NHL goals, so a whopping 39 percent have been winners.

“A little bit of luck, I guess,” Larsson told reporters Tuesday in Minnesota.

“It’s unfortunate,” Bylsma said. “He just went down … and his skate got caught in a rut, had a tweaking of the knee.”

With Bogosian out, four of the five healthy defensemen skated more than 22 minutes each, including Dmitry Kulikov, who played a team-high 27 minutes, 40 seconds.

Bailey has been playing left wing with the Rochester Americans “for just such an emergency,” Bylsma said.

The Sabres recalled the Williamsville native with rookie Hudson Fasching day-to-day with a groin injury.