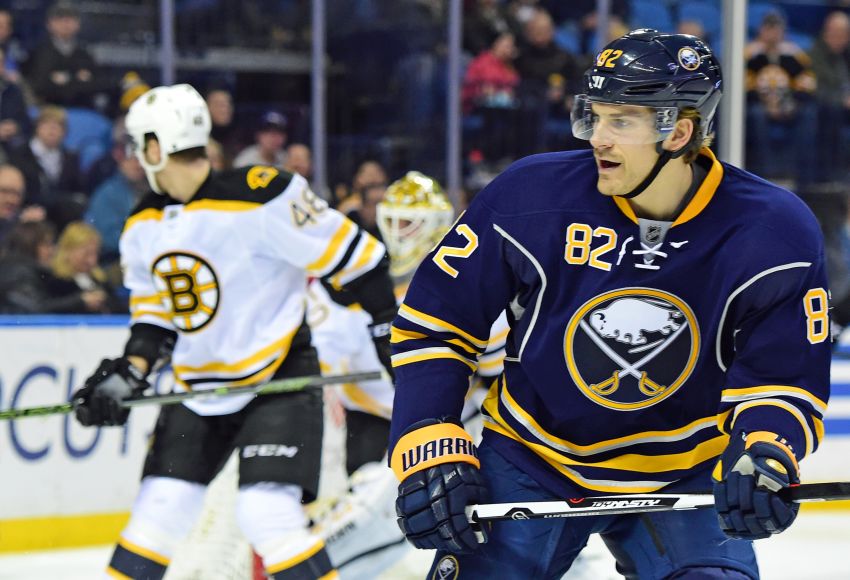 BUFFALO – For perhaps the first time all season, enigmatic forwards Marcus Foligno and Johan Larsson are playing well at the same time, meaning the Sabres have finally started receiving some notable contributions from their third line.

For the last four games, Foligno, Larsson and captain Brian Gionta have been one of the Sabres’ strongest trios, contributing some much-needed offense and grit while often facing the opposition’s best.

“We’re doing the little things,” Gionta said Friday prior to the Sabres’ 4-1 loss to the Boston Bruins inside the First Niagara Center. “You watch us play, we’re cycling down low. We’re spending time in the offensive zone, but it’s us coming out of the D-zone.”

“It’s got to be a north-south game,” Sabres coach Dan Bylsma said about Foligno. “He gets a little away from it when he goes east-west. There’s a couple of plays that he has a tendency to make that we’re trying to get away from his game.

“He’s played north. He’s been first on pucks, big-bodied. He’s been a physical presence for us on that line. I think his best and most effective hockey has been the last four games.”

Like the last three seasons, Foligno has been inconsistent all year. He sat out five straight games a month ago.

“It’s been frustrating at some times,” Foligno said about his season. “You feel like you’ve been feeling pretty good and playing pretty good. It just hasn’t been getting the result out there. But right now, I feel really comfortable with my game. We’re getting results out there.”

Meanwhile, Larsson, 23, had been a colossal disappointment this season. The Swede’s assist Sunday was only his fifth point. He still only has one goal.

Recently, though, Larsson has been showcasing some of the tenacity that helped him thrive as the Sabres’ No. 1 center late last season. Larsson fought Boston’s Max Talbot in the first period Friday, his second NHL scrap.

“I think Lars has been maybe his best three games of the year his last three,” Bylsma said. “He’s played hard, he’s played physical and hard to play against. He’s played with an edge, he’s got the other team knowing he’s on the ice being physical. …

“In the situation that line’s been in, it’s one we’re counting on (them) to play against, in defensive situations, other teams’ top lines at times, especially on the road.”

With eight healthy defensemen, Mark Pysyk and Carlo Colaiacovo sat out again for the Sabres.

Pysyk, a steady defender the Sabres sorely missed as he recovered from a broken foot, has been scratched twice since he was summoned from his AHL conditioning assignment. He hasn’t played since Nov. 17, a 26-game stretch.

The Sabres’ two-game winning streak has kept Pysyk, who skated in the pregame warm-up Friday, shelved.

“He’s not going to have to wait for a loss to get in,” Bylsma said.

Colaiacovo has been scratched four straight contests and 15 of the last 16.

Some strong play from defenseman Mike Weber, a regular healthy scratch earlier this season, has impressed Bylsma and kept Pysyk and Colaiacovo sidelined.

“He’s solid (and) hard guy to play against, been physical for us,” Bylsma said. “I like the way … (he’s) been moving the puck for us out of trouble.”