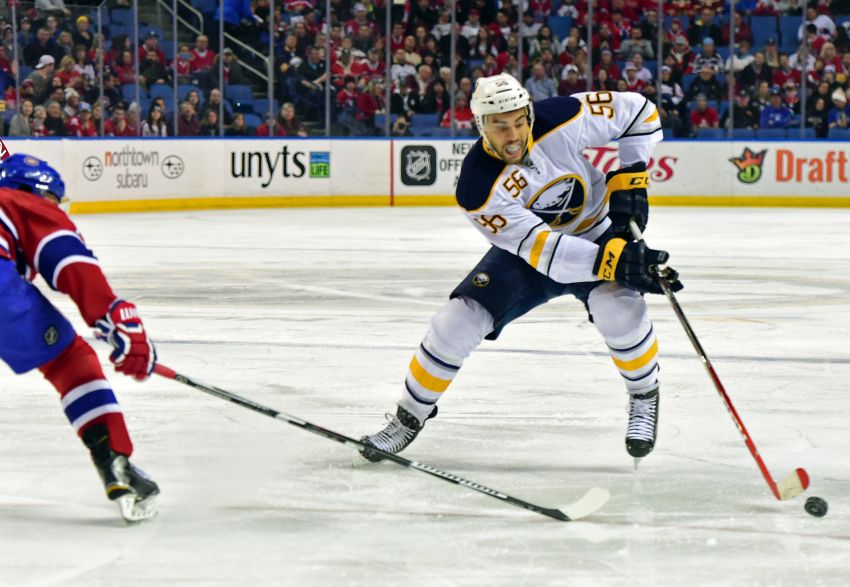 Bailey, 20, had just become the fifth Buffalo-born player to skate for the Sabres, and before Buscaglia went to bed in her Philadelphia hotel room, she looked at her mother.

Having raised Bailey as a single mother, Buscaglia enjoys a unique relationship – “Playing both the role of my mom and my dad,” Bailey called it – with her son.

“He trusts me and he knows I have his back and his best interests at heart,” Buscaglia said. “The journey is definitely a father-and-son kind of thing.”

That trust has paid off for Bailey, who should play his third NHL game this afternoon when the Sabres host the Colorado Avalanche inside the First Niagara Center.

“As a mother, she knows me probably better than I know myself,” Bailey said.

Looking back now, they agree the decisions Buscaglia made and the patience she exhibited boosted Bailey’s career. Everybody, she said, wanted to make Bailey a man when he was 10 years old.

“When you have a really gifted athlete as a kid, everybody wants to rush everything,” Buscaglia said. “So I think it’s the one thing that kind of saved him.”

Six years ago, instead of leaving home to play in a junior league in Ontario at the suggestion of former NHL player Tie Domi, Bailey stayed put. Of course, Bailey wanted to go. Four years ago, he briefly left Buffalo and moved in with Sabres legend Pat LaFontaine, who was coaching the Long Island Royals, an under-16 junior team.

That decision, Bailey said, was a lateral move and “kind of frowned upon.” Some people were urging him to go bigger and play in the Ontario Hockey League or the United States Hockey League, two higher leagues that held his rights.

“We’ve put a lot of thought and time into every decision that I’ve made,” Bailey said.

But the season under LaFontaine helped transform the 6-foot-3, 206-pound Bailey, who said he filled out his body, got stronger and found himself as a player.

“I kind of slowed things down, but I think everything we did worked out the way it was supposed to,” Buscaglia said.

Eventually, Bailey chose to play for the OHL’s Kitchener Rangers, where he morphed into a lethal scorer, instead of Michigan State in 2012.

Bailey, the 52nd overall pick in 2013, has quickly developed into the Sabres’ best AHL forward prospect as a rookie in Rochester this season. After compiling four goals and six points in three games, he noticed the Americans’ coaches were “all over me for a lot of different things” during Wednesday’s practice.

It turned out they were just having some fun.

“They called me over and I couldn’t imagine what I did wrong now,” Bailey said. “They told me, ‘Congrats, you got called up.’ It was special.”

When Bailey called his mother with the special news, Buscaglia said she screamed out loud and cried in her office.

“It was just a whole bunch of emotion really fast,” she said.

Bailey enjoyed one of the best Sabres debuts in recent memory, pumping seven shots on goal in an ugly 5-1 loss to the Flyers, the highest total in a Buffalo debut since Alexander Mogilny in 1989.

“It’s kind of something I’ve been dreaming of my whole life,” Bailey said. “To be able to share it with them (Thursday) night, it was amazing.”

With about 100 total supporters watching him Friday, Bylsma bumped up Bailey’s minutes and awarded him a plum assignment on the right wing beside slick center Jack Eichel and Jamie McGinn. Bailey wasn’t quite as impressive as Thursday, although had some strong moments and nearly scored.

“When you’re rating a player’s game, you’re probably going to look at the first game he played as the top of the line game from him,” Bylsma said. “(Friday) you saw some of that … speed and size and play in the offensive zone and at the net.”

When Bailey helped create Josh Gorges’ second-period goal, it appeared he might earn his first NHL assist. He said his teammates congratulated him when he got back to bench. But the official scorer ruled the goal was unassisted before awarding Eichel and McGinn assists.

Either way, the play impressed Bylsma.

“It’s a play I really liked, just using his size and body down low to win a puck and create room and space,” he said.

Buscaglia made it back to Buffalo to watch after a brief scare. When her flight home was canceled, she flew into Syracuse, rented a car and drove home.

“To be a single parent and make all my tournaments, I can’t even honestly remember of game of mine she missed growing up,” Bailey said.

Or in the NHL.