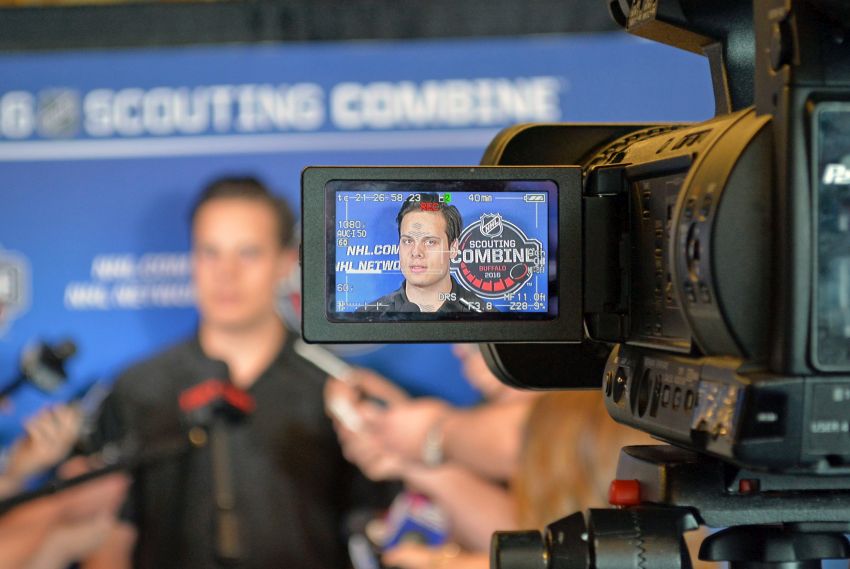 BUFFALO – This city, the site of the 2016 NHL Scouting Combine and Draft, will always hold a special place in Auston Matthews’ heart.

After the combine concludes today, hockey’s biggest prospect will return in three weeks, and barring a seismic, unexpected turn of events, the Toronto Maple Leafs will select Matthews No. 1 overall June 24 inside the First Niagara Center.

The pinnacle of his young career will always be tied to Buffalo.

The Arizona-born Matthews has enjoyed experiencing Buffalo this week, a place he called “a nice little city to walk around in.” Still, by October, the slick center will be the face of the hated Leafs, the Sabres’ closest and fiercest division rival.

In these parts, Matthews could be public enemy No. 1 for a decade or more.

“I guess we’ll see what happens,” Matthews told a throng of reporters and cameras Friday inside HarborCenter. “I guess that wouldn’t be too bad of a thing.”

Of course, Matthews knows his visits as an NHL player won’t be as welcoming. While he’s only 18, Matthews is mature beyond his years. Just like Connor McDavid and Sabres center Jack Eichel, the top two picks last year, he speaks like a veteran in his mid-20s.

Matthews watched McDavid and Eichel conduct themselves amid an incredible amount of hype in 2015 and noticed “the way they kind of blocked out pressure.”

“They’re really under the microscope,” he said. “They were playing in North America.”

Matthews never experienced that type of pressure. Instead of playing junior or NCAA hockey in his draft season, he opted to compete professionally against men in the Swiss-A League, compiling an incredible 24 goals and 46 points in only 36 games for Zurich.

Incredibly, Matthews, who was born September 17, 1997, would have been eligible for the 2015 draft if he had been born two days earlier.

“I’ve thought about it before, but that’s when I was born,” Matthews said. “You can’t change that. I think it’s nice to kind of get that extra year to kind of grow into your body some more, develop a little bit more.”

Even a year ago, Matthews possessed the talent to be picked with McDavid and Eichel.

“The three of them we would’ve been talking about last year,” Marr said.

But Matthews will still be linked to Eichel for a long time. As the top young talents on their respective teams, they will almost certainly be talked about in the same breath as they face each other at least four or five times a season for years and years.

“If that would happen, that would be awesome,” said Matthews, who will be teammates with Eichel and McDavid at the upcoming World Cup. “He’s a great player. I’ve played against him once before.”

Matthews projects to be the No. 1 center on a revamped Leafs team many observers believe will morph into a strong contender in a few years. The Leafs fielded a less-than-stellar lineup in 2015-16, selling off veterans while plummeting down the standings. Like the Sabres a year or two ago, they piled up assets for the future.

“Obviously, they’re going through a rebuild,” Matthews said. “But you see the key pieces they have – the coach, the GM, the prospects they have. They’re definitely going to be a very exciting team moving forward.”

Is Matthews ready to shoulder the franchise?

“I think you kind of try to block that kind of stuff out,” he said.

Matthews has blocked out a lot. He said he still hasn’t even examined where he would fit in with the Leafs.

“I’m still waiting to see how it works out here in a couple weeks,” he said. “That kind of stuff, it’s so out of your control. You never really know what could happen.”

New Americans coach Dan Lambert won’t keep assistant coaches Paul Fixter and Chris Taylor, who were part of Randy Cunneyworth’s AHL staff in 2015-16, according to the Rochester Democrat and Chronicle.