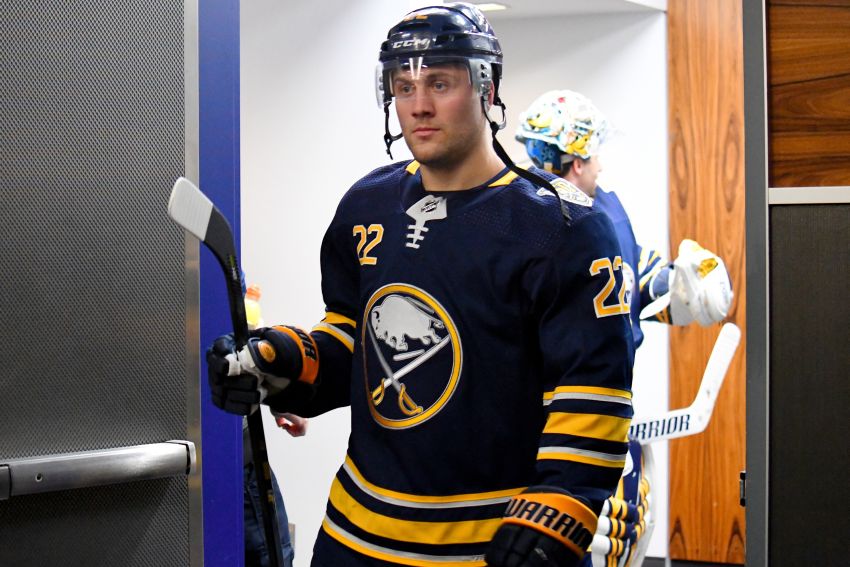 Naturally, as the season progressed, the Sabres’ annual implosion sapped some of his happiness.

Still, Larsson, 28, enjoyed perhaps his best NHL campaign. The tenacious Swede entrenched himself between Zemgus Girgensons and Kyle Okposo early in 2019-20, helping the trio morph into one of the league’s best checking lines.

But Larsson, one of three Sabres remaining from the 2013-14 tank team, could bolt town as an unrestricted free agent Oct. 9. Considering all the losing and turmoil he has experienced, he might yearn for a fresh start somewhere else.

No wonder why Larsson has rarely looked very happy in Buffalo.

It’s unclear what Kevyn Adams, their new GM, thinks of Larsson. Adams had never worked in an NHL front office before Sabres owners Terry and Kim Pegula hired him to replace Jason Botterill on June 16.

Adams hasn’t spoken much about specific players or his plans for reshaping his team.

The Sabres, however, sorely need help down the middle. Their dearth of center depth has contributed to their run of futility.

Adams acquired Eric Staal on Sept. 6 to be the No. 2 pivot behind Jack Eichel, so he has started addressing the position. But losing Larsson would be a blow. He will almost certainly have suitors on the open market.

The COVID-19 pandemic could make this the oddest offseason in NHL history. The 2019-20 season just ended Monday. No one knows when the next one will start. The league’s target of early December seems overly optimistic.

The league has set a flat salary cap of $81.5 million for next season. The Sabres, according to TSN, are considering an internal cap in the “low $70 million range.”

When asked about that number last month, Adams said he’s simply focused on constructing the team.

The rest of the Sabres’ notable free agents are listed below. Botterill acquired all of them except Girgensons.

Like Larsson, Girgensons could be itching for a change. The Latvian, 26, also joined the Sabres in 2013-14. He has played a whopping 489 NHL games without appearing in a postseason contest.

Girgensons has developed into a dogged third- or fourth-line checker capable of chipping in offense. He scored 12 goals in 69 outings – three short of his career high – before the NHL canceled the Sabres’ final 13 contests.

Considering the Sabres drafted Girgensons 14th overall in 2012, his career looks a little underwhelming. Still, he has often been an asset. Bringing him back could be a good move.

Vesey, 27, had scored 17 goals in each of the previous three seasons with the New York Rangers before the Sabres acquired him in 2019. Considering he was entering the final season of his contract and could earn extra opportunities in Buffalo, it felt like the winger might crack the 20-goal mark for the first time.

Instead, Vesey struggled to produce early. Finally, on Nov. 25, he scored his first goal in his 21st appearance. He scored nine times over his next 35 outings before ending the season in a nine-game drought.

Vesey managed some contributions, mostly as a checker and penalty killer. Still, Krueger scratched him in the winter.

It seems unlikely Vesey will return to the Sabres.

Frolik, 32, compiled more healthy scratches (four) than goals (one, an empty-netter) during his 19-game run with the Sabres. After arriving in a trade from the Calgary Flames in January, the winger’s ice time steadily dipped.

The Czech likely won’t be re-signed.

Simmonds’ acquisition from the New Jersey Devils before the trade deadline showed the Sabres, who stood six points out of a playoff spot, wanted to make a run. Like Frolik, the graying Simmonds, 32, needed a fresh opportunity.

The Sabres lost six of their seven games with Simmonds, who mustered just one assist. They likely won’t bring back the winger.

Fresh off a downright awful season in which he compiled an ugly minus-20 rating, Sobotka, 33, bounced back early last year, playing a key role in the Sabres’ hot start.

Then Sobotka suffered a season-ending lower-body injury Nov. 8 in Sweden. It seems unlikely the Sabres will re-sign the Czech forward, who often seemed unhappy in Buffalo.