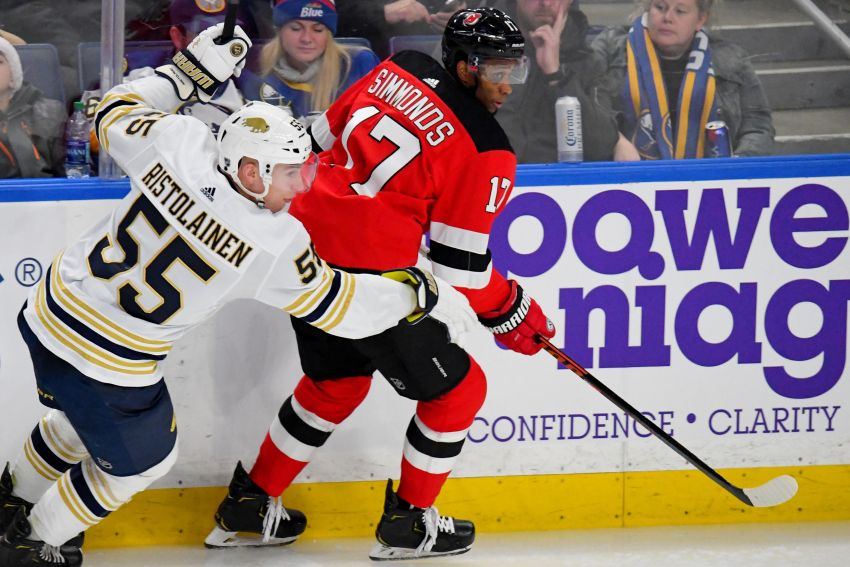 BUFFALO – Sabres newcomer Wayne Simmonds has a reached a critical point in his career. The 12-year veteran needs to play meaningful games. Staying another six weeks with the hapless New Jersey Devils wouldn’t have helped him much.

Simmonds, 31, has endured the worst season of his NHL career. Given his age and declining production – just eight goals in 61 games this season – he needs to demonstrate he still possesses the skills that have helped him score 251 goals.

“I’m a UFA at the end of the year, whether I stay here or I go, I’ve got to prove myself,” Simmonds said following Tuesday’s practice, his first with the Sabres. “So playing these meaningful games over the last 20 and trying to push this team into the playoffs, I mean, obviously, I know I’m not going to be the savior or anything here, but just another piece to help the boys out. That’s something I relish.”

Simmonds relished a fresh opportunity and liked the Sabres’ young talent so much he waived his no-trade clause to join them before Monday’s trade deadline.

“A lot of good people in that organization,” Simmonds said of the Devils. “I don’t regret signing there one bit. But at the same time, I wanted an opportunity to be in the hunt for the playoffs, to play those competitive games, and this was a perfect opportunity for me.”

That opportunity materialized because the Sabres have roared into the playoff chase, winning five out of their last six games, including two straight. They’re six points out of the Atlantic Division’s final postseason spot.

So for the first time in years the Sabres are in the hunt past the 60-game mark. Just playing meaningful late-season games is significant for them.

That’s why general manager Jason Botterill added assets before the deadline. Simmonds only cost the Sabres a conditional fifth-round pick. The Sabres also dealt Evan Rodrigues and Conor Sheary – two forwards who clearly weren’t in their future – to the Pittsburgh Penguins in exchange for forward Dominik Kahun.

Simmonds will likely make his Sabres debut tonight against the Colorado Avalanche, the start of a four-game road trip against Western Conference opponents.

Kahun, meanwhile, has been nursing a lower-body injury. He said on a conference call Tuesday he will play Friday if he can’t face the Avalanche. He did not practice Tuesday and was scheduled to meet the team in Colorado.

“I feel we come strengthened from the trade deadline,” Sabres coach Ralph Krueger said inside KeyBank Center. “No. 1, the confirmation of the path that we’re on here, we’ve got that ability to just go back to work tomorrow.”

Not surprisingly, the moves have energized the Sabres, many of whom are experiencing their first playoff push.

“The additions sends a message to the room they believe in us as a group now,” Sabres captain Jack Eichel said. “We had a good mood in here after our game Sunday. I think that the guys in the room really started believing in each other and believing in ourselves what we’re doing here, and I think when you go out and do something like that, you don’t sell players as much as you’re trying to add and make your team better, I think it sends a message to the room we’re trying to go for this right now.”

Simmonds’ experience and gritty style should help the Sabres down the stretch. He has played 902 NHL games, more than anyone on the roster.

“I bring some solid leadership to this group,” Simmonds said. “I play a physical game and you look at the lineup, there’s a lot of good players. I think I can complement these guys.”

Simmonds said his aggressive style includes getting “in peoples’ faces” in front of the net and fighting.

“That’s been a staple of my game for a long time and it’s not going to change now that I’m here,” he said. “I think it’s only going to enhance the talent around me.”

Krueger said of Simmonds: “He’s one of the best net-front presence guys in the league over the last decade.”

The coach also believes Simmonds’ voice can impact the Sabres. He said the team won’t ask him to do anything out of the ordinary.

“Just be himself and continue to do what he’s good at and step in to what we need him to do here to be the best version of Wayne,” Krueger said.

But the Sabres don’t have the Simmonds who once scored 63 goals over a two-year stretch. Since the Flyers traded him to the Nashville Predators before last year’s deadline, he has only scored nine goals in 78 outings.

“After so many years in Philadelphia and being such an important part of a lot of successful years there and being a centerpiece, sometimes it takes a player a while to adjust to the reality that that’s over,” Krueger said. “Let’s work with him now and let’s look forward and get him playing the game he wants to play, and we’ll get to know him really quickly.”