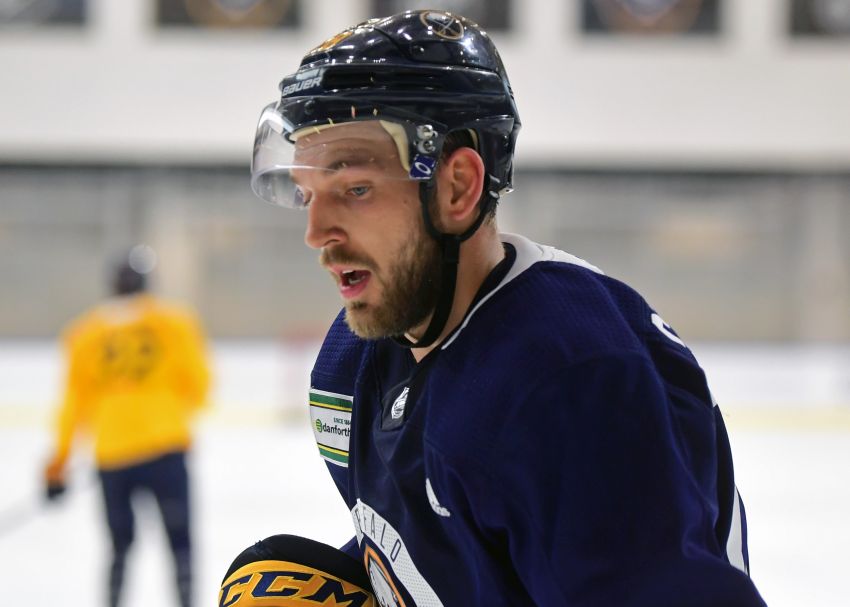 BUFFALO – Sabres winger Zemgus Girgensons laughed before wondering aloud, just four years into his career, exactly how many teammates he has played with here.

So, how many teammates did Girgensons play with over his first four NHL seasons? Try 92! That list includes Jerry D’Amigo, Connor Knapp and Linus Omark, names even the most diehard Sabres fan might have trouble remembering.

At just 23 years old, Girgensons, believe it or not, owns the longest uninterrupted tenure of any Sabre.

But Pominville left and spent more than four seasons in Minnesota. Larsson and Ristolainen played 106 combined AHL games after they first joined the Sabres.

Girgensons stayed put as his team lost 66 percent of its games over a four-year stretch. Still, in some ways, the Latvian is grateful for the constant upheaval that accompanied those seasons.

“I’ve gone through a lot of changes,” he said. “I can’t say that’s a bad thing. It definitely gets you prepared, gets that kind of out of the way. I’m young and I have a lot of experience with that now.”

So far, that experience has been helpful. Right away this training camp, coach Phil Housley awarded Girgensons a coveted spot beside center Ryan O’Reilly and Kyle Okposo, a trio that comprises the Sabres’ last three NHL All-Stars.

“It’s awesome,” said Girgensons, the left winger. “I think we’ve had good chemistry out there. (I’m) playing with two top guys in pretty much the whole league.”

Girgensons, the 14th overall pick in 2012, quickly morphed into one of the league’s top youngsters in 2014-15, the season rabid Latvian fans voted him into the prestigious game.

With little talent available to him, former Sabres coach Ted Nolan relied heavily on Girgensons, making him the No. 1 center. Girgensons responded, scoring 15 goals in 61 contests while showcasing the talents of a future 20-goal scorer.

But as the Sabres improved their roster, Girgensons’ role diminished for two seasons under coach Dan Bylsma, who was fired in April. Girgensons switched between center and wing, often skating on the third or fourth line.

Girgensons has scored only 14 goals in his last 146 games.

“The offensive numbers weren’t there,” Girgensons said. “But the overall game was pretty steady. But definitely, I need to put more offense in.”

That’s one reason Girgensons moved to Boston for the summer and trained with other NHL players at Edge Performance in Foxborough.

“I worked on shooting,” he said. “I definitely want to contribute more offensively.”

If Girgensons sticks beside O’Reilly and Okposo, he will almost certainly receive more offensive chances. He offers his linemates a tenacious presence capable of being first on the forecheck, getting pucks back and zooming to the net.

“I can make room for them,” Girgensons said. “But at the same time, being on that line, it gives them an opportunity to be more offensive, too, create some plays.”

O’Reilly added: “His skill level and his hockey sense is so fun to play with. He’s always going to the right areas.”

Girgensons, a fourth-line center much of last season, is OK if Housley eventually moves him back to the middle.

“I can pretty much play half and half,” he said of center and wing. “At this point in my career, I’ve played enough games on both ends it doesn’t really matter where they plug me in.”

Like a lot of Sabres these days, Girgensons looks refreshed by the team’s new regime.

“You look at him, you see the excitement in his eyes,” Housley said.

“They’re sticking with it like we are,” Girgensons said of the fans. “We have to give it back to them and show them something.”