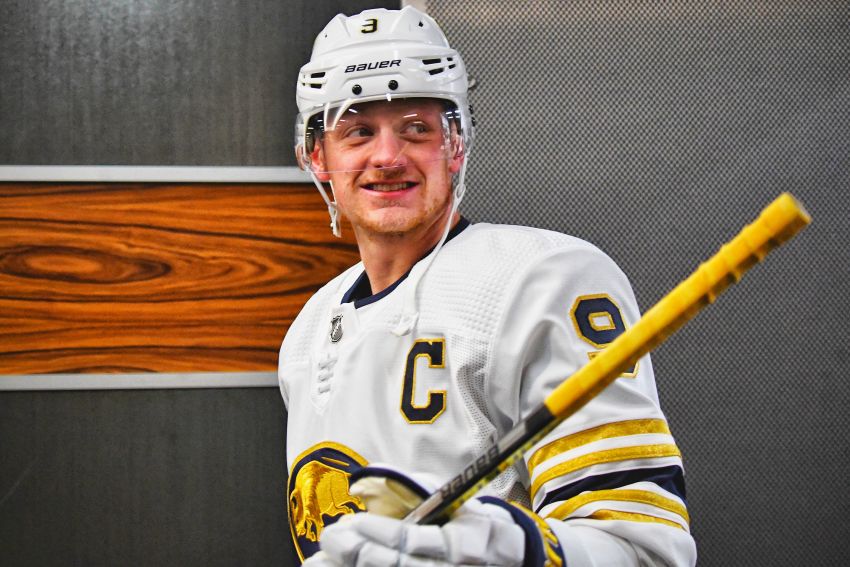 TORONTO – When the NHL’s hottest player comes here, you can bet the media throng wants to talk to him. Sure enough, Buffalo Sabres captain Jack Eichel drew a crowd this morning inside Scotiabank Arena.

Right now, Eichel, 23, is scorching. The slick center has a career-best 16-game point streak entering tonight’s contest against the Maple Leafs, the league’s longest this season.

Eichel has already scored 23 goals in 34 games, five off his career high, the league’s second-highest total. His 48 points are tied for fifth.

The American is morphing into a superstar.

With the Sabres enjoying a strong start, Eichel has emerged as a leading Hart Trophy candidate as league MVP.

“It’s a huge compliment,” Eichel said of his name being mentioned among the NHL’s best players. “It’s a testament to the guys in the room. It’s a team effort, and you don’t have the type of success if the guys in there aren’t doing a great job as well.”

After a November slump, the Sabres, thanks in large part to Eichel’s scoring prowess, have earned a point in nine of their last 10 outings (5-1-4). They (36 points) rank second in the Atlantic Division, three points ahead of the fifth-place Leafs.

Coach Ralph Krueger said the Sabres will dress 12 forwards and six defensemen tonight. With a surfeit of defensemen, they’ve often dressed an extra one and only 11 forwards during the past month.

Defensemen Zach Bogosian will likely be a healthy scratch for the third straight game.

Goalie Linus Ullmark will start tonight against Leafs, his 13th nod in the last 17 games. In four career games against the Leafs, the Swede has compiled a 1-2-1 record with a 3.90 goals-against average and an .874 save percentage.

Believe it or not, this is the Sabres’ last visit to Toronto this season. They lost 2-1 in overtime here Nov. 30.