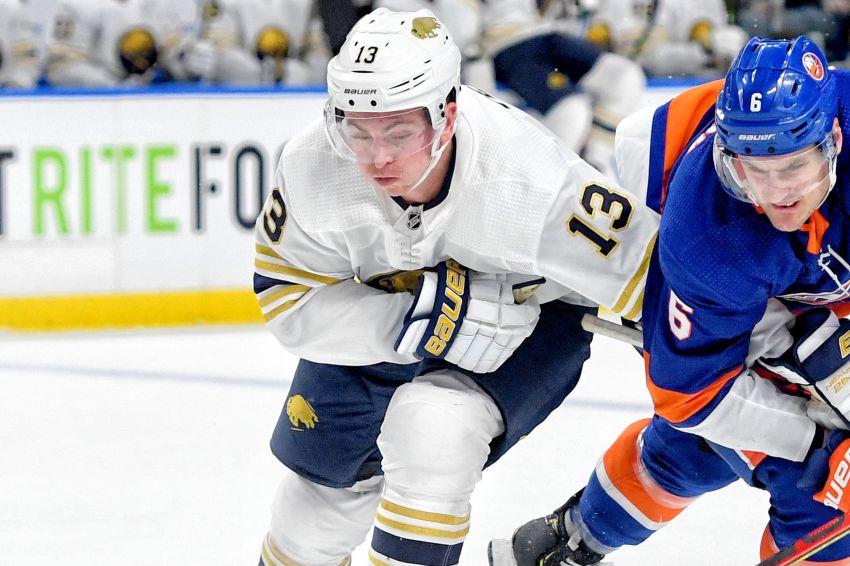 BUFFALO – Throughout his first 15 outings this season, winger Jimmy Vesey has embraced whatever role the Sabres have cast him in.

Vesey, 26, has spent the bulk of his ice time skating beside center Casey Mittelstadt and killing penalties. That regular spot on a scoring line hasn’t materialized.

“Jimmy coming in here didn’t have a lot of expectations about his role, which is really positive,” Sabres coach Ralph Krueger said.

But Vesey probably expected he would’ve scored a goal by now.

Among regular Sabres forwards, those meager totals are tied for last with Evan Rodrigues.

“I don’t think I’ve necessarily been thrust into a role to score,” Vesey said.

Still, the worst offensive stretch of Vesey’s four-year career hasn’t sapped his confidence. He feels good about his game.

His ice time has remained in the 13-minute range. With center Marcus Johansson sidelined, Krueger put him back on the power play Thursday.

“I’ve been very reliable,” Vesey said. “Talking to the coaches, they trust me in all situations. I think in talking to them, I’ve played solid, I just haven’t got the goals.

“I guess I’m just going to keep going with it and the law of averages, one of these pucks has got to go in.”

Vesey, who was acquired from the New York Rangers on July 1, averaged 17 goals over his first three NHL seasons. Many expected he could grow offensively this year, especially if he earned a spot beside top center Jack Eichel.

Having scored 16 even-strength goals in each of the last two years, he doesn’t rely on the power play to boost his numbers.

But other than a little checking duty on the No. 1 line late in games, Vesey has mostly stayed on the third or fourth trio. He hasn’t spent much time on the man advantage, either.

Vesey, an unrestricted free agent following the season, has started slowly in the past. Two years ago, he compiled one goal and two points in his first 12 games before finishing with 17 goals and 28 points in 78 contests.

He hasn’t scored since March 29, a 20-game drought in which he has pumped only 22 shots on goal. He has registered 19 shots this season.

He has scored just once in his last 34 outings.

But Vesey takes pride in how his game has evolved over the years.

“I’ve still been good on the penalty kill,” Vesey said. “I’ve taken pride in that this year. I don’t think I’ve played in a manner to have no goals. I think I’ve had a lot of chances throughout the year. I’ve just got to get going and things will go from there.”

Krueger believes Vesey is close to breaking out. Vesey generated confidence during the Sabres’ two-game trip to Sweden last week. In last Saturday’s 5-3 loss to the Tampa Bay Lightning, he recorded a season-high four shots.

“Hit the knob off the stick, had a bunch off the rush,” he said of his opportunities in Stockholm. “I thought I was skating well. I thought the looks have been coming.”

Krueger said Vesey’s “scoring is just going to be the final piece of the puzzle.”

“His willingness to do what the team needs in a positive way and work hard in that position is something we’ve enjoyed working with him,” he said. “He’s improving daily, understands more and more what we want and what he can bring the team.”

He added: “Everything else has been good.”