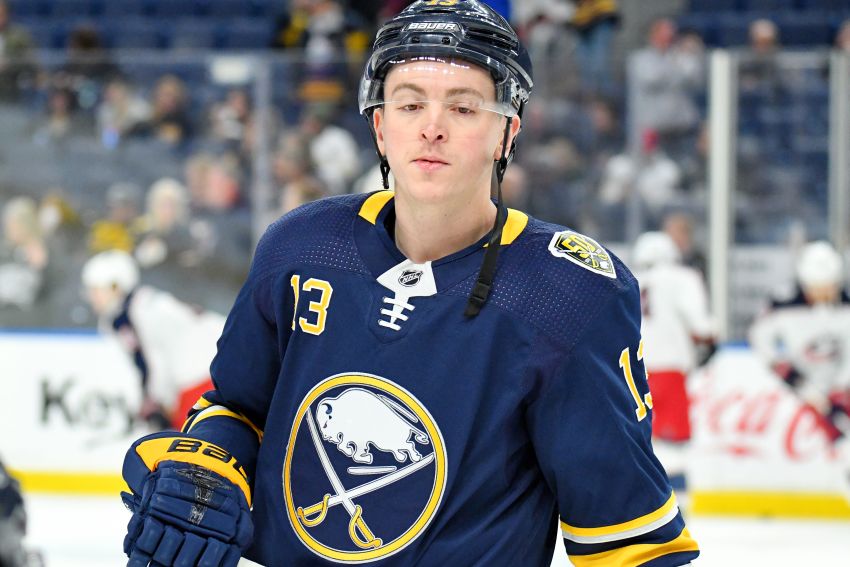 Jimmy Vesey has been a strong checker for the Sabres. ©2020, Micheline Veluvolu

Last week, Evan Rodrigues and Jeff Skinner, Eichel’s partner most of last season, moved up for about a period.

Sabres coach Ralph Krueger promoted Vesey for Saturday afternoon’s 2-1 overtime victory against the Columbus Blue Jackets, skating him 17 minutes, 56 seconds, his third-highest total this season. The American will likely play there again tonight against the Colorado Avalanche inside KeyBank Center.

During his short stint on the top line in January, Krueger said Vesey got away from the style that made him successful.

“Jimmy, this time around, is really relaxed and just playing his game and seems to be settling into that kind of a role where he might’ve catered a little bit too much to Sam and Jack and gave up his own game,” Krueger said following Monday’s practice. “I just think what we saw was something he can build on and we can build on here until we get Olofsson back.”

Olofsson, who has scored 16 goals in 42 games this season, is still week-to-week, meaning Vesey, an unrestricted free agent following the season, has an opportunity to remain with Eichel for a notable stretch.

Perhaps that will ignite Vesey. This could be his best chance to impress the Sabres before the Feb. 24 trade deadline.

“I’m just worried about the rest of the season with this team,” said Vesey, whose Sabres rank sixth in the Atlantic Division. “We got 30 games left, and it’s time for us to make a push. Everyone here is buying in. We’re gonna dial ourselves in to make a push.”

Vesey’s first season here has been a bit underwhelming. When the Sabres traded the New York Rangers a third-round pick in 2021 for the Harvard product on July 1, he was expected to provide offense and showcase growth.

He scored 17 goals, including 16 at even strength, in each of the last two seasons. In a contract season with new opportunities available, his first 20-goal campaign seemed possible.

So far, Vesey’s biggest impact has been on the defensive side, killing penalties and developing into one of the Sabres’ top checkers.

He did not score his first goal until Nov. 25, his 21st appearance. He has scored six times in his last 28 appearances, a pace in line with his normal production.

“In the last 25 or so games, I think I’m starting to put up better numbers,” said Vesey, who has a team-high plus-12 rating this season. “Obviously, at the start of the year, I think I would’ve liked to chip in more, but the team was winning.

“Now we’re looking for secondary scoring. I think I’m focused on that but also my consistency defensively has been sound all year.”

Consistent offensive contributions from Vesey could help the Sabres get back in the playoff chase. Eichel, Olofsson, Reinhart and Skinner have combined to score 51% of the Sabres’ goals this season.

Vesey, a healthy scratch Jan. 12, has looked better since sitting out for the first time this season.

“The last couple games before break I was really skating better,” he said. “But, yeah, I think … sometimes just square yourself up and get back to the basics that got you here. I think such a long season, it can be easy sometimes to let your mind take over. I think when that happens, when you’re worrying about everything else, then it takes away from your game.”

Vesey, like most of the Sabres, has moved around the lineup since their scorching start ended in early November.

For the opening month, the Sabres enjoyed remarkable stability, showcasing the same lines and defense pairs most games. Since then, however, Krueger has constantly mixed up his trios and combos, often dressing an extra defenseman.

“It seems like we’ve gone 11 and seven a lot,” Vesey said. “But it’s more ice time for the forwards so there’s no excuses. We’re all playing at a high level. We got to block that stuff out and whoever we’re on the ice with we have a job to do. I think going we got to dial ourselves in and grind out some points.”

One thought on “Jimmy Vesey focused on Sabres, not thinking about trade deadline”