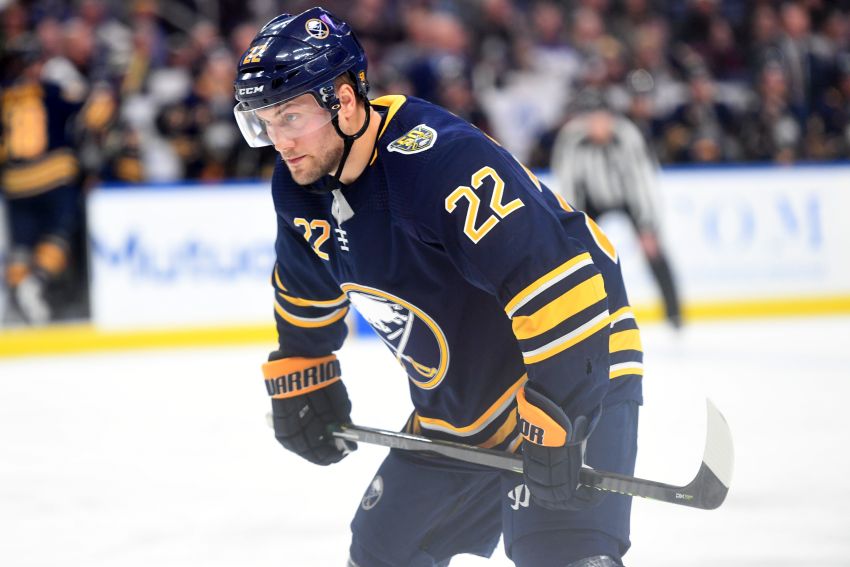 Johan Larsson has been one of the Sabres’ hottest players. ©2019, Micheline Veluvolu

BUFFALO – This is new, you know. Not only is Sabres center Johan Larsson piling up points, he’s also having fun and smiling.

“He wasn’t ‘Angry Larry’ last night,” Sabres winger Kyle Okposo said of his linemate’s nickname. “He’s having a blast. I think you can see it in his face.”

But Larsson, who has endured a lot of losing over his seven-year career, also seems happy.

Larsson has been a major contributor to the Sabres’ recent success, anchoring perhaps their sturdiest line between Okposo and Zemgus Girgensons and contributing some surprising offense.

In Tuesday’s 5-2 win over the St. Louis Blues, an amped Larsson celebrated wildly after putting the Sabres up 2-1 with 8.6 seconds left in the second period, jumping into the glass.

“Kind of a bad celly, I don’t know,” Larsson said following Wednesday’s practice inside KeyBank Center. “I was just so happy.”

The Swede started the play by slickly carrying the puck into the St. Louis zone. He also added an assist and hit the post in the waning seconds trying for a long empty-net goal.

“We felt all along he has an offensive upside that needs to be promoted and he needs to be confident bringing into the game, and you can see how much fun he’s having with that,” Sabres coach Ralph Krueger said. “But he’s a player that accepts his role in the team, works extremely hard at it and doesn’t really look left or right.”

Larsson’s three-game point streak is his longest since November 2016. Before his current run, he had compiled nine points in his previous 48 games.

“A couple bounces going my way,” Larsson said of offensive exploits. “I’ve got some confidence now it’s kind of bouncing my way.”

That confidence, of course, is critical.

“You see what confidence does to anybody,” Okposo said. “I mean, you look at the best players in the league, you look at Sidney Crosby, he goes through spells where he doesn’t have confidence. We’re all human, we all go through those ups and downs. Confidence is something you can’t really control. … (Larsson’s) got it right now.”

Larsson, one of three Sabres remaining from the 2013-14 tank team, has struggled at times over recent seasons.

After dislocating his elbow and wrist midway through 2016-17, he never seemed to get on track.

Before the season, Krueger, Larsson’s fifth coach with the Sabres, spoke glowingly of him.

“It’s nice that he believes in me and trusts in me and gives me some confidence,” Larsson said.

Larsson, 27, responded from the get-go, helping the Sabres roar out the gate. In the opening weeks, Larsson, Girgensons and Okposo formed arguably the team’s most reliable combination.

Since Krueger reunited it last week, the trio has combined for six goals and nine points in three games while often shadowing the opposition’s best. On Tuesday, top Blues center Ryan O’Reilly faced the line about half of his shifts, according to Krueger.

“We try to play the same style every night, go out and do all the right things,” Larsson said. “Of course, you want to play down there (in the offensive zone). I think we’re pretty heavy on the pucks and good down low and we have a little touch.”

Besides Larsson, Girgensons, another checker who has played for five coaches in seven years, has often looked like a different player under Krueger.

“They’ve embraced the responsibility they have,” Krueger said. “They give us an extra tool and another line that can play against any line of the other teams.”

“It causes them to just not think defensively, because they already do such good work defensively that they don’t have to think about being back, because our system kind of takes care of that,” he said. “You’ve kind of seen the confidence grow in the last couple weeks with Larry.”