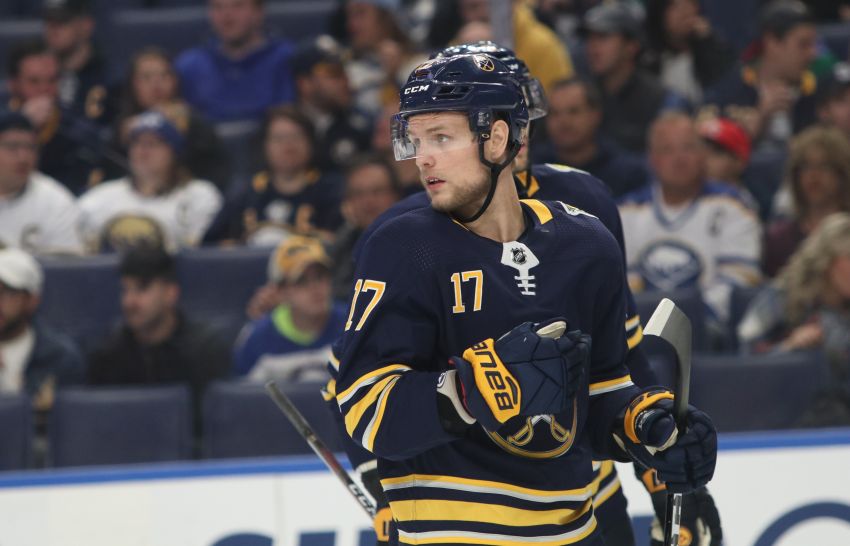 “He went right out there and cleanly won them and took us out of our end,” Krueger said following the Sabres’ 4-0 victory over the Dallas Stars inside KeyBank Center.

The Czech’s first point this season put the Sabres up 3-0, effectively sealing their fifth win in six tries.

Sobotka, a massive disappointment a year ago, has started showcasing signs of his old St. Louis Blues form, playing a tenacious two-way game.

Krueger’s decision to put Sobotka beside Skinner, a 40-goal scorer, and  center Marcus Johansson during training camp drew the ire of many fans.

After Sobotka, 32, compiled five goals and a wretched minus-20 rating last season, he seemed like a buyout candidate.

But the Sabres, who acquired Sobotka in the Ryan O’Reilly trade in 2018, kept the versatile veteran, who also plays center.

So far, Sobotka, who seems refreshed, has fit in well on the second line.

“Sobotka just doesn’t get the credit he deserves here,” Krueger said. “He’s allowing Johansson and Skinner some freedom to take some risks here and there. He’s an unbelievable physical presence on that line, and we’re so pleased he was rewarded with something offensively today.”

Krueger said Sobotka has “just been an unbelievable strength in character” showing the team’s youngsters how they must play.

Sobotka can also be a strong example for Johansson, a veteran Krueger shifted to center, a position he hadn’t played regularly since his rookie season.

“It’s really good for me to have him on my line, because he’s a natural centerman,” Johansson said.

The Sabres scratched Curtis Lazar, 24, a young veteran they recalled Sunday from the Rochester Americans to serve as their 13th forward.

“Training camp, there was a lot of players that left some really strong marks,” Krueger said. “Looking at the games ahead and the oppositions ahead, his ability to play up the middle and on the wing, add to the power play, right-handed shot and also be a PK guy – he’s been very versatile through training camp and we’re expecting all those options to be there for us.

“Above that, he adds physicality, he adds strength definitely.”

The Sabres left immediately after Monday’s win for Anaheim, where they begin a three-game road trip against the Ducks on Wednesday.

Fedun, 31, played 34 games with the Sabres over a two-year stretch before they traded him to Dallas last year.

Another ex-Sabres defenseman, Andrej Sekera, also played for the Stars.

Sekera, 33, signed a one-year, $2 million contract with Dallas after the Edmonton Oilers bought out the final two years of his six-year contract.