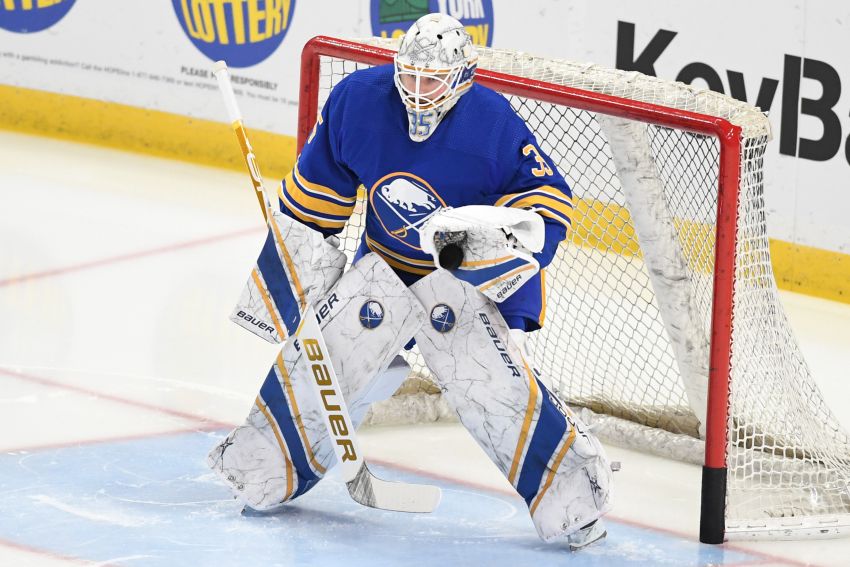 The Sabres have imploded without Ullmark, their No. 1 goalie. Their 13-game losing streak began Feb. 25, the game he suffered a lower-body injury.

“We need to integrate him into practice,” interim Sabres coach Don Granato said on a Zoom call this afternoon. “At some point, that’s the next step here. And at that point, we can evaluate when a potential return is.”

Ullmark has often been the Sabres’ backbone this season, compiling a 5-4-2 record with a 2.44 goals-against average and a .919 save percentage in 12 games.

Hutton has a 1-10-1 record this season. Meanwhile, Tokarski, a decorated AHL goalie, hasn’t played in the NHL since a 10-minute stint in 2016-17. Houser has never played in the big leagues.

The Sabres promoted Houser to the taxi squad because on Saturday they traded goalie Jonas Johansson to the Colorado Avalanche in exchange for a sixth-round pick in 2021.

Granato said the coaching staff informed the Sabres during Friday’s practice that Saturday afternoon’s home game had been postponed because of the Boston Bruins’ COVID-19 problems.

The interim coach then asked his players their comfort level in continuing the session. The Sabres, who endured a rough two-week COVID-19 pause last month, played Boston on Thursday, losing 4-1.

“The players collectively wanted to continue practicing and they continued to practice at a very intense level, so that was a great response from the standpoint of if you wanted them to be focused and engaged, they were,” Granato said.

Granato said said he doesn’t have any COVID-19 concerns.

“I don’t see any concern at this point,” he said. “Certainly, none that’s going to disrupt what we’re doing and what we want to do and lay out as a staff.”

The Sabres took Saturday off as a precaution.

Fogarty, 27, played one game for the Sabres earlier this season. He has compiled five goals and eight points in 10 AHL outings this year.

Based on today’s practice combinations, winger Tobias Rieder could be scratched tonight. Meanwhile, defenseman Henri Jokiharju could move back into the lineup for Matt Irwin.