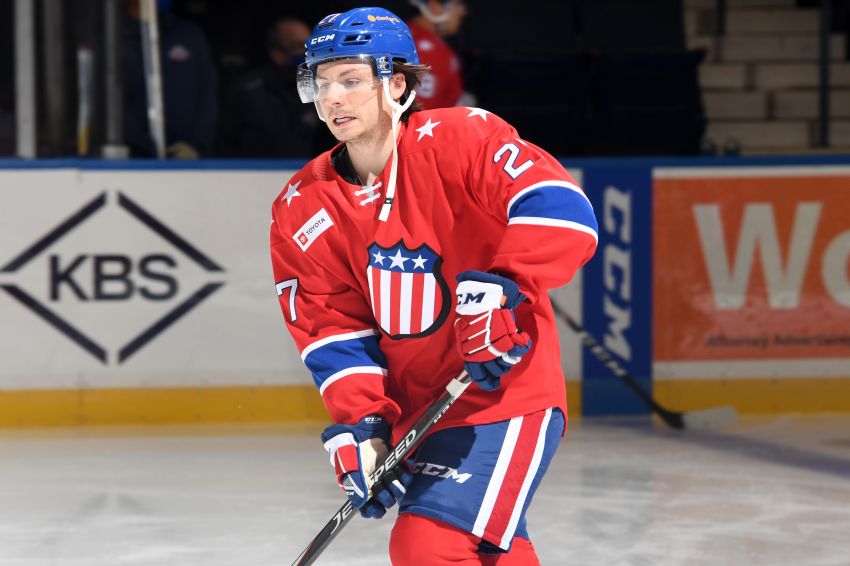 Later in the week, Jack Quinn, a winger Buffalo sent down, had to begin quarantining because he was with the Sabres when their COVID-19 problems began. Meanwhile, another forward the Amerks recently added, Remi Elie, was completing a mandatory quarantine following his arrival in Rochester.

Before the Amerks signed Patrick Polino, a North Buffalo native, and Patrick McGrath to professional tryouts Wednesday, they had just nine forwards available for Friday’s opener.

“You kind of start going through it, you get to the spot that you need capable players that you trust, and that’s huge when you’re adding guys in that you know what you’re going to get,” Amerks coach Seth Appert said on a Zoom call last week.

“I know how good of a college career he had,” Appert said. “I know that he’s fast and he’s competitive and he’s demanding to play against and he’s a great teammate, right? So in (the) circumstances that you’re in right now, that predictability’s important.

“(Are) there better players out there? Yeah, I’m sure there is. But I’m also sure there’s a lot worse. He’s a darn good hockey player that was looking for a break and I trust what he’s going to give us.”

The 5-foot-9, 172-pound Polino made his pro debut in Friday’s 3-2 loss to the Utica Comets, skating at right wing beside center Dominic Franco and Dalton Smith.

Polino played four years at RPI, compiling 24 goals and 52 points in 131 career games. By last season, when he set new career highs by scoring 11 goals and 19 points in 34 outings, Polino realized he could play pro hockey.

“Just probably then I thought it could be a reality,” he said. “I have a lot of friends that play pro, skating with them over the summer, kind of comparing myself with them and seeing how I stack up with them in the summer and stuff like that, I thought I could do that.”

After RPI fired Appert in 2017, Polino stayed in contact with him.

“My class, anytime something good happened for us at RPI, he would send us a text, which was nice, just kind of kept that line of communication open,” Polino said.

Before the Amerks named Steven Fogarty captain Thursday, he wore the ‘C’ during his junior and senior seasons at Notre Dame and last year with the Hartford Wolf Pack.

The winger earned recalls from the AHL to the New York Rangers over the last three seasons, playing 19 total games, including eight in 2019-20.

Fogarty said the Sabres reached out right away in free agency. He liked their offseason moves and heard good things about the organization, so he signed a one-year, two-way contract Oct. 19.

“It was just an exciting opportunity,” Fogarty said. “It was new eyes on me.”

“Over the last few years, I’ve learned my style, I suppose,” he said. “Growing up, getting drafted, you’re always drafted as an offensive player. I think going into college I kind of transformed into more of a defensive-type player.”

After Fogarty became acclimated to pro hockey, he developed his offensive side.

“Over the past few years, I think my role has been more offensive and more of a reliable guy to put up points but also I love being on the PK and take pride defensively,” he said.

The Amerks addressed their forward depth by signing forward Michael Mersch to a professional tryout Saturday.

Mersch, 28, has spent the last seven years in the AHL, scoring 122 goals and 245 points in 377 games. He played for the Texas Stars last season.

The Wisconsin product scored one goal and three points in 17 appearances with the Los Angeles Kings in 2015-16.

Luce, 22, is the grandson of Sabres Hall of Famer Don Luce. He has played 12 games for the ECHL’s Rapid City Rush this season.