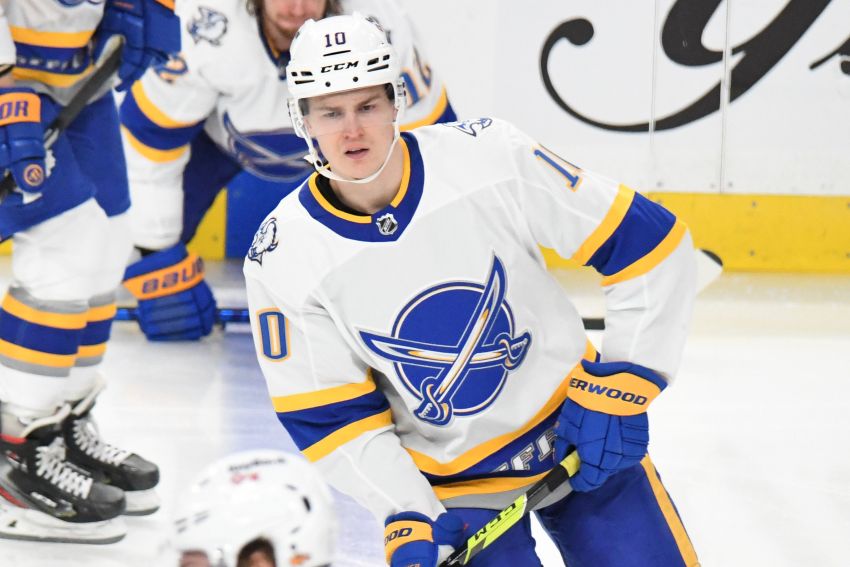 So naturally, Jokiharju, 21, wants to advance his game this year and develop his offensive side.

“It’s part of the development for a young defenseman to come in and be very conservative and then try to build a more attacking, offensive game on top of that,” Krueger said on a Zoom call prior to Sunday afternoon’s 5-2 loss to the New York Islanders. “We are in the negotiation with him right now on what exactly the best pathway is.”

Right now, Jokiharju must find a pathway back to the lineup from the taxi squad. The Sabres assigned the Finn to the practice group Sunday morning. He was a healthy scratch for Saturday afternoon’s 5-2 defeat at Nassau Coliseum.

Krueger, of course, downplayed Jokiharju’s demotion, saying the “move is more making roster spots available.” But he has struggled this season.

“It doesn’t really change the interaction of a scratched player or the process that he’s in or the workouts that he would get in a regular NHL season,” he said. “He would’ve just slipped out of the main starting lineup today. So let’s not overvalue that.”

While Jokiharju played 38 games for the Chicago Blackhawks in 2018-19, Krueger said the Sabres consider this his “sophomore season.”

“We did expect that he would possibly want to be doing more and get more active, more involved than he was last year,” he said. “And I think his strength lies in his ability to solve under pressure, to maintain pressure for the group and to play a simple game from the inside out.”

Jokiharju has compiled one goal, two points and a minus-7 rating in 17 games this season. The Sabres acquired him from the Chicago Blackhawks before last season in exchange for forward Alexander Nylander.

The Sabres recalled defenseman Brandon Davidson from the taxi squad Sunday morning and used him for the third time this season. To make room, the Sabres scratched defenseman Matt Irwin.

Sabres forward Casey Mittelstadt has spent all season shuttling between the taxi squad and active roster.

After playing five straight games, the Sabres assigned Mittelstadt, 22, to the taxi squad last week. He sat out three contests before being recalled Sunday morning.

As he has bounced between the two groups, Sabres coach Ralph Krueger said Mittelstadt has remained fixated on his ultimate goal.

“What I see him doing is staying focused on one single thing, and that’s becoming a consistent National Hockey League player,” Krueger said. “Whether he is playing in games, whether he is in the taxi squad or whether he’s practicing with the full squad, I’ve seen nothing but a pro in action.”

Mittelstadt, the eighth overall pick in 2018, skated at right wing Sunday beside center Curtis Lazar and Jeff Skinner. Krueger has utilized Mittelstadt, a natural center, as a winger nearly all season, mostly on the left side.

The move to wing could be permanent.

“He has truly got a competitive bite within him right now and we’re expecting him to eventually find his way into a regular spot,” Krueger said. “He looks to be crystalizing into more of a winger than a centerman. That can always change as a player evolves. But we do like the looks we’re getting from him on the wing.”

Mittelstadt assisted on Skinner’s goal Sunday. He has compiled one goal and four points in eight games this season.

To make make room for Mittelstadt, the Sabres scratched winger Riley Sheahan for the first time this season.