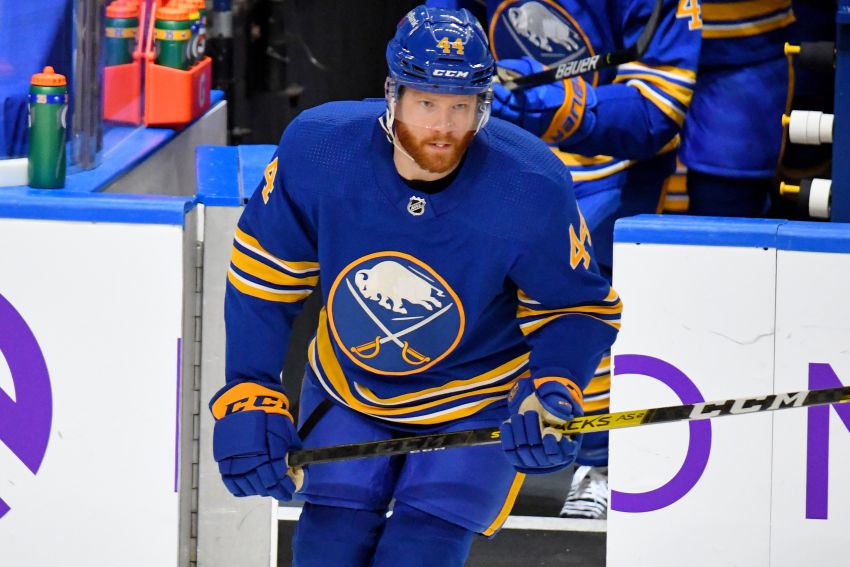 BUFFALO – Over the last few years, Sabres newcomer Matt Irwin has morphed from a regular into his team’s seventh defenseman.

After playing a career-high 70 times in 2016-17, Irwin cracked the 50-game mark just once in the next three years. Last season, which he spent with the Nashville Predators and Anaheim Ducks, he played a career-low 36 contests.

But Irwin, 33, has learned to embrace the role of an extra defender and the challenges that accompany it.

“You want to stay ready and have to stay ready,” said Irwin, who made his season debut in Tuesday’s 3-2 win against the New York Rangers at KeyBank Center. “That’s your job. So you treat practices like they’re your games, you work hard and you try to stay detailed in everything that you do and watch the games and see how they’re going.”

Irwin, of course, knew the Sabres signed him to a one-year, $700,000 contract to provide depth. The 6-foot-2, 189-pound veteran said he simply tries to prepare for every game like he’s going to play.

“That’s the way you do it,” Irwin said on a Zoom call prior to his 360th NHL game. “You go through game days, you take warm-ups so your routine is staying sharp in terms of preparing for a game. In your head, you got to tell yourself you’re playing until you’re told otherwise, and that’s kind of the mindset I’ve had for my career. You just kind of prepare that way and eventually the opportunity will come.”

Krueger, who has been dressing Irwin for the pregame warm-up, called him an “unbelievable pro and a positive spirit in our room.”

“He brings so much energy into meetings, into the off-ice, into the on-ice in practice,” Krueger said. “He’s got good feet, he’s quicker than we actually expected, makes good reads.”

Sabres defenseman Rasmus Ristolainen, 26, on playing his 500th NHL game Tuesday: “I guess it means I’m getting old and been around for a while and haven’t had too much success. So I’m extremely hungry and eager to get some wins and make the playoffs this year.”

Blackwell, 27, played his 35th NHL game Tuesday. The center joined the Rangers after two seasons in the Nashville Predators organization.